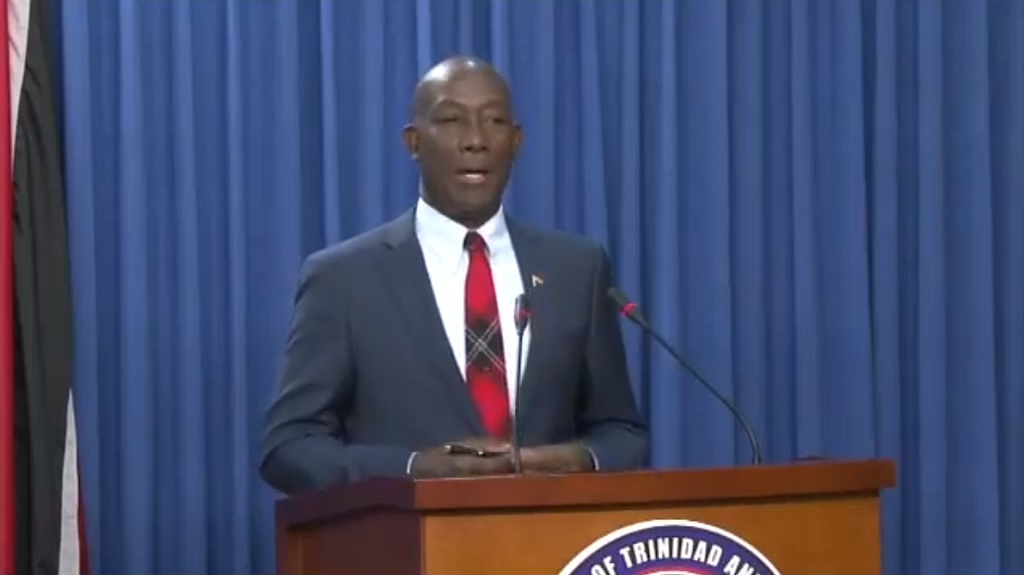 Prime Minister Dr Rowley explained further the withdrawal of luxury resort Sandals from Tobago along with other issues during a three-hour media briefing on Thursday.

Speaking to media at the Diplomatic Centre in St Ann’s, Dr Rowley berated media for their role in the negative publicity which he says lead to the resort’s cancellation of the proposed project.

Dr Rowley said that a previous application for a 500-room development at Golden Grove, Tobago, had been approved by the Environmental Management Authority (EMA) in 2006.

He said the objections expressed for that previous project were not as vehement as with this project.

“Under law, any person including the government wanting to build a hotel anywhere in this country, would have to subject itself to the requirements of that law….Even if we wanted to do it secretly, the law says we must come out and consult.”

“If the EMA had already granted approval to build 500 rooms, what that says to us who came 12 years later is that there is a parcel of land which has the propensity to become a hotel site.”

“When we had that choice of site. When they said they saw a site we could use, it turned out to be a site that was already approved for a hotel. When that approval granted why wasn’t there all this ‘ra ra ra’ in Tobago?”

2. Dr Rowley: Mangroves were not in danger

Dr Rowley said there were a number of environmental experts who would have been able to support the project with minimum impact on the environment.

“We invited experts in the environmental business…who says that if mangrove is involved that experts…would not know how to treat with it? It’s not the first time that we would have to impact on the environment and do so in a way that we benefit from what we have done while protecting the environment from the ravages of irresponsible conduct,” he said.

Dr Rowley also refuted claims that the Valencia-to-Toco highway extension project would affect the protected Aripo savannah, which it borders.

“That highway is not passing through the Aripo Savannah….that is one of the lies that have been propagated in this country so as to encourage you to not support a project.”

“Many of you in the media would have published that the highway threatens the Aripo savannah…we are not going to give up in the face of all these attempts to prevent national development,” he said.

4. Progress being made with Toco port

Dr Rowley added that government is working with trained environmentalists for an Environmental Impact Assessment (EIA) in order to get approvals for the proposed Toco port.

“We have trained environmentalists doing the EIA so as to get the approvals for the port at Toco…they’re opposing that,” he said.

5. No wrongdoing in ferry purchases

Dr Rowley again defended the purchase of two Australian vessels, saying all the required steps were taken for the purchases.

Dr Rowley said with a brand of the calibre of Sandals, a feasibility study for the site was not needed.

“The brand…is such a well-known, world brand. Why do you think the Chamber in Tobago is saying that this it is a loss to Tobago? Without going through an academic exercise manual, you could see…you don’t need a university study to do that. You could analyse things to paralysis…talk it to death.”

“The intention was that this Tobago Sandals would have had the best that all the others had…it’s not a fixer-upper arrangement, it’s a quantum leap arrangement,” he said.

Dr Rowley said the idea for the project flexible and started upward of 700 rooms to as high as 1,000 rooms.

Dr Rowley admitted that government has signed a Memorandum of Understanding with an Italian company regarding a proposed aluminium project.

“We have an MOU with an Italian company which we are trying to lure for an aluminium (project). To make sure we are not wasting each other’s time we have an MOU. It’s not a binding contract."

Dr Rowley said a proposed desalination plant at Cove Industrial Estate, Tobago, is still in the works, even though Sandals has withdrawn from the island.

“Southwest Tobago has a water problem. It requires augmenting because every dry season there isn’t enough water. So we have to put a plant at Cove where we can…provide additional water for Tobago. The Sandals thing…doesn’t affect that at all.”

“We have to have a proper supply of water. That is a must for Tobago,” he said.

Dr Rowley defended the decision to abstain from voting at a recent session of the Organisation of American States (OAS), which voted to reject the presidency of Venezuelan President Nicolas Maduro.

“We had three choices: to vote for, to abstain or to vote against. We chose to vote for the people of Trinidad and Tobago. Trinidad and Tobago has very good relations with Venezuela, notwithstanding what is happening in Venezuela. One does not cancel out the other. We are not to be encouraged to be otherwise than a good neighbour, it is not an either-or situation,” he said.

Dr Rowley again responded to questions on negotiations regarding national gas contracts, saying that in the history of the country’s dealings that information has not been made public.

"In this business of marketing gas, the gas price is a trade secret," he said.

Sandals pulls out of Tobago