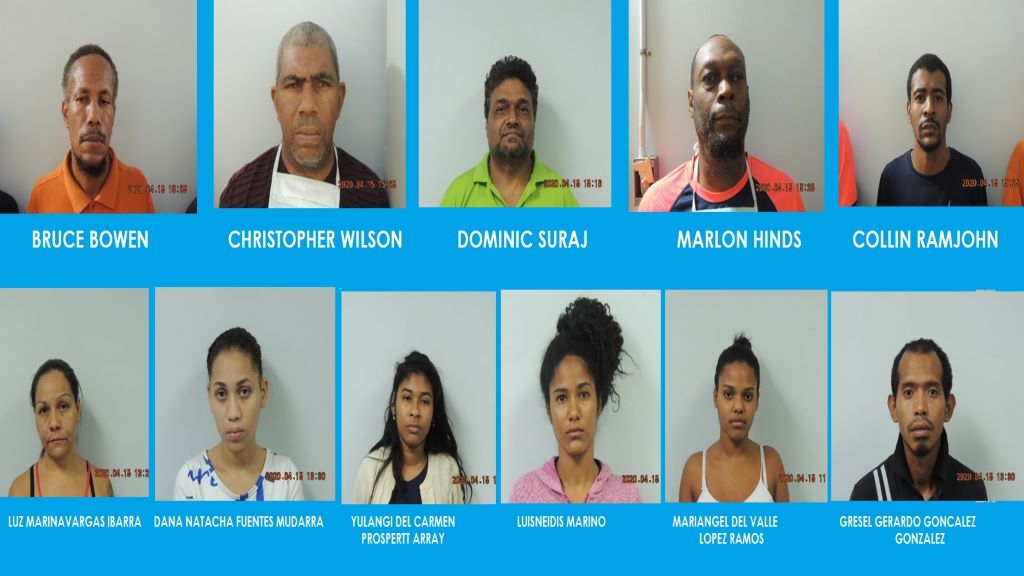 Photos provided by the Trinidad and Tobago Police Service (TTPS).

Five Trinidadian men were also among the group, which was detained at a COVID-19 party last Friday, hours after Police Commissioner Gary Griffith put the country on notice that police officers would shut down any such gatherings.

Trinidadian nationals, Bruce Bowen and Dominic Suraj, both of Maraval, Christopher Wilson from Belmont, Collin Ramjohn from Point Cumana, and Marlon Hinds from Diego Martin, were among 16 people held during an operation conducted by members of the Special Operations Response Team (SORT) at Alicia’s Guest House, Cascade that day.

The operation was led by Commissioner Griffith.

Charges were laid against the 11 for the offence of gathering in a public place where the number of persons gathered exceeded five persons, in accordance with Regulation 3 (1) (b) of the Public Health [2019 Novel Coronavirus (2019-nCoV)] (No. 9) Regulations, 2020.

They partygoers appeared before Port of Spain Magistrate Adia Mohammed via video conferencing on Wednesday.

The non-nationals were denied bail and remanded into custody.

The Trinidadian men, however, were granted own bail each in the sum of $20,000 on the condition that they remain at their residences between 6 pm and 8 am, until the COVID-19 Regulations are lifted.