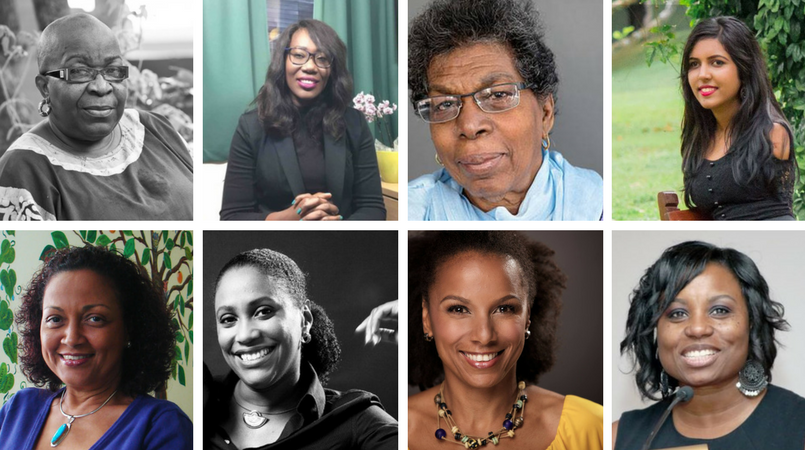 By now many have heard of Dr Alleyne, an aerospace engineer who hails from Trinidad and Tobago.

Dr Alleyne was the first woman of Caribbean descent to hold a senior management position at the National Aeronautics and Space Administration (NASA).

The recipient of several recognition awards from NASA, she played a lead role in the design and development of space vehicles, among them the state-of-the-art Orion crew exploration vehicle.

She also received commendations from the US Department of Defense for her work on its ballistic missile defence system.

In 2007 Camille created non-profit organization, the Brightest Stars Foundation, and is dedicated to helping young women and girls in STEM.

She also recently launched her ‘10,000 Girls Empowerment Tour’ starting in Trinidad and Tobago.

Hazel Brown has a long history of advocacy and activism for women’s rights, and is the Executive Director of Network of NGOs for the Advancement of Women.

Brown has spoken out continuously for women’s rights and against discrimination in general.

She was listed in the UN Women’s 2016 Commission on the Status of Women, saying:

“I got married in 1962 and was told that married women who had jobs were required to give their earnings to their husbands. In 1962, the income tax law in Trinidad and Tobago considered an employed married woman in the same category of persons as children, imbeciles and people with insane mind. Eventually, we successfully advocated to change that law. But there remain other discriminatory laws that need to be amended. For example, domestic workers are not legally considered as workers and denied the benefits and the rights of all other workers, by law.”

She has numerous NGOs as an independent consultant and has done considerable work in the areas of child protection, human rights, social policy development, poverty alleviation, adoption and family services, gender and development, crime and violence in the society, HIV- AIDS, and prison reform.

St Rose Greaves is one of many actively pushing for the end of child marriage within Trinidad and Tobago.

Attorney-at-law, Veera Bhajan, was first highlighted in the media after excelling at her Common Entrance exam, passing for her first choice (St Augustine Girls’ High School (SAGHS)) and placing in the top 100 students in T&T.

No small feat for someone born with no arms, but Bhajan makes it look easy and puts the rest of us to shame.

Debra Lewis, head of the Mama Toto Resource and Birth Centre, has raised the profile of midwifery in Trinidad and Tobago and the Caribbean.

She received a Chaconia Medal (Gold) for the Development of Women of the Order of the Trinity on Independence Day 2014.

In 2012 Lewis was appointed the Vice President of Global Operations for The International Confederation of Midwives, (ICM).

This former nun and philanthropist has been able to create a loving home for society’s unprivileged children, ,with limited funding.

Dr James is attending the University of Southampton, studying a Master’s degree in Leadership and Management in Health and Social Care.

In 2016, she was chosen as one of ten World Contraception Day Ambassadors (WCDA), from around the world, as part of the WCDA Project, which was launched on October 15.

Dr Baccus-Taylor is a Food Technologist with and a LASPAU-Fulbright scholar.

She is well known for her expertise and experience in food safety, food quality assurance and food product development, and is a recognised local and international food technology consultant.

She is the Acting Head of the Department of Chemical Engineering, Programme Coordinator of the Food Science and Technology Unit (FSTU), and Senior Lecturer and Researcher at the FSTU, The University of the West Indies (UWI), St Augustine.

Dr Baccus-Taylor was part of a team that conducted microbiological and molecular epidemiological research on Salmonella enteritidis in the Caribbean, focusing on Trinidad and Tobago, Barbados and Jamaica. This pioneering study contributed significantly to the pool of information on this food-borne bacterial pathogen.

Williams, originally from Trinidad and Tobago, studied law at Oxford University and went on to become Facebook’s Director of Global Diversity.

The former Rhodes scholar has practised human rights law and now focuses on equal rights and inclusivity at Facebook.

She is also hosting an open session in Trinidad and Tobago on social media diversity in April 2017.

Former parliamentarian Dr Eastlyn McKenzie was born in Tobago and served as an educator for many years.

She served as an Independent Senator during the 5th, 6th, 7th and 8th Republican Parliaments.

Dr McKenzie participated on a number of Parliamentary Committees including the Special Select Committee of the Senate which examined the adequacy of the Parliament buildings.

In 2008 Dr McKenzie was awarded the Chaconia Medal Silver. She passed away in 2015, however the effects of her leadership live on.

Cynthia Alfred served as the Secretary for Community Development and Culture and Health Secretary at the Tobago House of Assembly (THA).

She was the first woman to be Deputy Chief Secretary of the Tobago House of Assembly, and the first Tobagonian to be Vice President of the Senate of Trinidad and Tobago.

Dr Christine Carrington is a molecular virologist and university lecturer.

Dr Carrington obtained a BSc in Biotechnology at King’s College at the University of London and also attended the Institute of Cancer Research, obtaining a PhD in Molecular Virology

She was awarded a Commonwealth Research Fellowship from the University of Oxford in 2004 and 2005.

Dr Carrington is a senior lecturer in the Department of Pre-Clinical Science, Faculty of Medical Sciences, The University of the West Indies (UWI), St Augustine, Trinidad.

Please note this list is by no means complete, there are so many more women helping to transform our country.  If you know of others please comment below or email looptt@trend.media.

Brought to you by Carefree http://bit.ly/_CareFree