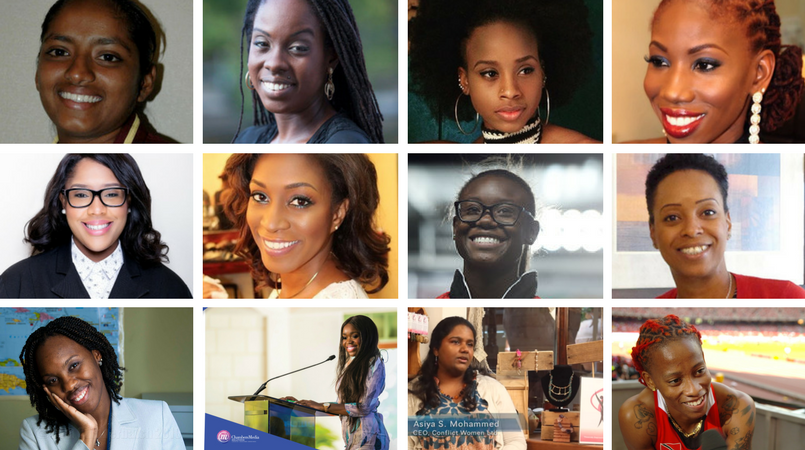 Previously, LoopTT looked at 10 women who helped shape Trinidad and Tobago; this year, we look at young women who are charging forward to take on the mantle of leadership passed on by previous generations.

Teocah Dove has become a familiar name, setting an example of success and leadership after receiving the Queen’s Young Leader Award in 2015.

She is a Chevening Scholar with over 10 years of volunteerism, advocacy and activism experience. She is also one of the first female recipients to have received this award.

Dove has a passion for equality rights and the protection of vulnerable persons in society and holds degrees in Journalism and Public Relations, Media and Communications, and Gender and International Relations.

She has a well-known history of designing, providing technical direction on, and implementing impactful social interventions, empowerment, inclusion and leadership programs, aimed at improving the lives of vulnerable women, children and youth.

Writer, cultural theorist and lecturer at the Department of Creative and Festival Arts, UWI St. Augustine, Dr Marsha Pearce focuses on Caribbean culture and its various expressions within society.

Her research interests lie in the fields of contemporary art, mass media, museum studies and practice and conceptualisations of space and place.

She was the 2006 Rhodes Trust Rex Nettleford Cultural Studies Fellow and is Senior Editor and Art Writer for ARC Caribbean Art and Culture Magazine, and has written for numerous local and international publications.

She is also a member of a number of professional networks including the International Association of Art Critics (AICA) – Southern Caribbean Section and the Commonwealth Association of Museums.

Bushell is the youngest national District Governor of the International Association Lions Club, leading Sub-District 60A, which comprises Guyana, Suriname and Trinidad and Tobago.

She is one of two female Lions occupying positions of leadership previously reserved for their male counterparts.

Asiya Mohammed’s company, Conflict Women Ltd, has made ground-breaking strides in empowering victims of domestic violence since its inception in 2014.

Her company works with survivors of domestic and sexual violence, helping them to provide for themselves by creating and trading handmade jewellery.

For more information go to www.facebook.com/conflictwomenltd

Senator Raffoul was was appointed an Independent Senator on September 23, 2015 and has been making her voice heard on socio-economic and cultural issues ever since.

A graduate of Oxford University with an MSc in Economics for Development in 2008, Raffoul also attained a BA (Hons) in Applied Economics with a minor in Political Science from Queen's University, Canada in 2006.

The former student of St. Joseph's Convent Port-of-Spain was also the recipient of a National Scholarship in 2002.

Senator Raffoul has continued to call for the protection of the vulnerable in society.

She has been a board member of The University of Trinidad and Tobago since February 2015 and founded MadeIntheCaribbean.co, an e-commerce website for the sale of local products.

Cricketer Anisa Mohammed has, along with the rest of the West Indies women’s team, helped bring glory back to the region.

Since her debut at 15, 19-year-old Mohammed has played in 101 women's One Day International (ODI) and 89 women's Twenty20 international (T20I) matches.

She taken the most the wickets in women's T20Is, with 104, well ahead of everyone who has played in the international format.

Mohammed has also taken a total of seven five-wicket hauls in women's international cricket, five in ODIs and two in T20Is, the only player to achieve either of these feats.

Parkinson has received a $250,000 grant from US DNA-sequencing company, Color Genomics, to continue her research into breast cancer in Trinidad and Tobago.

The company also volunteered its own genetic counsellors to train local physicians.

Her story was featured online on Fast Company.

Parkinson is also hoping to fund studies into other forms of cancer, including prostate cancer.

Olympic sprinter Michelle-Lee Ahye has brought pride to Trinidad and Tobago after competing at the 2016 Olympic games in Brazil.

In the winter of 2014, Ahye traveled to Sopot, Poland representing Trinidad & Tobago at the IAAF World Indoor T&F Championships in the women's 60m dash.

In the finals, Ahye set a new National Record for 60 meters by running 7.10 seconds and placing 6th overall.

Ahye placed 1st in the 100m event at the Lausanne Diamond League meet on July 3, 2014 running 10.98 and Ahye placed 2nd at the Continental Cup in Marrakech Morocco for the Americas Team in 2014.

Another Olympic sprinter, St Fort has also done well in her field.

Abeo Jackson is a producer, actor and dancer, and a second-generation member of the Les Enfants Dance Company (her mother was one of the founding members of the group). She was taught by the 'grand dame of dance' in San Fernando, Joyce Kirton.

The theatre expert worked with Raymond Choo Kong before creating her own production company, Abeo Jackson Productions, in 2012.

Jackson also performed alongside rapso stars 3canal in 2016 for their annual show.

Job is a writer with a wealth of local and international experience and lectures Masters students on Sport Communication and Public Relations at the University of Trinidad and Tobago.

She provides issues management counsel to the former Port of Spain mayor Raymond Tim-Kee, and works with local sporting organisations such as the Trinidad and Tobago Olympic Committee and the TT Pro League.

Job is a graduate of Syracuse University’s Newhouse School of Public Communications. With a BA in Public Relations and Post Graduate Diplomas in Sports Management and Protocol Studies from FIFA/CIES and the International School of Protocol and Diplomacy.

Gillian Wall is co-Founder of local NGO, Powerful Ladies of Trinidad and Tobago (PLOTT), a group that has been making a name for itself in bringing women’s issues to the fore.

In 2015 PLOTT received a National Award (Gold) for its “Outstanding Contribution to the development of Women’s Rights and Issues.”

Wall’s strong presence in advocating for the improvement of women’s rights and the end of domestic violence through PLOTT has continued to made a difference within Trinidad and Tobago.

For more information go to www.plottonline.org

You may not see her name up in lights, but be assured that the people you do see might be because of her skilful expertise.

Pierre is the Managing Director and owner of PearTree Consulting, a full-service Public Relations and Event Management consultancy with a speciality in Protocol and Diplomatic requirements.

The company has handled several events including the recent launch of the Victoria Keyes Development and helped coordinate SoCalypso – Calypso Rose in Concert in February.

She has a Bachelor of Arts in Communications and Spanish from York University in Toronto and an Executive diploma in Protocol and Soft Diplomacy from the ISPD in Brussels.

Pierre also works with Trinidad and Tobago's most decorated athletes to “take brand T&T across the world”.

A force to be reckoned with within the field of public relations, Tenille Clarke has worked with many influential brands such International Soca Monarch King Aaron “Voice” St. Louis, Roy Cape All Stars, Brian Mac Farlane and Olympian Cleopatra Borel, among others.

Williams has fought long and hard to represent Trinidad and Tobago.

The elite gymnast was the subject of controversy in 2016 after fellow gymnast Marisa Dick replaced her in representing the country at the 2016 Olympic games in Brazil, which was reportedly due to an injury Williams had obtained.

Williams became the first gymnast to represent Trinidad and Tobago at world championship when she competed at the 2011 World Championships in Tokyo, Japan.

She placed 59th at the 2015 Glasgow World Championships.

Who else do you think are young, powerful women making contributions to Trinidad and Tobago? Comment below!