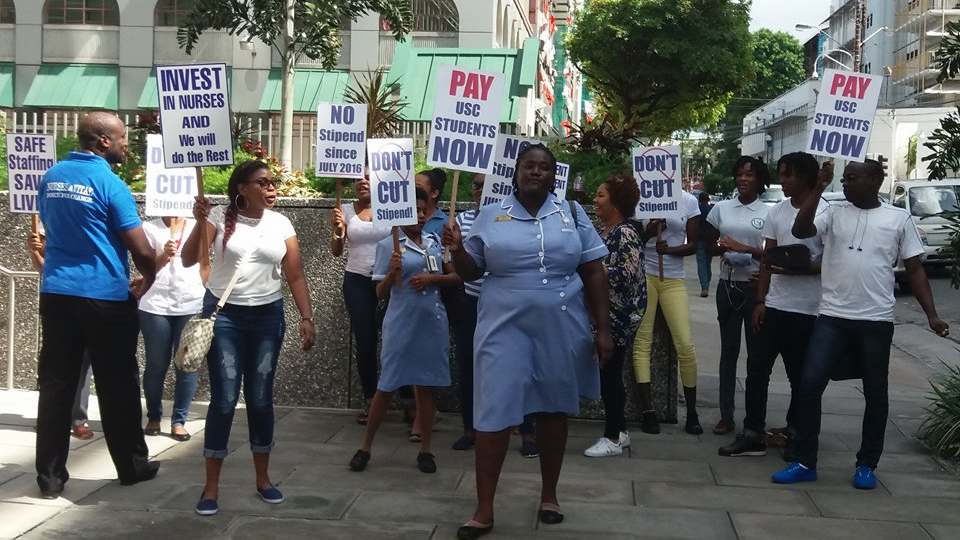 A total of $1.5 million is owed to student nurses with the College of Science, Technology and the Applied Arts of Trinidad and Tobago (COSTAATT), while a disputed sum is outstanding for those at the University of the Southern Caribbean (USC).

The Education Ministry, however, is in the process of determining whether it is liable to pay the undisclosed, outstanding sum to the USC.

Student nurses have been protesting outstanding stipends with USC nursing students having not received stipends since July 2016.

At a protest last Tuesday, President of the Registered Nursing Association (TTRNA) Idi Stuart said the student nurses depend on their $800 a month stipend for travelling and studying expenses.

According to Stuart, some 500 students are affected.

Education Minister Anthony Garcia told the Parliament on Friday there was some concern regarding the sum owed to the USC.

“The information that is before us would tell us that COSTAATT is owed $1.5 million, the School of Nursing and Midwifery is owed nil but there is some concern with respect to the money that is owed to the University of the Southern Caribbean.”

Garcia could not provide an exact figure on the number of students affected.

Asked what would take place with the students while the Ministry conducts its investigation, the Minister said while officials are sympathetic, the proper course of action must be taken.

“We are sympathetic to the plight of the students of the University of the Southern Caribbean, however, we have to ensure that what we do is in keeping with the way we spend Government’s money.

This is a private institution and before we can disburse funds, we must ensure that we do the proper thing,” Garcia said.