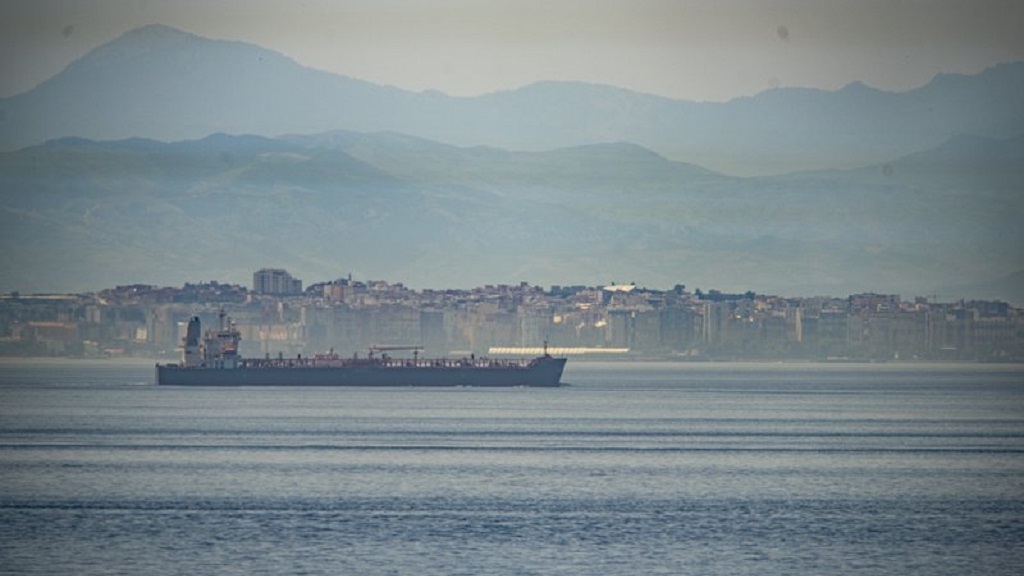 A view of the vessel the Clavel sailing on international waters crossing the Gibraltar stretch on Wednesday, May 20, 2020. Five Iranian tankers likely carrying at least $45.5 million worth of gasoline and similar products are now sailing to Venezuela, part of a wider deal between the two U.S.-sanctioned nations amid heightened tensions between Tehran and Washington. (AP Photo/Marcos Moreno)

The oil tanker Fortune encountered no immediate signs of US interference as it eased through Caribbean waters toward the Venezuelan coast and Venezuelan officials celebrated the arrival.

"Iran and Venezuela have always supported each other in times of difficulty," Venezuelan Foreign Minister Jorge Arreaza tweeted. "Today, the first ship with gasoline arrives for our people."

The tanker and four behind it were finishing a high seas journey amid a burgeoning relationship between Iran and Venezuela, both of which Washington says are ruled by repressive regimes.

He said the Clavel, the last of the five ships, was about 3 1/2 days behind the lead tanker.

Venezuela sits atop the world's largest oil reserves, but it must import gasoline because production has crashed in the last two decades.

Critics blame corruption and mismanagement by the socialist administration amid an economic crisis that has led to huge migration by Venezuelans seeking to escape poverty, shortages of basic goods and crime.

The Iranian tankers hold what analysts estimate to be enough gasoline to supply Venezuela for two to three weeks.

Deep gasoline shortages have plagued Venezuela for years, though the problem had until recently largely spared the capital of Caracas, the largest population centre and political seat.

Drivers must wait for days in lines that snake through neighbourhoods to fill up with government-subsidized gasoline that costs less than a penny for a tank.

Wealthier drivers with US dollars turn to the black market, where gas costs up to $12 a gallon.

That's a small fortune in Venezuela, where the monthly minimum wage equals less than $5.

The US accuses Iran and other nations of propping up Venezuelan President Nicolás Maduro.

It's among nearly 60 nations that back opposition leader Juan Guaidó as Venezuela's legitimate president, contending that Maduro illegitimately won a 2018 election that banned his most popular opponents.

In a new relationship between Caracas and Tehran, Iran recently also flew shipments of a key chemical needed to help jumpstart a Venezuelan oil refinery and produce gasoline.

Iranian President Hassan Rouhani warned Saturday that the United States should not to interfere with the shipment of oil bound for Venezuela.

In a statement, Rouhani said that the US had created "unacceptable conditions" in different parts of the world, but that Iran would "by no means" be the one to initiate conflict.

"If our tankers in the Caribbean or anywhere in the world face any problems caused by the Americans, they will face problems as well," he added. "We hope the Americans will not make a mistake."

US officials had announced no plans to try to intercept Iran's tankers. However, the Trump administration has increased pressure on Maduro, recently offered a $15 million bounty for his arrest after a US court indicted him as a narcotrafficker.

The US also recently deployed a force of ships, including Navy destroyers and other combat ships, to patrol the Caribbean on what US officials call a drug interdiction mission. The Maduro government considers it a direct threat.

Maduro holds on to power with support from Venezuela's military and his international allies, also including Cuba, Russia, and China. The US says these nations are engaged in "malign activities and meddling" around the world.

"We will not abide by their support of the illegitimate and tyrannical regime of Nicolás Maduro," the Trump administration said in a statement, citing its "maximum pressure" campaign against the socialist leader. "Will continue until Maduro's hold on Venezuela is over."

A defiant Maduro appeared on state TV days ahead of the ships' arrivals, vowing a tough response to any US aggression against the Iranian tankers. He showed images of soldiers firing antiaircraft missiles streaking across the Caribbean.

"They want to enslave us," Maduro said Thursday. "If you want peace, you must be prepared to defend it."

Maduro's defence minister, Vladimir Padrino López, said Venezuela's armed forces would welcome the five Iranian tankers, escorting them with ships and planes through the nation's maritime territory and into port.

Eric Farnsworth, vice president of the Council of the Americas and Americas Society research centre, said he didn't expect the US would act against the Iranian tankers.

Such an act could too easily escalate, he said, especially in the Persian Gulf where Iran could retaliate against US ships.

"(That) would needlessly undermine the narrative that Venezuela, with the world's largest proven oil supply, has to import gasoline from Iran of all places because they have become such an international pariah," Farnsworth said. "If they don't, Caracas claims a great victory for the fatherland and tries to portray the US as impotent."

5 Iran tankers sailing to Venezuela amid US pressure tactics

Oil tankers ‘go dark’ off Venezuela to evade US sanctions