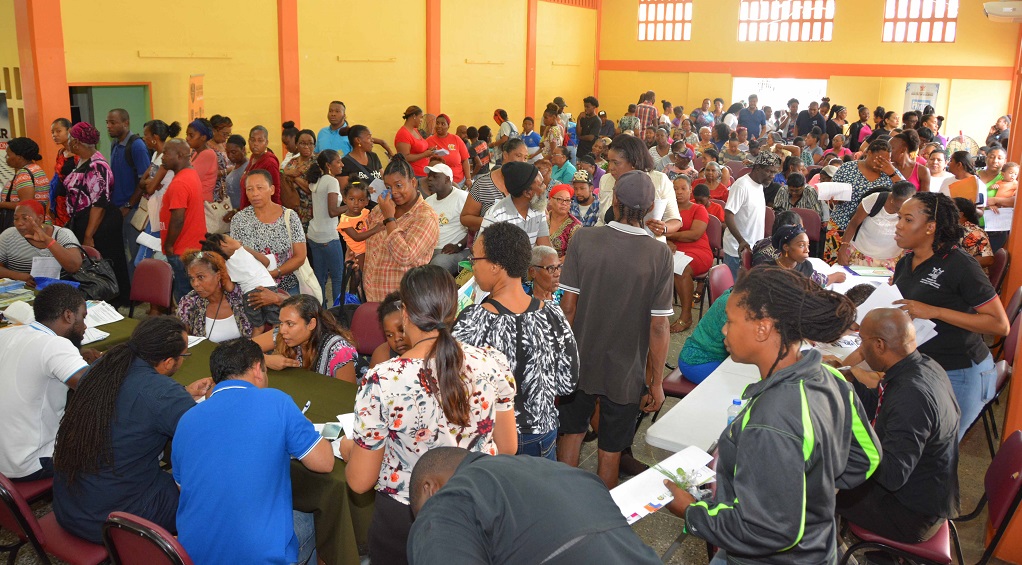 More than 300 residents of Pinto Road, Arima and nearby environs received information about the grants and services offered by the Ministry of Social Development and Family Services on Wednesday. This as the Ministry re-launched its Community Outreach and Impact Caravan at the Pinto Community Centre.

Minister of Social Development and Family Services Camille Robinson Regis told residents that the caravan was aimed at bringing services closer to those who were unable to commute to government offices.

The Minister noted that the caravan, part of the implementation process of the National Social Mitigation Plan, began in May 2019 under the former Minister of Social Development and Family Services, Cherrie-Ann Crichlow-Cockburn.

Phase one of the caravan saw the Ministry's executive and staff meet with various stakeholders inclusive of the representatives of village councils, local entrepreneurs, councillors, aldermen, residents, training institutions and the social welfare staff of each community. Minister Robinson-Regis stated that this was done to: "ensure that the Ministry's efforts to build resilience and sustainability in each community were directly linked to the needs and interests of citizens and also, in keeping with its socio-economic potential for overall productivity and wealth generation in Trinidad and Tobago."

The Permanent Secretary in the Ministry Jacinta Bailey-Sobers also addressed attendees, reassuring them that the executive was working on a number of improvements to delivery and customer service.

In January 2020, the Minister made a public announcement that she had taken a decision to provide temporary food cards to prospective holders in an effort to get direct help to those in genuine need. To this end, approximately 500 new households will benefit on a monthly basis.

The Ministry's caravan is expected to roll into Maloney Regional Complex on Friday and St Augustine South Regional Complex on Monday. Citizens are reminded to bring one valid form of Trinidad and Tobago identification in order to register at the caravan.

Also in attendance at the event were representatives of Ministries and state agencies including the Ministry of Public Utilities, Trinidad and Tobago Electricity Commission, Water and Sewerage Authority, Children's Authority of Trinidad and Tobago, National Training Agency, National Commission for Self-Help Limited. They also received blood sugar, cholesterol and blood pressure testing from the North Central Regional Health Authority.