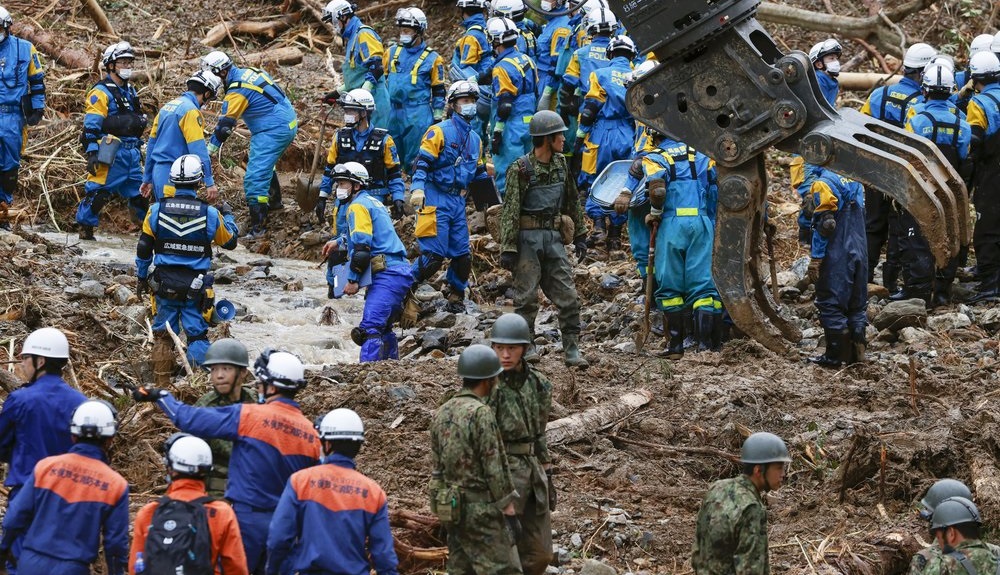 The death toll from three days of heavy rain and flooding in southern Japan rose to 40 on Monday, including 14 who drowned at a riverside nursing home, as rescuers searched for 10 missing people and rain threatened wider areas of the main island of Kyushu, officials said.

Army troops and other rescuers worked their way through mud and debris along the flooded Kuma River, where many houses and buildings were submerged nearly to their roofs.

The Meteorological Agency issued the highest weather warning for three prefectures in northern Kyushu after heavy rain hit the island's southern region over the weekend.

More than half a million people were advised to evacuate across Kyushu, including riverside towns in Kumamoto city where 40 bodies were recovered.

The evacuation was not mandatory and many people are believed to have opted to stay at home because of concerns over catching the coronavirus, even though officials said shelters were adequately equipped with partitions and other safety measures.

The dead included 14 of the 65 elderly residents of the nursing home next to the Kuma River, which is known as the "raging river" because it is joined by another river just upstream and is prone to flooding.

The river rose abruptly and its embankment gave in, causing floodwaters to gush into the nursing home, where most of the residents were bedridden or wheelchair users.

A caregiver on night duty told the Asahi newspaper that he saw the river rising in the early hours of Saturday and he and three colleagues woke everyone up and to prepare them for evacuation. But then he heard a window break and saw water pouring in and quickly rising to his knees, he said.

He heard voices calling for help and grabbed two people to lift them above the water, which continued to rise until his arms grew numb and he was no longer able to hold them and they died, he said.

"I'm so sorry. I really wanted to help them, but I couldn't. I had no strength left," the newspaper quoted him as saying.

Shunji Ogawa, a village assemblyman who regularly volunteers at the nursing home, said he joined the caregivers in helping move the residents but the water rose suddenly like a tsunami, the newspaper reported.

Japan floods leave up to 34 dead, many at nursing homes