7 highlights of the Prime Minister's one on one interview 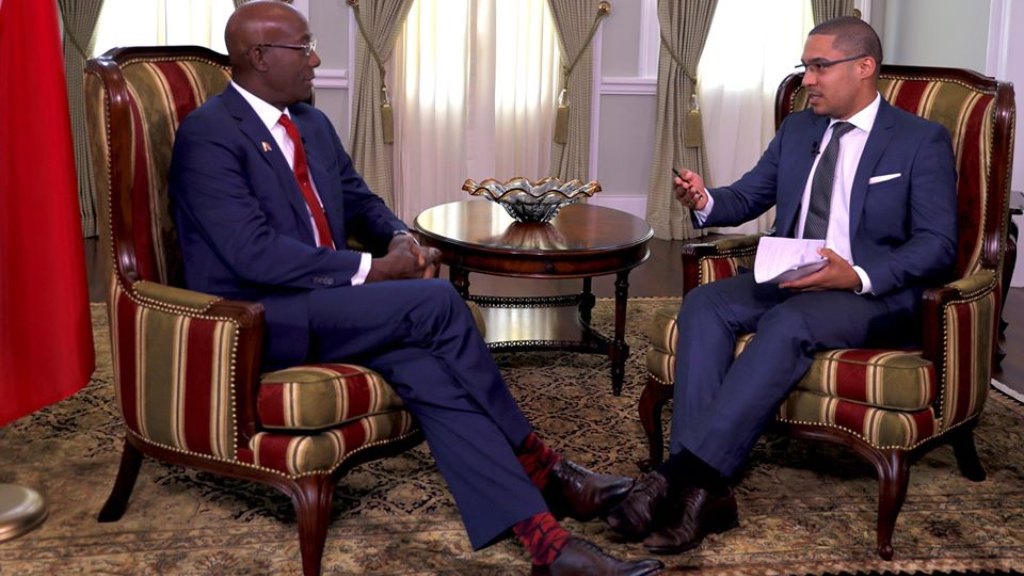 Photo courtesy the Office of the Prime Minister.

Improvements in the crime situation and the current state of the economy are just some of the things citizens can look forward to as Government continues to develop strategies to treat with these issues.

Prime Minister Dr Keith Rowley in a one on one interview with CNC3’s Khamal Georges, who addressed allegations of wrongdoing facing sitting members of Government, gave the assurance that work was being done in a number of key areas affecting society.

The hour and 23-minute-long interview was aired on all major television and radio stations on Sunday evening.

Tv6 did not air the interview, citing commercial obligations.

Here are some key takeaways from the Prime Minister’s wide-ranging interview:

The Prime Minister said while Government has not made the progress it had hoped to in treating with crime, it has not failed to treat the rising scourge.

He defended the performance of National Security Minister, Stuart Young in spite of an increased murder toll. Rowley said he was satisfied Young is making the effort required, adding that he would not make any ministerial change in response to rising crime.

The Prime Minister also expressed his satisfaction with Police Commissioner Gary Griffith at the helm of the Police Service.

Asked whether he had any message for women in light of recent instances of domestic violence which ended in murders, the Prime Minister chose to speak directly to men. He appealed to the nation’s men to treat women with the same love and respect that they would have for their mothers and sisters and other female relatives.

He urged those in relationships where children are involved to think of the young ones and wish their partner well and move on. Rowley said it was never acceptable to resort to violence against women.

The Prime Minister promised in a matter of weeks that there would be a noticeable change in the pace within which justice is delivered.

He attributed the impending improvement in the administration of justice to the Parliament’s move to the Red House, which will see the vacated space at the Waterfront Complex put to use by civil courts.

He noted that the decriminalisation of marijuana and the removal of traffic-related matters from the criminal courts would also assist in that regard.

Government is due to make a decision on Patriotic Energies and Technologies bid for the Pointe-a-Pierre refinery. Negotiations for the acquisition are still ongoing.

The Prime Minister said a decision was expected "soon" as both parties are in the final stages of negotiations.

He said while Patriotic was selected as the preferred bidder, the company is expected to come back to a Cabinet-appointed committee with evidence it can meet its commitments.

Rowley said negotiations are at the stage where Government would be in a position to accept and commit or "reject and move on" in the coming weeks.

5. Devaluation of TT dollar not an option

6. Stay away from smoking marijuana

The Prime Minister admitted that he had never smoked marijuana, and warned young people to do the same.

He stressed that while it made good sense for possession of small amounts to no longer be a criminal offence, it was still a dangerous drug.

Rowley cautioned young people against smoking marijuana as he said he has seen firsthand the effects of addiction.

The Prime Minister said the process of the demonetisation of the old cotton-based $100 has gone remarkably well.

Asked about the timeframe within which citizens had to change the bills, Rowley said no time would have been the right time.

He said while the exercise may have been inconvenient to some, it was worth it and completely necessary.