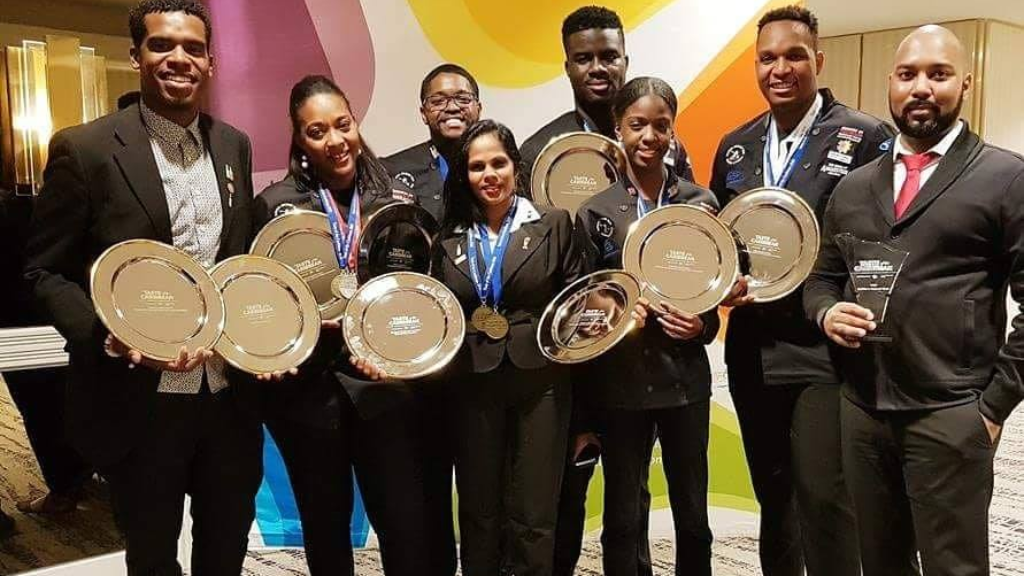 For the seventh time, Trinidad and Tobago has copped the title of Caribbean National Culinary Team at Taste of the Caribbean.

The members of the T&T National Culinary Team 2018 were an immediate hit at the CHTA’s ‘Caribbean305’ event held on June 23 at Jungle Island. Their mouth-watering offerings of geera pork, curried chicken, eggplant and tomato pholourie (with a range of sauces), and a sorrel swizzle rum cocktail were all in high demand by patrons from both the Caribbean and Southern Florida, and their booth was cleared out within the first hour.

For the Team of the Year competition dinner held on June 24, the National Culinary Team presented a scrumptious, well-executed three-course dinner offering that creatively infused many of Trinidad & Tobago’s local flavours and spices, much to the delight and appreciation of the judges and dinners alike. Trinidad & Tobago won a Gold medal for this dinner offering.

Team members also participated in several Individual competitions where they amassed six additional medals including one Gold, one Silver, and 4 Bronze.

"The THRTA recognizes the pivotal role that its hospitality training institute, the Trinidad & Tobago Hospitality & Tourism Institute (TTHTI) continues to play in achieving these successes, given that five of the six members of the 2018 T&T National Culinary Team are either past or present students of the TTHTI. The THRTA and the TTHTI remain committed to the development of Trinidad & Tobago’s youth by providing them with a regional platform and relevant training to expand their culinary and bartending skills," according to a media release by THRTA on Wednesday.

"The THRTA sees this continued culinary excellence as a compelling value proposition for Destination T&T to attract international tourists to share in our cuisine, culture and local experiences. Additionally, the continued, demonstrated success on the international stage creates opportunities for the development of our young citizens and the establishment of defined career pathways within the local hospitality and tourism sector."