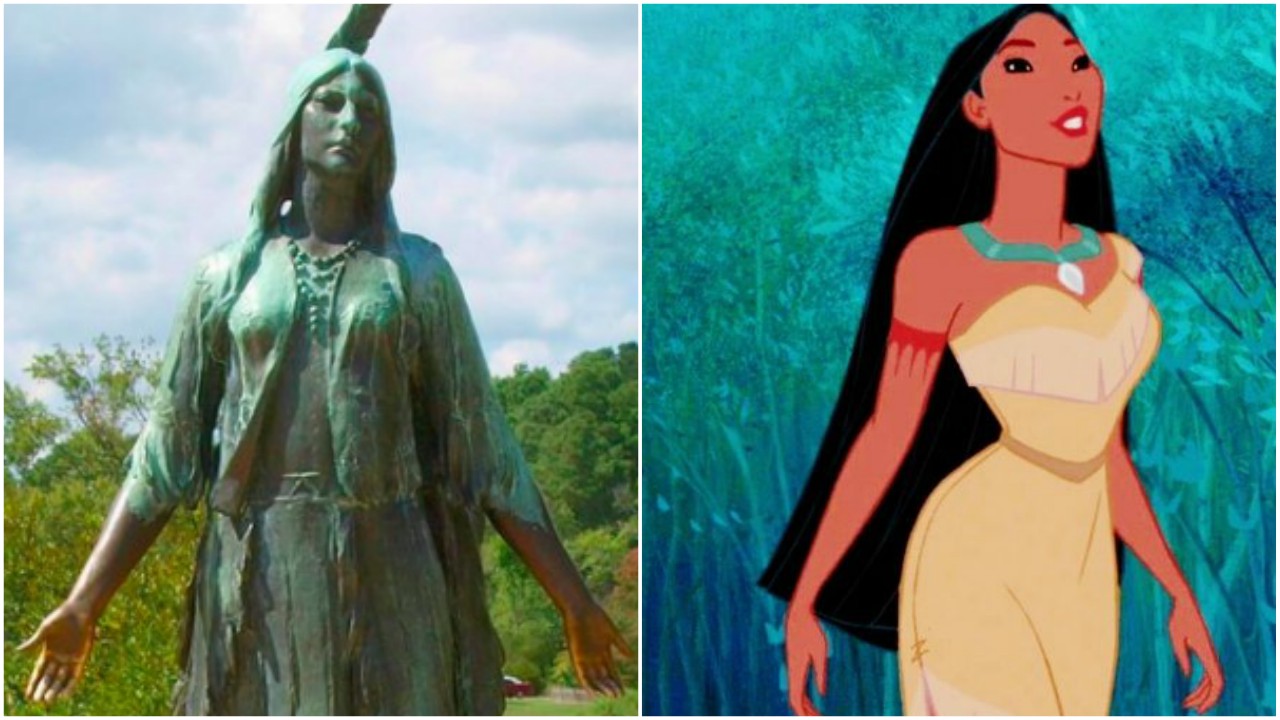 (L-R) Statue of Rebecca Rolfe (aka Pocahontas) in Jamestown, Virginia. Credit to http://flickriver.com, next to Disney's Pocahontas

There is more to 'Pocahontas' that the 1995 Disney movie and it's straight to video sequel Pocahontas II.

Recently, President Donald Trump made a 'Pocahontas' comment and it rubbed many people the wrong way. He was at a White House event honoring Navajo Code Talkers to take a political jab at a Democratic senator he has nicknamed “Pocahontas.”

Related article :Trump gets blowback for his ‘Pocahontas’ jab at Navajo event

The Republican president last week turned to a nickname he often deployed for Massachusetts Sen. Elizabeth Warren during the 2016 presidential campaign to mock her claims about being part Native American. He told the three Navajo Code Talkers on stage that he had affection for them that he doesn’t have for her.

Some say that he should know better and they do not excuse his comment, others found it distateful and uncalled for, while some gave him the benefit of the doubt.

For those readers who only know the 'Colours of the Wind', sassy talking tree Grandma Willow and technicolour version of 'Pocahontas' here are some facts to educate you, so you don't ignorantly fall into a Trump trap yourself.

Disney got some of Pocahontas' story right, but it got a lot wrong. A lot is also not known about Pocahontas — she lived over 400 years ago — and there are many different accounts. But according to the written history of her life on the website for Historic Jamestowne, which is part of Colonial National Historical Park, Disney definitely didn't stick to history's script.

According to the Historic Jamestowne website, Pocahontas's name was Amonute, although she also had the more private name of Matoaka. The name Pocahontas was a nickname meaning "playful one" and Disney did stay true to her playful nature. She was also her father's favorite child and though Disney doesn't show her having any siblings, she is clearly loved by her father in the film. Other than some basic facts though, the movie then diverges from history.

Pocahontas is said to have been around 10 or 11-years-old when she met Captain John Smith in 1607, according to Encyclopedia Britannica. The Historic Jamestowne website wrote that Smith was 27-years-old at the time (the real Smith was sans dreamy blonde hair and piercing blue eyes) and the Disney film bumped Pocahontas's age up significantly to go the romance route with the two historical figures. The film did get it right that her father was Chief Powhatan (whose real name was Wahunsenacawh) and that her birth mother was no longer around — historians can't prove if her mother had actually died or not though.

In the film, John Smith and Pocahontas meet almost instantly after he lands in America — with the exception of a quick musical interlude with the song "Mine, Mine, Mine." (History does not indicate any spontaneous singing.) In truth, Pocahontas and her father didn't meet any British people for a few months, according to the Historic Jamestowne site. Smith and the British landed in the spring and she didn't encounter Smith until he was captured in the winter by Powhatan's brother Opechancanough. The film was correct in portraying Smith as a well-traveled explorer and soldier and the Colonial Williamsburg Journal confirmed that he traveled to Virginia around 1606/1607 and did work with a man named John Ratcliffe. And Encyclopedia Virginia wrote that Smith came to America from England with the Virginia Company of London, so the details of the opening song "The Virginia Company" weren't far off from the truth.

Because of the aforementioned age difference, there was no real romantic relationship between Smith and Pocahontas. They were close for a couple of years though since Pocahontas acted as a liaison between the British and the Powhatan Chiefdom. A fact that continued to come up when I was researching their history (particularly on the Historic Jamestowne website) was that young Powhatan Indian children wore little or no clothing (with maybe an animal pelt in the winter). This is an indication that she would have most likely been naked when she met John Smith. For me, this reinforces the idea that Smith probably did consider Pocahontas just to be a child in this new land he had traveled to. So no make-out sessions between the pair went down around Grandmother Willow. Shockingly, history has no record of a talking willow tree — or spunky raccoons and hummingbirds — either.

In the film, Chief Powhatan wants Pocahontas to marry the stoic Powhatan warrior Kocoum, even though Pocahontas is resistant. Kocoum was a real person who existed, but he wasn't killed by the bumbling British man-boy Thomas like the film shows. The Historic Jamestowne site said that Pocahontas married Kocoum in 1610 ("Should I marry Kocoum?"), a year after Smith left Virginia. Not much is known about Kocoum — an Englishmen's account called him a "private captain," but he could have been a member of the Patawomeck tribe or a bodyguard to Powhatan. (The latter is what the Disney movie kind of went with.) Pocahontas may have agreed to marry him out of love since she would have had the choice to pick who she would marry and he wasn't a high ranking person in the tribe. After her marriage, the National Women's History Museum wrote that Pocahontas was held captive by Captain Samuel Argall in 1613 as ransom since relationships with the Powhatans and British had deteriorated. At that time, the Historic Jamestowne site said that Kocoum was either killed by Argall, or he just assumed he was divorced from Pocahontas (which wouldn't have been an odd event based on their culture) when it was revealed she'd be marrying the British man John Rolfe.

The National Women's History Museum wrote that Smith left Virginia and returned to England due to a gunpowder wound, but not until 1609 — two years after meeting Pocahontas. In the film, the wounded Smith returns to England after Pocahontas saves him. In real-life, Pocahontas and Powhatan were told he died on his way to England, which was not true. Encyclopedia Virginia wrote that Pocahontas ended up meeting up with Smith when she went to England in 1616. According to Smith's book, The Generall Historie of Virginia, New-England, and the Summer Isles, Pocahontas was emotional upon discovering he wasn't dead and she wanted to call him "father" since her father had welcomed him into their tribe as a son. (Smith wrote that she said, ". . . you called him father being in his land a stranger, and by the same reason so much I doe you.") Yet again, history shows how odd it is that Disney would make Smith and Pocahontas romantically linked.

Trump gets blowback for his ‘Pocahontas’ jab at Navajo event

Disney's wonderful world may be too good to last