8 reasons Trini bees are all the buzz 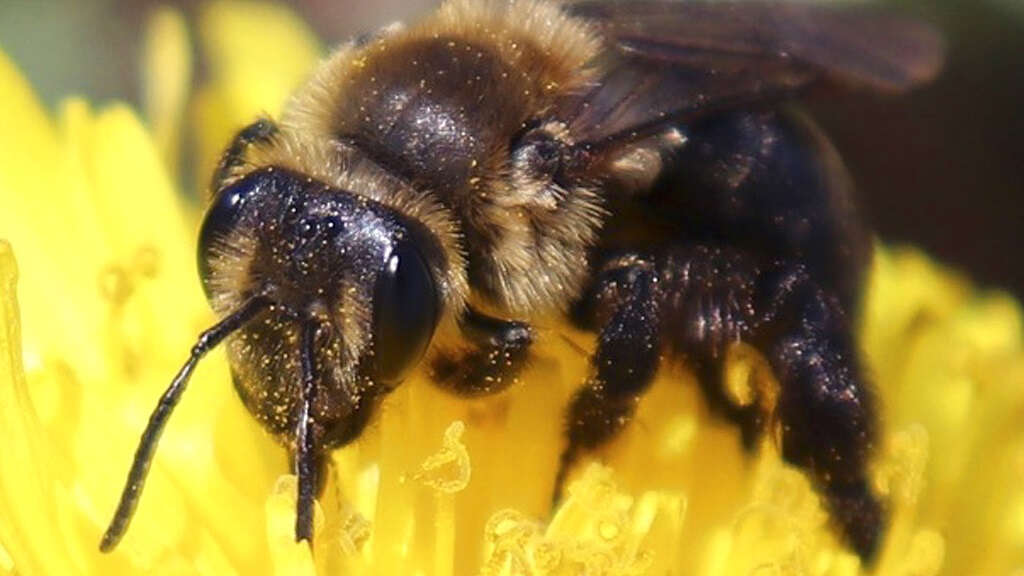 They're small, they're fuzzy, and they're the 'bee's knees' for honey and food production.

But did you know the typical yellow-and-black honey bee isn't originally from Trinidad and Tobago?

Here are eight things to know about bees in Trinidad and Tobago in commemoration of World Bee Day, celebrated on May 20, courtesy pollination ecologist Lena Dempewolf.

1. Some honey bees are 'douglarised' bees

Honey bees used in most commercial hives aren't local but are called 'Africanised' bees. That's because they are a hybrid of European and African honey bees, both of which were imported.

Some beekeepers have jokingly referred to this hybrid as a 'douglarised' bee, in reference to Trinidad and Tobago's diverse ethnic culture.

2. Some native bees don't have hives, or a queen

3. Not all bees can sting you

There are nine species of ‘stingless’ bees that do have hives and a queen and produce honey.

Stingless bees are used to produce honey for commercial and medicinal purposes and are more effective than imported bees at pollinating local plants.

Trinidad and Tobago once won global awards for its honey. However In 2001, the EU enforced the submission of a residue monitoring plan from all third countries (non-EU countries) wishing to export honey into the European Union.

Because of the lack of local testing facilities and costs associated with attaining certification abroad, beekeepers in Trinidad and Tobago have been unable to participate in the NHS and export their honey since 2001.

The wide range of flowering plants is what contributes to the unique taste of Trinidad and Tobago's honey. Destroying local forests would have an effect on the taste of local honey if bees are unable to access the diverse range of plants they did previously.

5. Pesticides have been found in honey

Studies in Europe have shown that low levels of pesticides have been found in honey, however in Trinidad and Tobago, no studies have been done to confirm this in local honey.

However, pesticides are a continuous problem for imported and native bees, which are vulnerable to these toxins and can even be killed by them.

Dempewolf says if bees happen to forage on flowers covered in pesticides, it might make its way into honey, however, it's at low enough levels that it's been proven (so far) to be safe for human consumption.

Many beekeepers are careful to keep their hives away from agricultural fields, however, Africanised honey bees may range quite far in order to find nectar and may go into farmlands where pesticides are used.

Although honey is important, the most important bees aren’t honey bees but native bees.

By contrast, although prized for honey production, Africanised bees are not as effective in pollinating local crops. Therefore the food we enjoy in local markets depends on the survival of our native bees.

During extreme dry seasons such as that experienced in 2019, there's the likelihood of more forest fires.

Africanised bees are more adaptable in that they often move their queen and relocate to a safer spot. Hence the reason one may often see a migrating beehive perched on a branch or other random location.

However native bees are unable to move their hives due to the large size of their queen, and often perish in forest fires.

Dempewolf says solitary bees are slightly more mobile but they lay their eggs in bits of logs and other plants in the forest, which can also be destroyed by forest fires.

Likewise, during the rainy season, heavier showers can also affect bees and by extension food production.

"Bees generally don’t go out during wet weather…it can also wash the nectar out of flowers, so heavy flooding means less pollination," she said.

There's also the problem of loss of habitat due to things such as logging, forest fires, housing developments and unsustainable agriculture, where farmers cut down all vegetation, leaving only one crop.

Dempewolf said there is the element of imported bees crowding out native bees amidst competition for space and nectar - imported bees tend to ‘bully’ local bees out of spaces for hives, however, this comes down to proper management.

Imported bees, however, have been a part of the local ecosystem for quite some time and have learned to coexist with native species, however there remains competition for plants and flowers.

If you spot a bee swarm near you, please don't destroy it. Contact the Bee Keepers' Association or call 470-5436. Alternative, you can call the Zoological Society of Trinidad and Tobago on 622-5344.