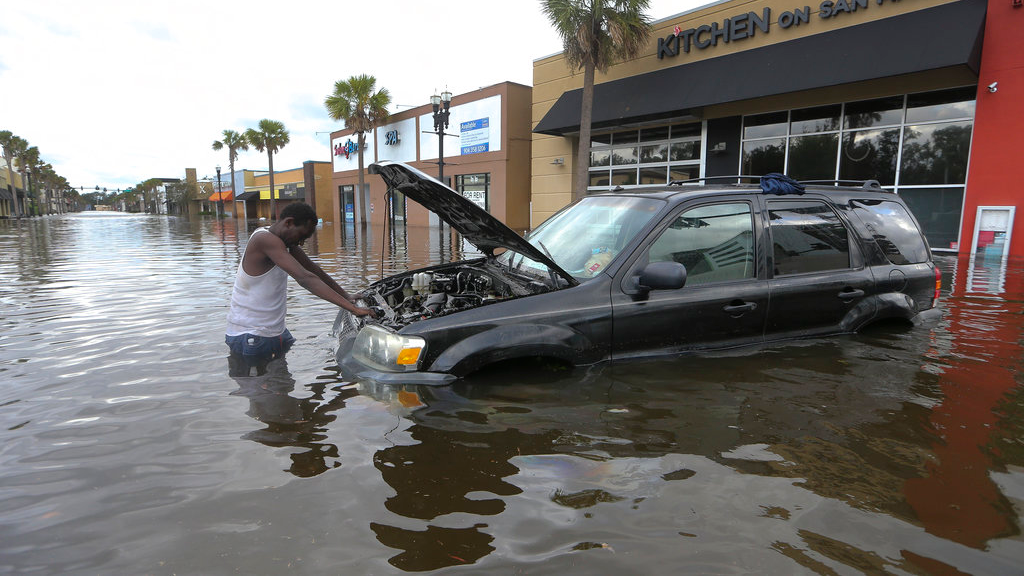 John Duke tries to figure out how to salvage his flooded vehicle in the wake Hurricane Irma, Monday, Sept. 11, 2017, in Jacksonville, Florida

Residents were allowed to return Tuesday to some islands in the hurricane-hit Florida Keys as officials pieced together the scope of Irma's destruction and aid rushed into the drenched and debris-strewn state.

It has been difficult to get detailed information on the condition of island chain where Irma first came ashore over the weekend because communication and access were cut off by the storm's arrival as a Category 4 hurricane. But displaced residents and business owners from Key Largo, Tavernier and Islamorada near the mainland were allowed to return for their first glimpse of the damage Tuesday morning.

People from the Lower Keys faced a longer wait with a roadblock in place where the highway to farther-away islands was washed out by the storm. Road repairs were promised in the coming days.

"It's devastating," he said.

A Navy aircraft carrier was due to anchor off Key West to help in search-and-rescue efforts. Drinking water supplies in the Keys were cut off, fuel was running low and all three hospitals in the island chain were shuttered.

Elsewhere, areas such as Tampa Bay had braced for the worst but emerged with what appeared to be only modest damage. Early Tuesday, the remnants of Irma were blowing through Alabama and Mississippi after drenching Georgia.

Key West resident Laura Keeney waited in a Miami hotel until it was safe to return home, and she was anxious to hear more about her apartment complex. Her building manager told her there was flooding there, but further updates were hard to come by because power and cell phone service have been down on the island.

"They told me there is definitely water in the downstairs apartment, which is me," said Keeney, who works as a concierge at the Hyatt hotel in Key West.

A stunning 13 million Florida residents were without electricity — two-thirds of the state's residents — as sweltering tropical heat returned across the peninsula following the storm. In a parting blow to the state, the storm caused record flooding in the Jacksonville area that forced dozens of rescues on Monday. It also caused flooding and outages in Georgia and South Carolina as it moved inland.

School was canceled in communities around Georgia, and more than 1.2 million customers were without power Tuesday morning in the state.

Six deaths in Florida have been blamed on Irma, along with three in Georgia and one in South Carolina. At least 35 people were killed in the Caribbean.

More than 180,000 people huddled in shelters in Florida, and officials warned it could take weeks for electricity to be restored to everyone.

Around the Tampa-St. Petersburg area, where Irma rolled through early Monday, damage appeared modest. And the governor said damage on the southwest coast, including in Naples and Fort Myers, was not as bad as feared.

Still, Scott predicted that recovery could take a long time in many areas.

"I know for our entire state, especially the Keys, it's going to be a long road," he said.

He said the Navy dispatched the USS Iwo Jima, USS New York and the aircraft carrier Abraham Lincoln to help with relief efforts.

The Keys are linked by 42 bridges that have to be checked for safety before motorists can be allowed in, officials said. The governor said the route also needs to be cleared of debris and sand, but should be usable fairly quickly. County officials placed a road block around Mile Marker 74 just before Sea Oates Beach, but said crews were working to restore U.S. 1 as quickly as possible.

In the Jacksonville area, close to the Georgia line, storm surge brought some of the worst flooding ever seen there, with at least 46 people pulled from swamped homes. The Jacksonville Sheriff's Office warned residents along the St. Johns River to evacuate Monday as floodwaters rose.

Paul Johnson and Shonda Brecheen spent Sunday night in a house they're remodeling in the San Marco neighborhood of Jacksonville after working late on a remodeling project. Jonhson woke up Monday morning, looked out the window and saw boats passing by where cars used to drive in the neighborhood near the river.

The managed to push his truck through standing water to a nearby parking lot to dry out, but he's worried about damage to the swamped vehicle.