Activist protests outside PM's office: No need for Manzanilla Highway 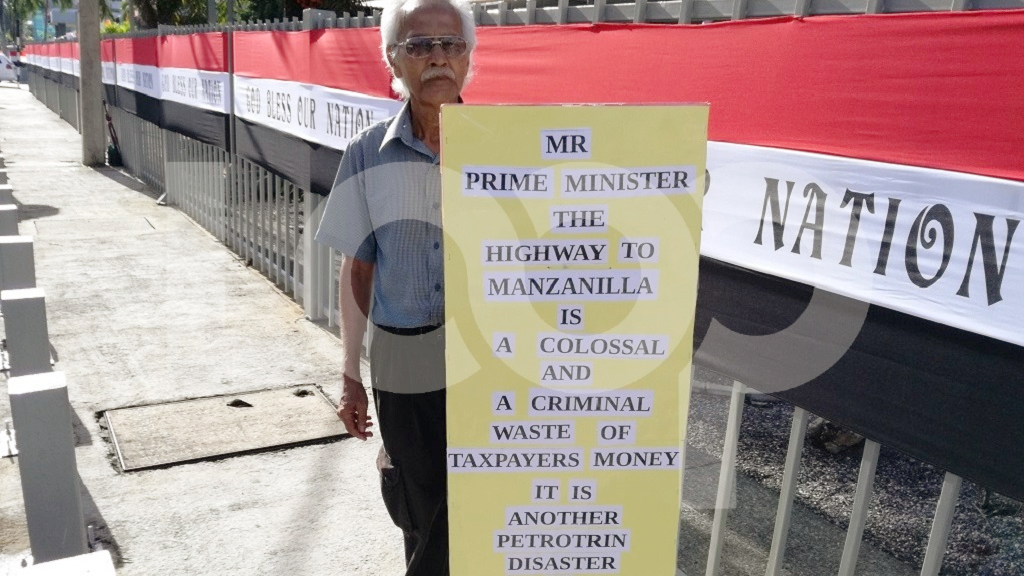 Political activist Ishmael Samad is asking why millions of dollars have been allocated for the proposed Cumuto/Manzanilla Highway when government cannot maintain existing roadways.

Samad, who is known for his activism on political issues, marched in front of the office of Prime Minister Dr Keith Rowley on Monday, after he sent numerous letters to Dr Rowley which he said went unanswered.

Speaking to LoopTT, the 75-year-old activist said the project is not necessary when existing roads in these areas can be expanded and improved, likening the project to a ‘Petrotrin disaster’.

“It is another Petrotrin disaster in the making. It is a total waste, criminal waste of taxpayers’ money,” he said.

Samad said claims that the highway would encourage economic growth in the area is ‘a lie’.

“So why are you building this highway to Manzanilla? They want to develop Sangre Grande but the problem with traffic can be resolved by widening the road, there is enough space to make it a dual carriageway, a four-lane highway. You don’t have to buy additional land. The Valencia stretch has a road reserve, so you do not need this highway in the middle of nowhere.”

“Where they are building this new highway, a lot of it is private land and they will have to buy land, and we are not even talking about cost overruns yet,” he said.

“You know what is the main reason why we must not build that highway? The big elephant in the room, it’s because we don’t need it,” he said.

Samad asked for the relevant feasibility study to justify the ‘mega-project’ and pointed to the Manzanilla-Mayaro road which he said needs repairs.

“Repair the bloody roads, there are bad roads everywhere and they are not being repaired. We cannot afford more billions being wasted."

"The Minister of Works and Transport must focus on repairing the inumerable deplorable roads throughout the length and breadth of the country. Monroe Road and the Western Main Road need urgent attention, as well as the Fishing Pond Road and Arima/Blanchisseuse road," he said.

Samad also said he was informed that numerous persons have been buying land in the Toco and Sangre Grande areas in anticipation of the new highway project.

According to NIDCO, the planned project involves the construction of a new 14-kilometre section of the Churchill Roosevelt Highway (CRH) from the Cumuto Junction to Toco Main Road.

The proposed route commences at the proposed Cumuto Interchange #2 about 8km southeast of the CRH. It is proposed that the Highway will proceed East of Wallerfield, South of the Aripo Savannah, North of the Town of Sangre Grande and subsequently proceed in a South Easterly direction to end just beyond the Toco Main Road.

According to media reports, the project will cost taxpayers from TT$2-TT$5 billion.