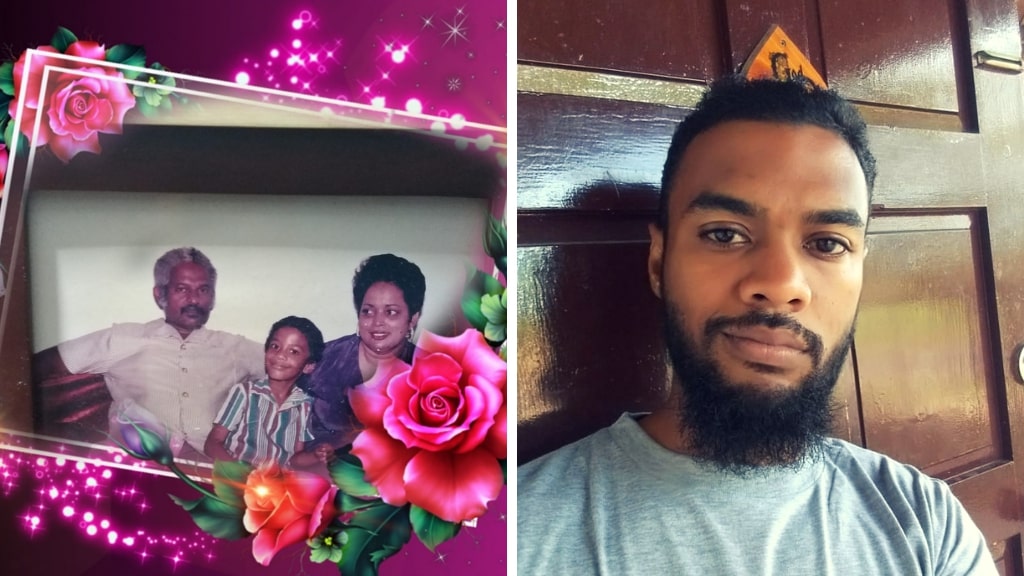 Photo L-R: Richard Sookradge as a child with his adopted parents. Sookradge tried to find his biological parents after his adopted parents passed away. Thanks to a story published by LoopTT, he was able to make contact. He is petitioning the State to review the laws surrounding adoption in T&T.

After a years-long search, 30-year-old Richard Sookradge, who was adopted as a baby, has finally made contact with his biological family.

Sookradge, who struggled to get information on his birth parents, was the first to take his matter as far as the High Court.

He had been unable to contact his biological mother as she was no longer at the address listed on the State's records at the time of his adoption. Further, due to the laws surrounding a closed adoption, he was prevented from accessing any information on her.

However, following an interview with LoopTT in March 2019 which was published online, Sookradge said he was finally able to make contact after his brother's wife reached out to him.

"My brother's wife reached out to me, but we didn't make the connection until I did further research, which lead me back to my brother," he said.

He said he has not physically met his brother or mother yet as they now live abroad, but he will see them in person soon.

Sookradge thanked everyone who helped him on this momentous journey.

"I would just like to thank God for making this way for me to finally find closure, and to everyone who helped me in this journey - without your support this couldn't happen," he said.

Sookradge said he is open to helping anyone else who was adopted and was seeking assistance in making contact with their biological parents.

He has also launched a petition to the State to review the legislation surrounding adoptions and adopted children who are trying to make contact with their biological parents; see the link here: http://bit.ly/2GXfhyh

30-year-old Richard Sookradge has never met his biological mother, and now is losing hope that he ever will.

Sookradge was adopted when he was just nine days old and said after his adopted parents, Pamela Anne Ramdial Sookradge and Richard Allan Anthony Sookradge, passed away some years ago, he has been searching for any hint of information on his biological parents.

His adopted parents were originally from Laventille then moved to Arima. His adopted mother's last known address was at Upper Pashley Street, Laventille, while his adopted father also had a previous address at 85 Fifth Street, Barataria.

His search, however, was stalled after learning that his birth mother moved from the last known address which had been recorded by the social welfare worker during the adoption process. There was no known location for his birth father, whose name was added to his certificate about one year later.

Sookradge said he is the only adopted person in Trinidad and Tobago to take this matter to the High Court in an effort to secure his birth certificate and find his biological parents.

“Strangely enough, my adoption is both open and closed. My adopted and biological mothers knew each other but for some reason it was also closed as well (meaning the names of the child’s biological parents remain anonymous).”

Sookradge said once he was adopted, he was given an adoption certificate which serves as national identification but applied to obtain his birth certificate to try to get more information.

“When the child reaches the age of adulthood they can apply for the birth certificate in order to find out who their parents are. As far as I know that’s the only right we have in terms of adoption.”

Sookradge said he went to the office of the Registrar General, the Children’s Authority, the maternity ward at hospitals as well as the magistrate’s court, without success.

“I realised that I was the only adopted person in Trinidad and Tobago to ever apply for their birth certificate,” he said.

He said even after consulting with the Children’s Authority and the Registrar General, the High Court judge in the matter due to privacy laws, unless the courts could contact his birth mother and gain her consent to be contacted, there was nothing he could do.

"The thing is my parents have the right of privacy and family life so that basically means that their personal lives are confidential and the only way to access this is from their consent or approval."

“Based on the last known address of my mom, she no longer lives at that address and the Children’s Authority and the Registrar General don’t know where she is,” he said.

Sookradge said he longs to one day see his birth parents and, perhaps, have some sort of relationship with them.

“My ideal scenario would be just getting to know them, reaching out to them and hopefully maybe be part of their family again. I don’t want to focus on why they gave me up for adoption.”

“I basically have no family now, I never grew up with siblings, both of my adopted parents are deceased and their relatives don’t talk to me. I’m all alone in the world and I really want to find them and know they can be part of my life, and maybe be a kind of family.”

“Even if they don’t want to be part of my life, at least I’ll know who they are and find some closure,” Sookradge said, who has also sought counselling in order to deal with this challenging experience.

He also lamented the archaic legislation which he said should be updated.

“I think it’s because of a lack of information out there. I didn’t know about my rights as an adopted child, it was only when I started digging.”

“I think most people don’t know where to start or what to do. Putting the information out there is really important in terms of what is the process of trying to find your parents and knowing your rights.”

“I think it’s also important that the government updates this legislation because there might be many more out there like me, searching for their biological parents.”

He also took DNA testing to determine his ancestry in the hope that he might find a link to them, however he only found links to distant cousins, not his parents.

Sookradge has issued a call via social media in the faint hope that someone might have information.

“Even though I’m the first person to do it, if we can bring public awareness about the procedure and to get the government to update the law it could help people in the future,” he said.

Anyone with information is urged to contact Sookradge at Richard.sookradge@gmail.com