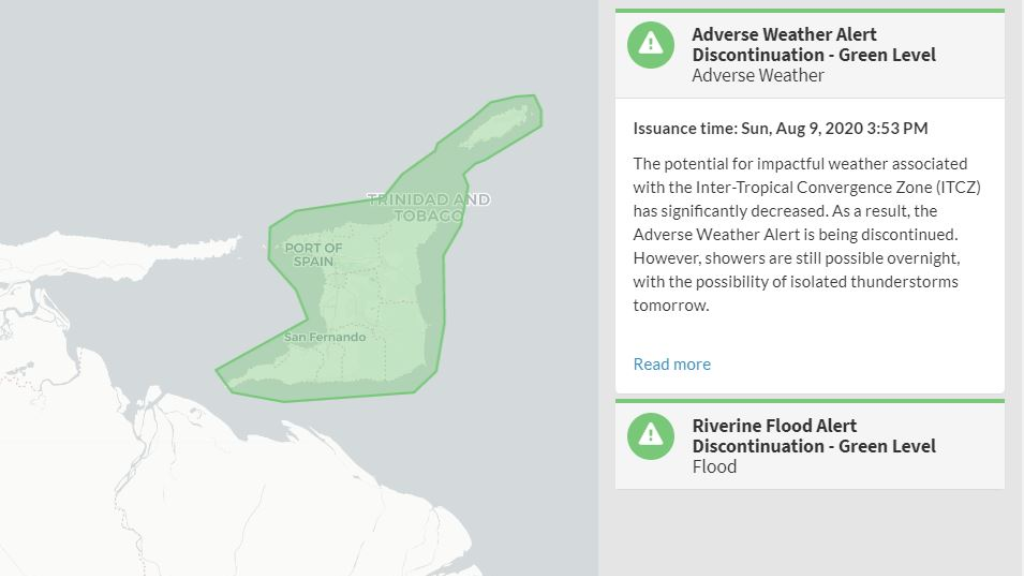 An adverse weather alert which was issued for Sunday has been discontinued.

The Trinidad and Tobago Meteorological Service said in an update Sunday afternoon that conditions were returning to normal however showers were still possible overnight:

'The potential for impactful weather associated with the Inter-Tropical Convergence Zone (ITCZ) has significantly decreased. As a result, the Adverse Weather Alert is being discontinued. However, showers are still possible overnight, with the possibility of isolated thunderstorms tomorrow.'

A riverine flooding alert which has been issued was also discontinued.

The public is advised to continue following the latest updates via the Met Office's official channels.

Additional rainfall is expected from midnight tonight and into the early parts of the morning, Sunday 9, August.

The Met Office on Saturday afternoon updated the Adverse Weather Alert for Trinidad and Tobago.

Adverse Weather Alert #2 - Yellow Level is now in effect until 5 pm on Sunday.

The Met Office noted that although there is currently a lull in activity with significant improvement observed in most areas across Trinidad and Tobago, the Inter Tropical Convergence Zone (ITCZ) remains active over our area.

"Some additional rainfall is expected after midnight tonight and into the early parts of the morning, Sunday 9, August 2020. This will result in occasional heavy showers and thunderstorm activity in a few areas, both in Trinidad and Tobago," it said.

The Met Office warned that gusty winds in excess of 50 km/h and street or flash flooding are likely in the vicinity of heavy showers and thunderstorms.

Conditions are expected to become settled during Sunday afternoon.

Citizens are urged to monitor weather conditions before venturing outside.

The Met Office has advised that the Inter Tropical Convergence Zone (ITCZ) has become active, resulting in occasional heavy showers and thunderstorm activity in several areas in both Trinidad and Tobago.

It issued an Adverse Weather Alert - Yellow Level on Saturday, warning of the associated conditions to affect the country between 2 am on Saturday and 5 pm on Sunday.

The Met Office said gusty winds in excess of 50 km/hr and street or flash flooding can occur in vicinity of heavy showers.

However, it noted that some improvement is expected from mid to late afternoon on Saturday until midnight.

Citizens are urged to monitor weather conditions and official updates.