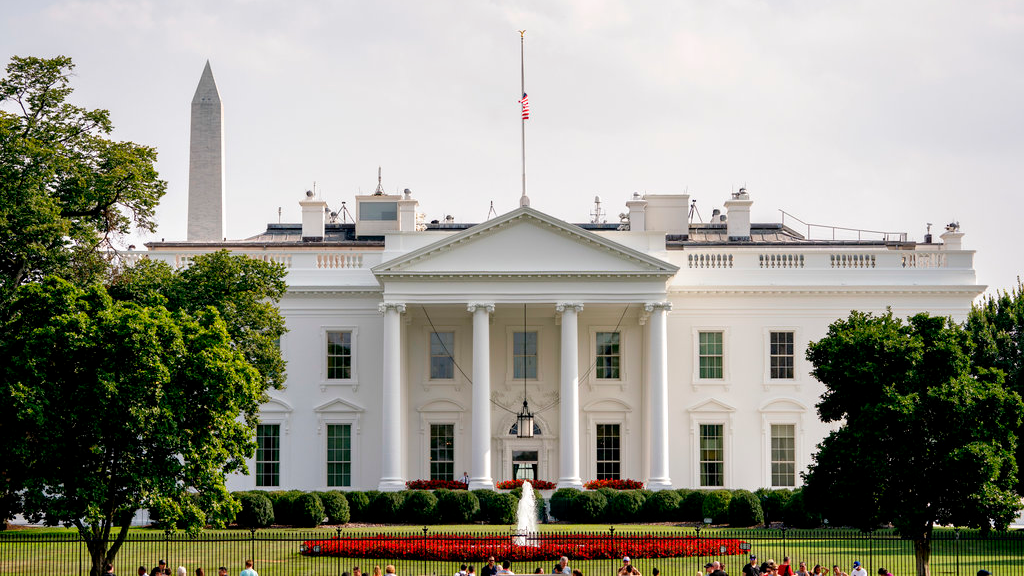 Glowering in public and near-silent for two days, President Donald Trump relented under pressure by tersely recognizing Senator John McCain's "service to our country" and re-lowering the White House flag.

While much of the nation remembered McCain's record as a war hero, longtime senator and presidential nominee over the weekend, Trump had nursed his grievances. McCain had been an infuriating foil in a long-running feud over style and policy that did not end with the senator's illness and death.

Trump's reluctance to participate in the national remembrance was awkward and uncomfortable, even by the standards of a leader who acknowledges he doesn't act like a typical president. The episode highlighted the outsider president's impulse to harbour personal resentments regardless of political repercussions.

Before Trump's Monday afternoon statement, his only commentary on McCain's death had been a perfunctory tweet Saturday. The lack of a formal statement — combined with the fact that White House flags were flown at half-staff only briefly — drew strong criticism from Republicans and veterans' groups as well as Democrats.

When he finally did comment, in a printed statement, Trump was sparing with his praise for the six-term senator: "Despite our differences on policy and politics, I respect Senator John McCain's service to our country."

Later, at an evening dinner honouring evangelical leaders, he said "our hearts and prayers" are going to the family "and we very much appreciate everything that Senator McCain has done for our country."

Earlier in the day, a stone-faced Trump sat mute as reporters at several photo sessions invited him to comment on McCain. As he was peppered with questions about McCain's legacy, the usually talkative president made no response.

Publicly, Trump has frequently railed against McCain's dramatic thumbs-down vote against the president's efforts to repeal President Barack Obama's health care law. Privately, he has groused about such slights as his belief that McCain did not appreciate his endorsement in the senator's 2016 re-election bid. McCain, for his part, recently slammed Trump's Helsinki meeting with Russian President Vladimir Putin as "one of the most disgraceful performances by an American president in memory."

Against that backdrop, the flag above the White House spoke volumes.

The Stars and Stripes were briefly lowered to half-staff over the weekend, then went back up to full height Monday while flags at the U.S. Capitol and elsewhere stayed at half-staff. Shortly before Trump issued his written statement, the flag was lowered again to half-staff.

That was after complaints had risen all day from both right and left, and then from a group the president assuredly does not want to offend.

"On the behalf of The American Legion's two million wartime veterans, I strongly urge you to make an appropriate presidential proclamation noting Senator McCain's death and legacy of service to our nation, and that our nation's flag be half-staffed through his interment," said a statement directed to him from Denise Rohan, the organization's national commander.

While the president's statement sought to defuse the controversy, the upcoming weeklong celebration of McCain's life is likely to bring new awkwardness. Former presidents will speak at McCain's funeral Saturday, but the senator's family made clear they did not want Trump to attend.

Trump said he had asked Vice President Mike Pence to speak at a ceremony honouring McCain at the Capitol on Friday and said other administration officials would attend memorial services. He also said he'd agreed to the McCain family's request for military transportation of the senator's remains from Arizona to Washington. Burial will be Sunday at the Naval Academy in Annapolis, Maryland.

In death, McCain himself had more to say. In a final letter released Monday, McCain appeared to repudiate Trump's politics one last time, saying, "We weaken our greatness when we confuse our patriotism with tribal rivalries that have sown resentment and hatred and violence in all the corners of the globe."

Republican Sen. James Inhofe of Oklahoma allowed that McCain "was partially to blame" for the rift with Trump, saying, "He was very outspoken that he disagreed with the president in certain areas and wasn't too courteous about it."

As Newsmax CEO Chris Ruddy, a Trump friend, put it, "I think there's a lot of hard feelings on both sides."

Just a few weeks ago the president signed into law a defence bill named in honour of the senator without a single mention of his name.

Back in 2015, McCain had gotten under then-candidate Trump's skin by saying he had "fired up the crazies" at a rally in Phoenix. Trump later told a crowd in Iowa that McCain was only a war hero "because he was captured. I like people who weren't captured."

McCain said Trump owed veterans an apology for that, but he continued to back the celebrity businessman as the Republican nominee. He later withdrew his support after the release of the infamous "Access Hollywood" tape in which Trump bragged about groping women.

After Trump took office, McCain established himself as a leading critic, opposing Trump's immigration-limiting order, warning him against cosiness with Moscow and lecturing him on the illegality of torture.

Friction increased earlier this year after word surfaced that a West Wing aide had been dismissive of McCain during a closed-door meeting. The aide told colleagues they should disregard McCain's opposition to Trump's CIA nominee because "he's dying anyway."

In death, McCain attempted a last word in his farewell letter.

"Do not despair of our present difficulties," he wrote. "But believe always in the promise and greatness of America, because nothing is inevitable here."

For McCain, a life of courage, politics came down to 1 vote