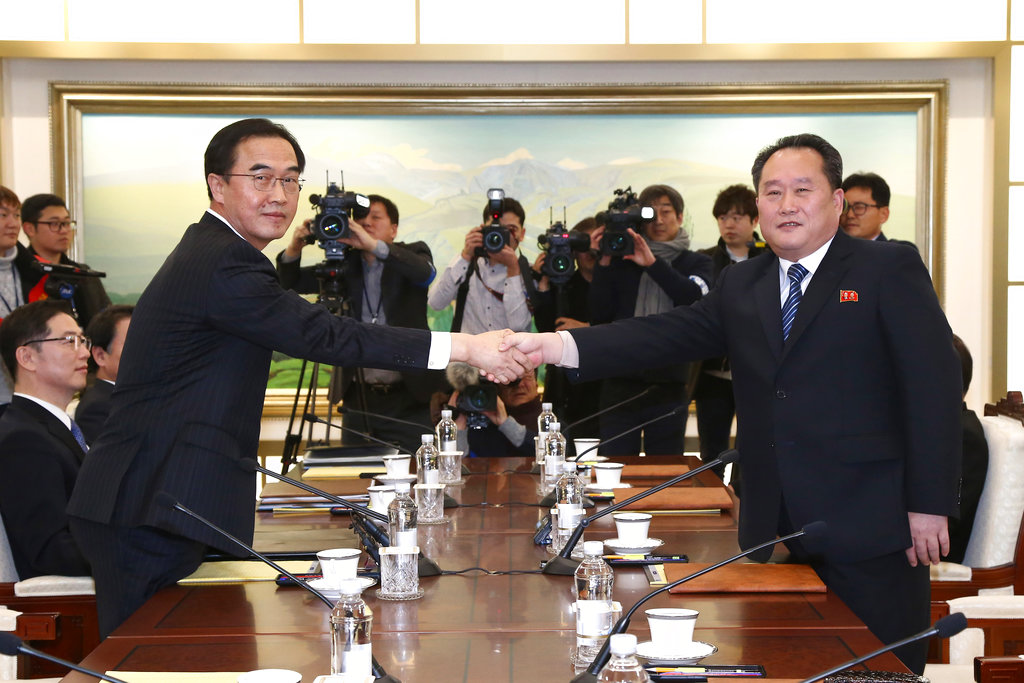 South Korea's president said Wednesday he's open to meeting with North Korean leader Kim Jong Un if certain conditions are met, as he vowed to push for more talks and cooperation with the North to try to resolve the nuclear standoff.

President Moon Jae-in has previously floated the idea of talks with Kim, but prospects for an inter-Korean summit remain low. His latest comments came a day after the North agreed to send a delegation to next month's Winter Olympics in South Korea and hold military talks on reducing animosity along their tense border — measures that Moon's government has been seeking.

The accords, reached at the first meeting between the rival Koreas in about two years, were widely viewed as a positive step following a year of escalating tension over Kim's rapidly advancing nuclear and missile programs. But critics cautioned against reading too much into North Korea's moves because tensions could flare again quickly as the North still openly seeks to expand its weapons arsenal. They also say Kim may be pushing for better ties with Seoul because North Korea is feeling the pain of U.S.-led international sanctions.

During a televised news conference in Seoul, Moon described the North's Olympic participation as "very desirable," but said that inter-Korean relations cannot improve without progress in the nuclear standoff, and vice versa.

Moon said North Korea will face harsher international sanctions and pressure if it resorts to new provocations, adding that "denuclearization of the Korean Peninsula is the path to peace and our goal."

Moon, a liberal who favors a peaceful, diplomatic solution to the nuclear issue, said he "keeps myself open to any meeting including a summit" with Kim if it could help improve inter-Korean ties and resolve the nuclear standoff. He said he will push for more talks and cooperation with North Korea for the same purpose.

"To have a summit, some conditions must be established. I think a certain level of success must be guaranteed," Moon said.

U.S. State Department spokeswoman Heather Nauert welcomed Tuesday's Korean talks, which she said were "aimed at ensuring a safe, secure and successful" Olympics. White House spokeswoman Sarah Huckabee Sanders also said the North's decision to attend the games presents it with an opportunity to see the value of ending its isolation from the rest of the world.

President Donald Trump on Saturday said he was open to talking with Kim himself while expressing hope for progress in the Korean talks. But U.N. Ambassador Nikki Haley later said Washington isn't changing its conditions on talks with North Korea, saying Kim first needs to stop weapons testing for a "significant amount of time."

Trump also contended that his tough stance had helped persuade the North to sit down with the South. During Wednesday's news conference, Moon said he feels thankful to Trump for helping make the talks happen.

Under Tuesday's deal struck at Panmunjom, a border village, North Korea will send a delegation of officials, athletes, cheerleaders, journalists and others to the Pyeongchang Olympics. The accord stipulates the two Koreas will "actively cooperate" in the Olympics to "enhance the prestige of the Korean people."

North Korea is not a winter sports power, and two of its figure skaters, Ryom Tae Ok and Kim Ju Sik, were its only athletes to qualify before the North missed a confirmation deadline. The International Olympic Committee said Monday it has "kept the door open" for North Korea to take part.

During the talks, North Korea told the South Korean delegation that it had recently restored a military hotline with the South, in the second reopening of an inter-Korean communication channel in about a week, according to South Korean officials. All major communications had been shut down because of tensions over the North's nuclear program in recent years. North Korea reopened one channel last week as signs emerged of improving ties.

The countries have a long history of failing to follow through with rapprochement accords. In 2015, negotiators met for nearly 40 hours before announcing a deal to pull back from a military standoff caused by land mine blasts that maimed two South Korean soldiers. But animosities flared again several months later after the North's fourth nuclear test.

In his New Year's Day address last week, Kim said he was willing to send a delegation to the Pyeongchang Games. Moon welcomed Kim's outreach and proposed the talks at Panmunjom, a proposal North Korea quickly accepted.