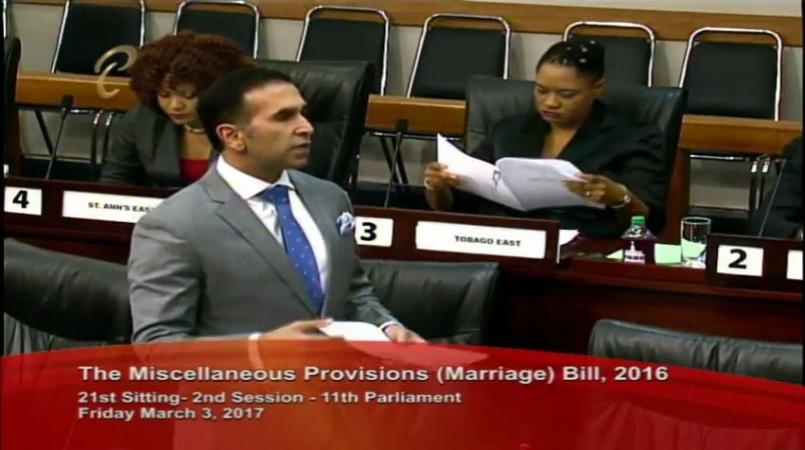 Speaking in Parliament on the Miscellaneous Provisions (Marriage) Bill, 2016 on Friday, Al-Rawi released statistics showing that the number of child marriages in 2016 involved members of Hindu, Muslim and Christian religions.

He said the issue is not specific to any one religion.

“Why I’ve tried not to fix this to any one religion is in recognition of a wrong statement that this thing is attractive (to) particular religions. This is not a Hindu, a Muslim phenomenon at all. Statistical information shows that Christians are equally in the same category.”

He said the issue has been painted as one particular to Hindus or Muslims and must be “entirely rejected”.

He added that this issue is ‘very much an urban phenomenon’, occurring in the urban centres.

He said statistics over a 10-year period show that over 90 percent of participants in child marriages involved girls, who often married men who were sometimes almost three times their ages.

“Statistically, that shows a gender disparity of 97.85 percent female and 2.156 percent male.”

“We found a very startling phenomenon…spread across years from 2006 – 2016, the fact is that in 2016 in Trinidad and Tobago we have had child marriages.”

“We continue to have child marriages. We had children at the age of 14, girls, being married…15, 16. When we looked to the occupation of the male, this is what we found.”

“We had a 14-year-old, the occupation of her husband was secondary school student.”

Al-Rawi pointed to various international conventions as examples of the direction in which the country must follow in order to protect the rights of the child.

However, Princes Town MP Barry Padarath again questioned the Bill in light of Al-Rawi’s removal of the three-fifths majority and accused him of ‘cherry-picking’ his references.

He said there are also various international reports which conflict with the position put forward by the AG.

Gender and Child Affairs Minister Ayanna Webster-Roy, however, agreed with the Bill, saying that children should be allowed to be children.

“At the age of 16 I was still a naïve schoolgirl running around the village, doing what schoolchildren do.”

“At 16, even 18, marriage isn’t in their psyche. They’re not thinking about making a full-time lifetime commitment. Even at my age it’s a challenge to manage two children, far less for a 12-year-old. It is hard for them, it would be difficult for them.”

“By giving our girls and boys the opportunity to live their childhood…T&T will hopefully be more productive more grounded, more serious about making a contribution.”

“Today, politics is not our first priority but ensuring what we do is right for the girls and boys of Trinidad and Tobago (is).”

Mayaro MP Rushton Paray said the three-fifths majority should be re-added to the Bill in order to allow for the Opposition to have a say.

"At 16 we're talking about young adults, because 13, 14, 15 is out of the question. Religious leaders are asking for the opportunity to deal with the reality when things fall apart."

“They (children) will do things, it’s natural….when things fall apart, the mothers will reach by pundits, the priests, the imams…that is why their views must be taken into consideration.”

He also addressed the issue of the Bill not needing a three-fifths majority, asking why it was removed.

"Why couldn't we have pulled the 3/5 majority from (other bills), why this Bill?"

He said government should be engaging in deliberation and collaboration for legislation which so widely affects the population.

"We should be very careful that we are not attacking the democratic processes that (are) enshrined in the constitution."

Khan said the song was clearly aimed at ridiculing the Hindu community.