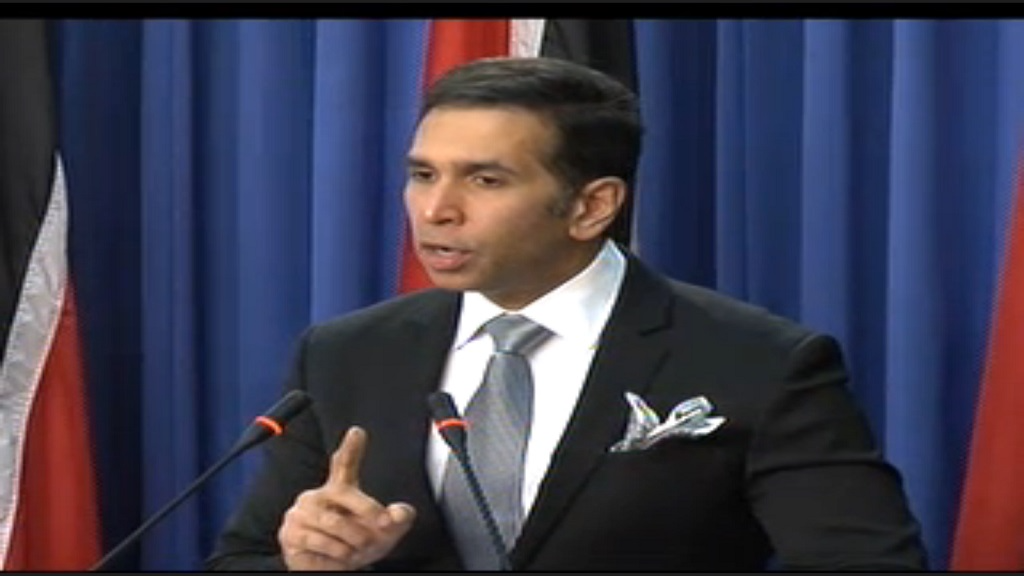 The Financial Intelligence Unit (FIU) has recorded a whopping $22 billion in 'suspicious transactions' for the year 2017, an increase of 500 percent compared to the figures for 2016.

Speaking at a post-Cabinet briefing on Wednesday, Al-Rawi said Government intends on treating with this by laying in the Parliament an anti-corruption package, which includes measures such as the Stand Alone Civil Asset Forfeiture Provisions and a revision of the manner in which land is registered in Trinidad and Tobago.

“The suspicious transactions that have been unearthed are in the hundreds,” he said.

The number of suspicious transactions recorded in 2016 totalled 736, amounting to $4.5 billion.

However, that number has increased to 877 in 2017 with 824 completed transactions estimated at $8.4 billion, while 53 interrupted transactions were believed to have amounted to $13.6 billion.

The Ministry said the greatest number of reports stem from the banking sector and the money value transfer services.

He added that there are a number of 'politically exposed persons' that have found themselves onto the FIU's database of suspicious activity.

He added investigations are being conducted regarding money laundering and cartel-type behaviour as well as suspected fraudulent activity outside of the country, along with civil matters for the recovery of corruption-driven transactions.

Al-Rawi said during the past financial year, 2503 registrants from various sectors such as banking and commercial sectors, were recorded, a marked increase in the number of reporting entities as compared to that of 2016.

"This is the first administration to have confronted active corruption by embarking on activities to follow money transferred outside of the country with the objective of retrieving said money. In this light, the Opposition is to be carefully examined in terms of their lack of support for legislative amendments in this matter."

"Moreover, this report is anchored in gang activity and how criminality prospers under legislation as well as money laundering and the financing of terrorism as suspected transactions associated with criminal organisations, including gangs that have been identified by the TTPS, were reported."

Al-Rawi said Government has been advocating and progressing the legislative strengthening of the FIU and that some of those amendments are before the Parliament on the Miscellaneous Provisions Bill.

He said next year the public will hear more about the anti-corruption measures and other improvements being made both on the civil and criminal front.

He added that the Opposition is to be ‘carefully looked at’ in terms of their legislative support.

“We notice that we have not received support for the important amendments that we bring," he said, adding that some of these issues would have been addressed had the Anti-Gang Bill been approved.

He said these suspicious activities are related to a number of criminal associations, including gangs which have been identified by law enforcement agencies

“This issue is closely related to criminality as it is related to gang activity. Some of these measures will require the support of Opposition,” he said.

Al-Rawi commended the FIU for the work done so far.

"The FIU deserves a public commendation for the kind of work that they have produced with the support of the ministries of Finance and National Security. This item will feature prominently on the Government’s agenda in the coming months."

“I’d like to give a serious commendation to the Trinidad and Tobago Police Service and intelligence agencies. They deserve a public commendation for the kind of work they produce."

"The population must by now be recognising that there has been an increase in the reaction time for arrests…arrests for cash stolen at the airport, arrests for murders, arrests for rapes, arrests for gang activity…we’re seeing a definite trend upwards and that has been facilitated by a significantly improved intelligence arena. We’re heading in the right direction,” he said.

He added that as the Ministry's anti-corruption projects progress, the public will be made aware of developments going forward.

Also present at the briefing was Minister Stuart Young.