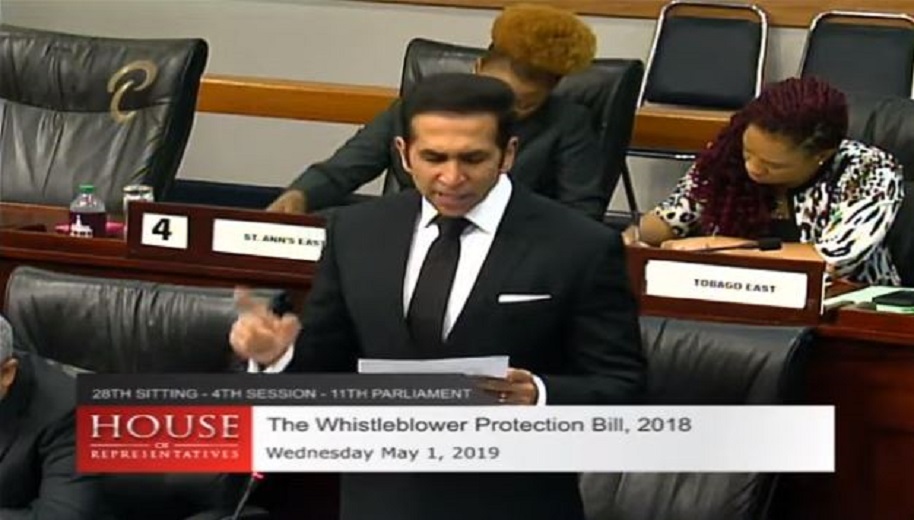 The Government and the Opposition will not be exempt from prosecution once the Whistleblower Protection Bill 2018 is passed in Trinidad and Tobago.

This was revealed by Attorney General Faris Al-Rawi who said whistleblowers will be protected from civil and criminal prosecution as they are free to “blow the whistle” on both the Government and the Opposition.

Al-Rawi made the comment as he piloted the Whistleblower Protection Bill, 2018 in the Parliament on Tuesday.

The bill requires a three-fifths majority to be passed.

The AG said the Bill is in keeping with the government’s promise to battle white collar criminal activity. It seeks to protect whistleblowers from consequences associated with lawfully revealing knowledge about misconduct. This includes protection from job loss, discrimination or intimidation, threats to life, victimization etc.

Speaking on the importance of the Bill, Al-Rawi noted that the process for convicting persons who misbehaved in office was difficult.

He said information from a prosecutorial audit shows that the police service receives thousands of reports on matters. This figure drops to hundreds once the matter reaches the magisterial courts and then to single digits if it goes to the court of appeal.

The AG says this law, along with the Evidence Amendment Bill, seeks to encourage whistleblowers to step forward.

He further called on the Opposition to support it as he recalled that an Opposition Senator refused to vote in support of the Bill at the Joint Select Committee stage in 2015.

“Are you prepared to encourage whistleblower protection to give citizens a fighting chance? To combat corruption?”

The Bill was redrafted because it infringed on the privacy of individuals.

Meanwhile, the AG noted that anyone could give information to 22 agencies. However, persons considering to divulge false information can face jail. Evidence must be provided for claims to be considered legitimate.