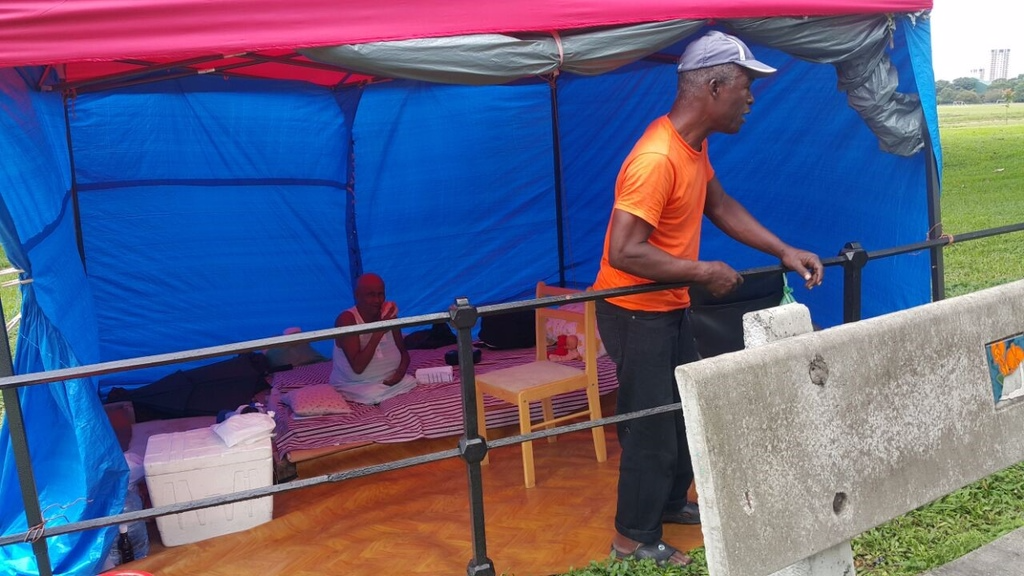 The Ministry of Agriculture, Land and Fisheries said it is committed to finding a resolution to assisting the couple currently living in the Queen's Park Savannah.

This, following a meeting with the couple, former boxer Wendell Joseph and his wife, on Wednesday.

In a statement, the Ministry said  following torrential showers and flooding in parts of the capital yesterday, Director of the Horticultural Services Division of the Ministry of Agriculture, Land and Fisheries David Chadee  led a team of ministry officials and medical personnel on a site visit to the Queen’s Park Savannah to assess the circumstances of a couple who have, for the third time in recent years, taken up residence at the northern end of the park.

"The Ministry of Agriculture is today clarifying that officials of the Horticultural Services Division had been meeting with Mr Wendell Joseph and his wife Erica for several days and their visit early Wednesday was done as a gesture of goodwill and out of concern for the couple’s health and well-being.

"Unfortunately, and despite the urging of the medical personnel on-site, Mrs Joseph, who uses a wheelchair, declined an offer to be taken to the Port-of-Spain General Hospital for examination. Mr and Mrs Joseph also both declined an offer by Mr Chadee to be relocated to more suitable accommodations provided by the Ministry of Social Development despite the fact that the area where they had set up a tent had become waterlogged," the Ministry explained.

The release said this is the third time the Josephs have taken up residence at the Queen’s Park Savannah.

"The Ministry understands that up to 2014, the couple had been allocated five HDC apartments, including ground-floor units with wheelchair access, but they had issues with the allocations. Our understanding is that in 2014, through a collaborative effort by the Housing Development Corporation (HDC) and the Ministry of Social Development, a sixth HDC apartment had been secured for the Josephs but they again reported issues with this unit," the Ministry said.

The Ministry said it remains committed to maintaining the integrity and safety of public spaces under its jurisdiction, including the Savannah.

"At the same time, we are mindful of the need for inter-ministerial intervention in working with the Josephs. The Ministry intends to pursue a resolution of this matter as part of its strict enforcement of the regulations prohibiting people from residing in the Queen’s Park Savannah or any other national park."