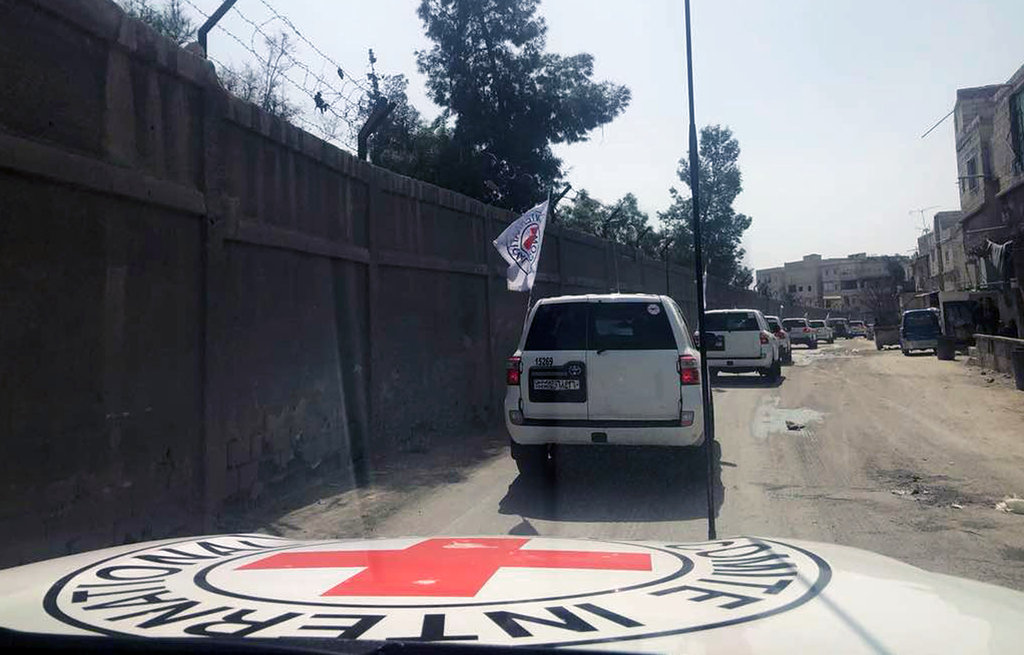 Desperate for food and basic medicines, many of the besieged and bombarded Syrian civilians in Damascus' eastern suburbs of Ghouta waited on Monday as a 46-truck convoy organized by the United Nations and key aid agencies began entering the rebel-held enclave.

The U.N.'s humanitarian office said the convoy with health and nutrition supplies, along with food for 27,500 people in need, entered the town of Douma in the besieged eastern Ghouta. In a Twitter posting, it said however that many life-saving health supplies were not allowed to be loaded.

The delivery would be the first to the region in nearly three weeks and the first to Douma, the largest and most populated town in eastern Ghouta, since November.

U.N. officials had said that lack of approvals and consensus among the warring parties, as well as the limited duration of a daily, five-hour Russian-ordered humanitarian pause, had made aid delivery impossible.

Eastern Ghouta, home to some 400,000 people, has been under a crippling siege and daily bombardment for months. More than 600 civilians have been killed in the last two weeks alone.

"This delivery of assistance is a first positive step that would lessen the suffering of the civilians in the area," said Ingy Sedky, a spokeswoman for the International Committee of the Red Cross in Damascus.

"However, more needs to be done in the coming period," she added. "A one-time aid delivery will never be enough to fulfil the needs. Repeated and continuous access to Eastern Ghouta by humanitarian organizations is a must."

Pawel Krzysiek of the International Committee of the Red Cross said earlier that the inter-agency convoy had arrived in Wafideen, a key crossing point set up by the Syrian government for civilians wishing to leave eastern Ghouta and also for aid to enter the enclave.

Tarik Jaserevic, a spokesman for the World Health Organization, also said that during Monday's obligatory routine inspection conducted by Syrian authorities, many of the supplies in the WHO shipment were rejected — including all trauma, surgical, dialysis kits and insulin.

The only U.N. delivery of assistance to eastern Ghouta so far this year was on Feb. 14, when a convoy with assistance for 7,200 people reached Nashabiyah, a town in the suburbs.

Syrian President Bashar Assad vowed on Sunday to continue with the military offensive in eastern Ghouta, saying the five-hour daily "humanitarian pause" for the area would continue, to allow for any civilians wishing to leave to do so.

"There is no contradiction between the truce and the military operation," Assad said in comments broadcast on Syrian TV.

The daily humanitarian pause was ordered last week by Russian President Vladimir Putin, a key ally of Assad. It has been implemented with daily violations for the past week, although no civilians have left the encircled region.

The Syrian government, meanwhile, said it achieved "significant" progress in its ongoing military operation in eastern Ghouta, seizing around 36 percent of the total area held by different armed groups.

Syria's Central Military Media said troops continued their advance from the east and were only 3 kilometers (1.8 miles) from meeting up with troops advancing from the west, which would cut eastern Ghouta into two parts.

Monday's announcement came a day after troops recaptured Nashabiyah and a number of villages and farms in eastern Ghouta in the largest advances since the government's wide-scale operation began last month.

In Geneva, the U.N.'s top human rights body on Monday called for U.N.-mandated investigators for Syria to conduct an urgent and targeted probe of the recent violence in eastern Ghouta.

The Human Rights Council adopted a resolution proposed by Britain instructing its Commission of Inquiry on Syria, created six-and-a-half years ago, to conduct a "comprehensive and independent inquiry into the recent events" in eastern Ghouta and report back at the next council session in June.

The resolution also threw the council's support behind a Security Council resolution passed last month, calling for a 30-day cease-fire across Syria to allow humanitarian aid in and to evacuate the sick and injured.