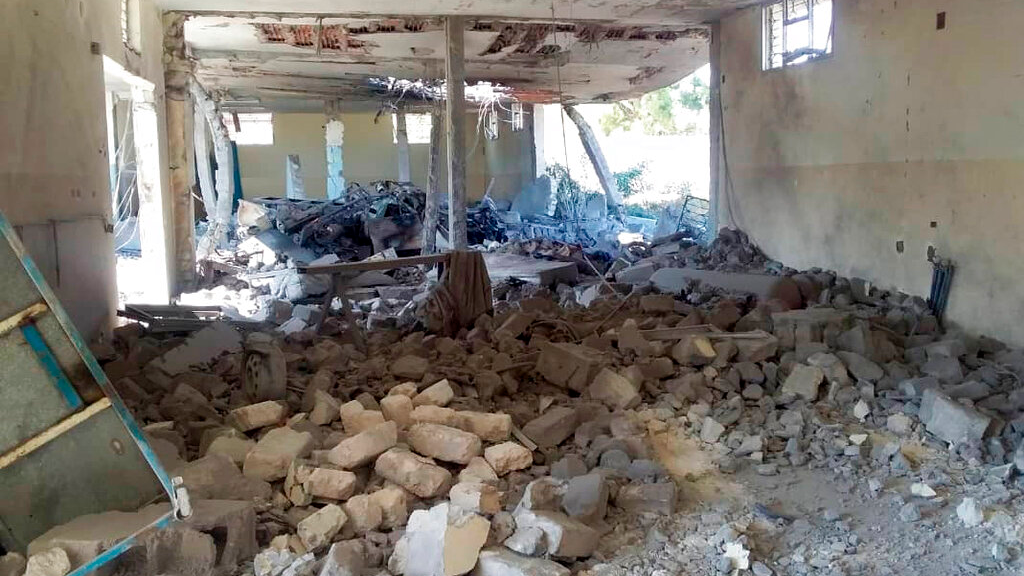 The death toll from an airstrike that slammed into a military academy in Libya's capital climbed to at least 30 people, most of them students, health authorities said Sunday, as fighting over control of Tripoli between rival armed groups escalated.

Eastern Libyan forces led by General Khalifa Hifter launched an offensive in April to take the capital from the weak but UN-supported government. Libya is governed by rival authorities in the east and in Tripoli in the west, with each relying on different militias.

The airstrike took place late Saturday in the Hadaba area, just south of the city center, the health ministry of the Tripoli-based government said. Fighting and shelling between the two sides has been raging for months in the area.

The UN-supported Libyan government blamed the airstrike on Hifter's self-styled Libyan National Army. A spokesman for the LNA did not respond to phone calls seeking comment.

Hifter has declared a "final" and decisive battle for the capital. That followed a military and maritime agreement Tripoli authorities signed with their ally Turkey calling for the deployment of Turkish troops to Libya.

Turkey's parliament on Thursday authorized sending forces to Libya to support Tripoli authorities. Libya's eastern-based parliament condemned the move along with other regional and world powers.

Ghassan Salame, the UN envoy to Libya, said Turkish troops on the ground would further diminish chances for ending the violence.

Salame expects the warring Libyan groups to meet for peace talks in Germany in mid-January.

The ambulance service in Tripoli said the airstrike also wounded at least 33 people. It posted images of dead bodies and those wounded being treated at a hospital.

The UN Support Mission in Libyan condemned in "the strongest terms" the attack. It warned in a statement against "growing escalation" in the violence.

The city's siege has killed hundreds of people, mostly combatants, and displaced thousands of families in Tripoli and the surrounding areas.

The conflict threatens to plunge Libya into levels of chaos rivalling the 2011 uprising that ousted and later killed its ruler Moammar Gadhafi.

France, Egypt, Russia, Jordan, the United Arab Emirates and other key Arab countries support Hifter and his allies in the east. The Tripoli-based government is backed by Qatar, Italy and Turkey.

Last month, UN experts in a report to the UN Security Council said that "Jordan, Turkey and the United Arab Emirates routinely and sometimes blatantly supplied weapons, with little effort to disguise the source" in violation of the UN arms embargo.

They identified multiple cases of non-compliance with the arms embargo. The majority of weapons transfers to Hifter's LNA came from Jordan or the United Arab Emirates, while the majority of military supplies to the Tripoli government came from Turkey, the report said.

The UN panel said neither side in Libya has "the military capability" to win the stalemated conflict.

Grenada-flagged ship released after being detained off Libya