Ajax eliminate Real Madrid in round of 16 of Champions League 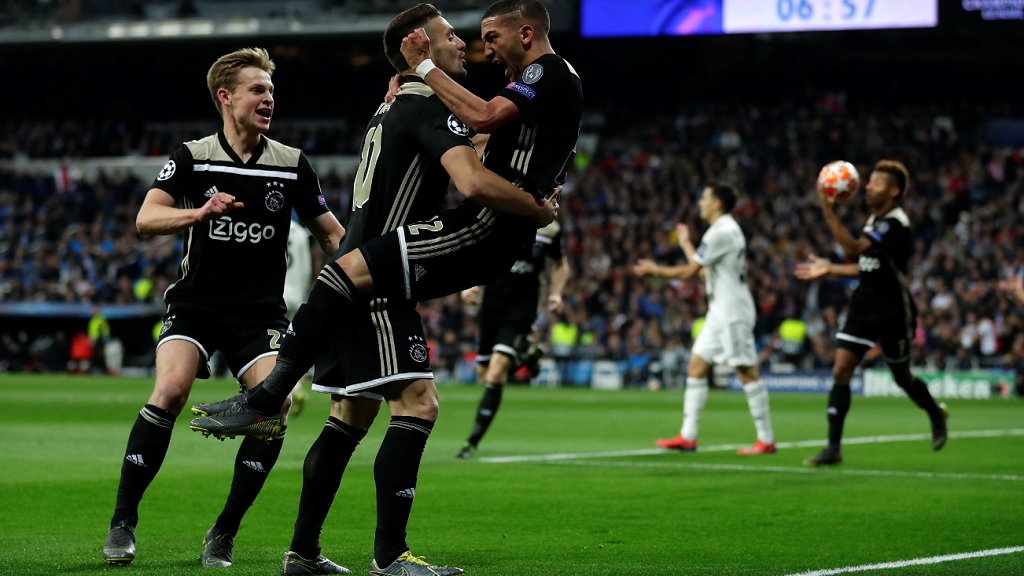 Real Madrid's dismal run of form continued as Ajax won 4-1 at the Santiago Bernabeu to dump the Champions League holders out of the competition for the first time since 2014-15.

After winning Europe's elite club tournament in three consecutive years under Zinedine Zidane, a tough first campaign since the French icon's departure was capped in remarkable fashion on Tuesday in a 5-3 aggregate loss.

Madrid fell apart in the first half and saw their 2-1 first-leg lead overturned in the opening 20 minutes by goals from Hakim Ziyech and David Neres as Ajax ran riot.

The irrepressible Dusan Tadic added another with a controversial second-half strike, leaving Madrid requiring three goals to stay in the competition, and although Marco Asensio got one back, a fourth home defeat in a row never looked in doubt as Lasse Schone made it four.

With two of those reverses coming at the hands of bitter rivals Barcelona last week before this humbling, the pressure will undoubtedly build on head coach Santiago Solari's position.

The unmarked Raphael Varane headed against the crossbar inside five minutes, but Ajax settled into the contest thereafter and two superb pieces of creative play from Tadic swiftly wiped out Madrid's away goals.

Tadic first darted in behind Nacho Fernandez to square for Ziyech to sidefoot into the bottom left corner and then the Serbia international left Casemiro in a spin and played in Neres for a calm finish.

Ajax passed up further chances before a horrible half for the hosts was compounded by injuries to Lucas Vazquez and Vinicius Junior in quick succession.

Substitute Gareth Bale, jeered off the pitch against Barca, was again whistled by his own supporters and almost gifted Ziyech a third goal before striking the post at the other end.

Madrid scarcely improved after the restart and Tadic was rightly the man to put the tie beyond them, slamming into the top-left corner before a lengthy delay as VAR finally advised the referee that the ball had not gone out of play earlier in the move.

A belated response saw Asensio slide a finish beyond Andre Onana, but there was no let up in Ajax's attacking ambition and a glorious Schone free-kick caught out the scrambling Thibaut Courtois, before a frustrated Nacho was sent off in stoppage time.

Mourinho: Real Madrid made me a better manager and person