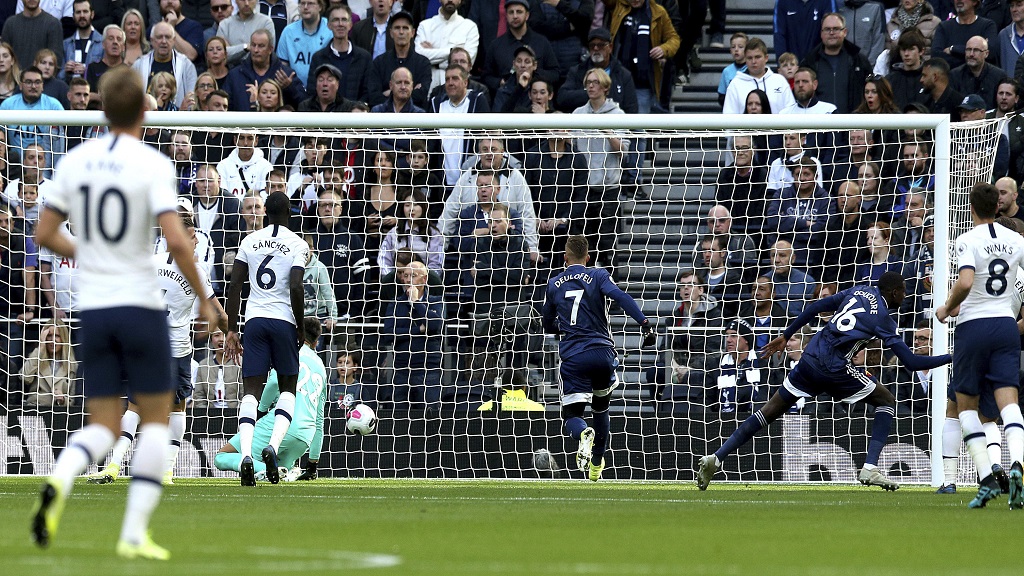 Watford's Abdoulaye Doucoure, 16 at 2nd right, celebrates scoring the first goal of the game against Tottenham in the English Premier League at Tottenham Hotspur Stadium in London, Saturday Oct. 19, 2019. (Jonathan Brady/PA via AP).

Dele Alli scored a late equaliser on Saturday as Tottenham narrowly avoided another humbling loss, salvaging a 1-1 home draw against last-place Watford in the Premier League.

Watford looked headed for their first league win of the season after Abdoulaye Doucoure put the visitors ahead in the sixth minute and Tottenham once again looked short of inspiration as they struggled to find a response.

But Alli scored his first goal for Spurs since January in the 86th minute, capitalising on a goalkeeping mistake by Ben Foster. Alli beat Foster to a ball in an aerial duel and slotted the ball into the net with his second touch.

There was huge confusion in the stadium, though, as VAR checked for a possible handball by Alli, and the big screens then flashed a message that the goal had been disallowed. However, the referee pointed to the spot and the goal stood.

It saved Spurs from a third straight loss in all competitions, following the embarrassing 7-2 rout by Bayern Munich in the Champions League and a 3-0 defeat to Brighton before the international break.

However, this latest setback still puts more pressure on manager Mauricio Pochettino, with Tottenham near midtable and losing more ground to their top-four rivals.