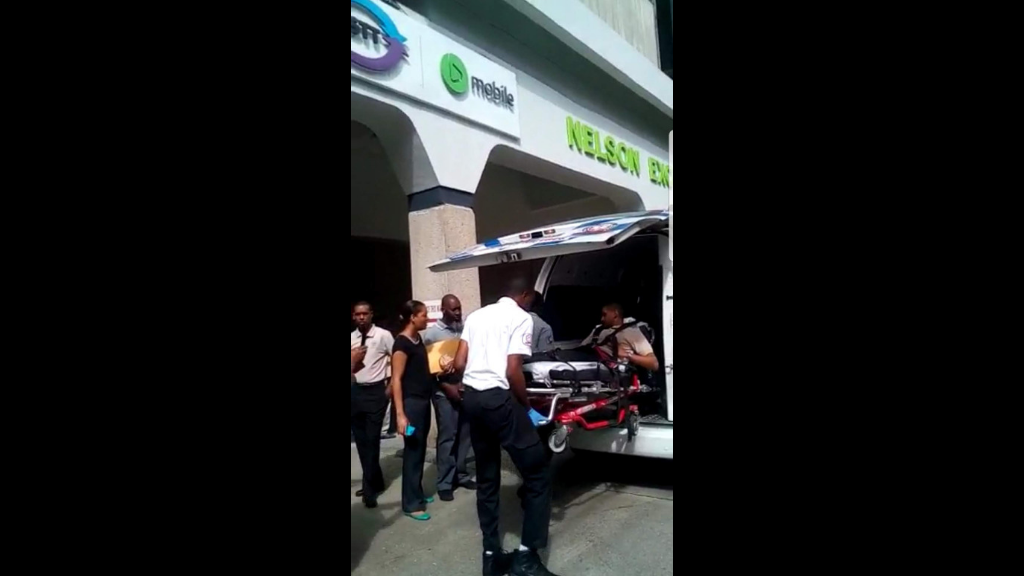 Union leader injured: CWU leader Clyde Elder is taken away in an ambulance following an incident at TSTT's Port-of-Spain head office in which he was allegedly thrown out by security personnel.

Security personnel at the Telecommunications Service of Trinidad and Tobago (TSTT) have been accused of unjustifiably physically assaulting leader of the Communication Workers’ Union (CWU) Clyder Elder.

Trade unions, including the Joint Trade Union Movement (JTUM) have spoken in condemnation of the ‘criminal act’ which took place at TSTT’s Nelson Exchange in Port-of-Spain around 8.30 am on Wednesday.

Elder was left with soft tissue damage after he was physically thrown out of the building.

Video of the incident which has been shared across social media, shows Elder discussing grievances with workers following the announcement of additional retrenchments at the company today.

He was then approached by guards who informed him that Vice President of Human Resources, Carol David, instructed them to remove him from the compound.

The Union leader was adamant that he was acting within the law and stated that he would not leave until he addressed the employees’ concerns.

But, as Elder attempted to make his way to another floor to speak with other employees, he was accosted by security. It was then that things got physical

A woman is heard in the background shouting: “Allyuh too wicked” as the union leader was pushed from behind.

A second video shows Elder lying on the pavement outside of the building, grimacing in pain.

He was placed on a stretcher and lifted into an ambulance which took him to hospital for treatment.

The trade unionist has since filed a police report and has contacted his attorneys with the intent of seeking legal recourse.

In condemning Wednesday’s assault against Elder, JTUM said the action taken by TSTT security was “criminal, a gross violation of trade union rights and an assault on the Trade Union Movement”.

“There can be absolutely no justification given for an employer to authorise the use of force against a Trade Union Leader in his execution of his trade union duties; in his capacity as head of a Recognised Majority Union.

The JTUM also condemns whoever is responsible for giving the authorisation to use such highhanded measures to deter this Trade Union Leader from speaking to his membership,” the union added.

JTUM is calling for those responsible to be brought to justice.

The All Trinidad General Workers’ Trade Union (ATGWTU) also condemned the assault on the Union leader and voiced its support.

The Union accused Government of being “anti-labour” and not acting in the interests of workers.

“The Government has once again shown that it is not only the most anti-labour organisation this Country has ever seen, but it is quite prepared through its agents, to violate the labour laws of Trinidad and Tobago with impunity, and deny workers their constitutional rights to association and representation.”

The retrenchment of 51 workers on Wednesday follows the distribution of retrenchment letters to 503 employees less than a month ago.

"We had to make these very difficult decisions to ensure that TSTT continues to fulfil its mandate to provide ubiquitous and affordable leading-edge solutions for the people of T&T," Walcott said.