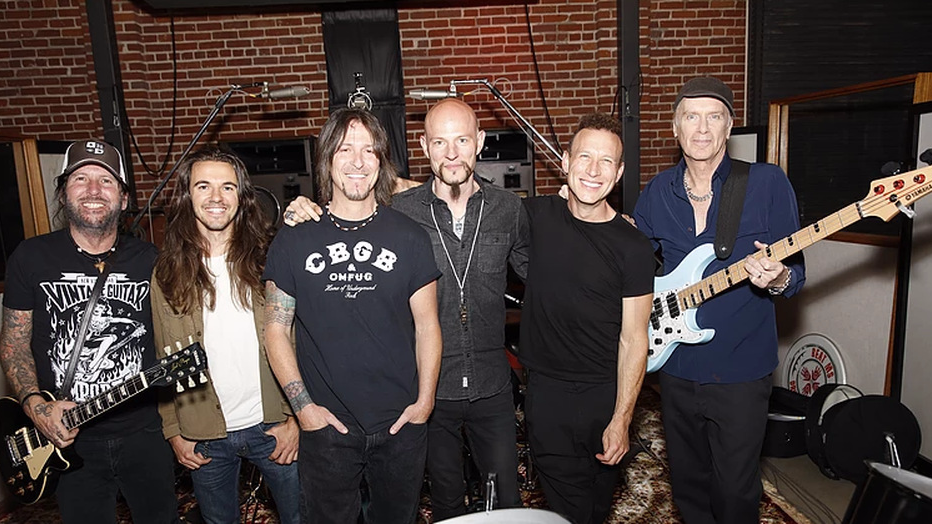 If Tracey Thornton has his way, the steel pan may one day have pride of place as a permanent fixture on a Las Vegas stage.

Thornton is the founder of Pan Rocks, a steelband concert that fuses rock music with that of the steel pan.

Pan Rocks has been around for some years but it was only when rock band Jane’s Addiction posted a video of a session with the band playing one of their songs that many of us sat up and paid attention.

The video has over 2400 likes and over 790 shares to date on Jane’s Addiction's Facebook page.

When Loop reached out to Thornton, he said he first heard the steelpan on the Jane’s Addiction song “Jane Says” that was released in 1987 on the band’s self-titled debut album.

“I found out it was a steel drum. I didn’t know about it and then I got hold of some Panorama music and I heard Pan by Storm,” he said.

Pan By Storm, a song written and arranged by Professor Ken Philmore, was the song of choice for the San Fernando-based Fonclaire in 1990, when the band came closest to winning its first Panorama title but lost my a mere few points.

The song resonated with Thornton.

“That is my favourite Panorama tune of all time,” he said. “That tune sounded like Rock and Roll, it had the same energy. I spent a few years learning the culture, music and calypsoes."

Thornton met Professor in the US and later came to Trinidad where he played in a few bands under Professor as well as Phase II under Len Boogsie Sharpe.

Married to a Trinidadian woman from Princes Town, the former heavy metal drummer said he has been coming to T&T every year either for Christmas or Carnival.

Thornton has been playing rock since he was a teen and though it is his first love he was drawn to the pan and decided to fuse them together.

Thornton produced a series of albums under the Pan Rocks brand through his label Steel Pandemic records.

In 2013, the idea for a series of concerts called Pan Rocks took root.

It was easy to find players, said Thornton, who revealed that pan is popular at schools throughout the US.

“In 2013 we put on the first one and invited a few schools and before we knew it we had 150 players on stage.  It worked and then a lot of schools around the country wanted to be involved. A lot of schools have steel band programmes here, they are all over, it is really crazy what is going on with steel band in the States,” he said.

In 2015, Thornton presented at PASIC, the largest drum and percussion event in the world. He put together an 80 piece band for the presentation and caught the attention of a drummer who played for Pink and Cher.

“Through him, I met Matt Starr who helped to put this project together,” he said.

The project was called Project LA and drew 24 pannists from the US and Canada to Ocean Studios Burbank in California.  Jane’s Addiction drummer Stephen Perkins, Billy Sheehan, a bassist who has played for David Lee Roth, Tracii Guns, founder of glam metal group LA Guns and guitarist Bruce Kulick of the band Grand Funk Railroad were part of the project which was filmed with a 360-degree camera.

A documentary chronicling the project will be released at a later date.

Thornton plans to take the Pan Rocks project on the road with T&T as his ultimate goal.

He said the concept allows him to do two things: fuse his two musical loves and to promote the steel pan and its mecca.

“I am not the greatest pan player but I have a lot of visibility. I am opening the doors that can lead people down the rabbit hole to discover the likes of Professor Ken Philmore, Victor Provost, Boogsie and Liam Teague,” he said.

He said there are still lots of people who think Jimmy Buffett when they hear the steel pan but with Pan Rocks he hopes to turn the next generation of American children onto the instrument.

“You can do it without formal training and play a song really quickly,” he said.

WATCH: NLCB Fonclaire march to the beat of their own pan