Amid perceived power vacuum, dozens vie to be Haiti's leader 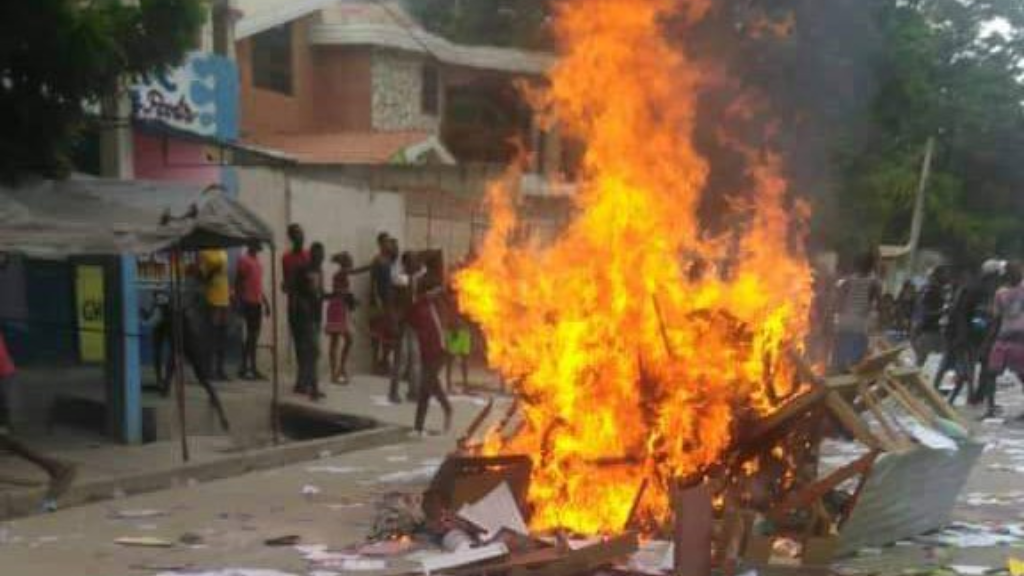 Opposition leaders range from a wealthy grocery-chain owner to a collection of veteran politicians with murky pasts, some with allegations of corruption and ties to organized crime. Despite unifying outrage at Moïse's political and economic mismanagement, protesters say the absence of a charismatic leader and a clear strategy is fueling chaos and the sense of an unending crisis.

Moïse still has more than two years left in his term after taking office in February 2017 and says he will not step down despite violent protests that have shuttered businesses and kept 2 million children from going to school for nearly a month. Nearly 20 people have died and about 200 injured in protests fueled by anger over corruption, rising inflation and scarcity of basic goods including fuel.

With Moïse unyielding, the opposition disorganized and the international community on the sidelines, Haiti likely faces months or even years of dysfunction that's deep enough to cause widespread misery and political and economic free-fall without causing a government overthrow.

"It's a completely dysfunctional country," said Benzico Pierre with the Center for the Promotion of Democracy and Participatory Education, a Haitian think tank. "There's no trust in the institutions."

It's a concern that Carl Murat Cantave, president of Haiti's Senate, acknowledged in a speech televised Tuesday as he warned that Haiti's crisis is "rotting."

He urged Moïse to launch a dialogue and said all options should be placed on the table.

"The country needs a genuine re-engineering so it can move forward because everyone is failing as a leader," he said in Creole. "Only the people right now have legitimacy."

Hours after Cantave's speech, Moïse's office issued a statement saying he has named seven people charged with leading discussions to find a solution to help end the crisis. Among them is former prime minister Evans Paul, who recently told The Associated Press that he believes Moïse has several options, including nominating an opposition-backed prime minister and shortening his mandate.

On Wednesday, opposition figures who are leading the protests rejected Moïse's statement, saying the commission has no credibility.

"A head of state who respects himself and who respects his people does not create, in times of crisis, a commission of negotiation with his advisers and his spokesmen. This is not serious," attorney André Michel told The Associated Press.

Michel was one of 70 candidates who participated in the presidential election of 2015, the same year he had his U.S. visa revoked for what he says are unknown reasons. He is now a member of an opposition coalition called the Consensual Alternative, which is organizing the protests.

Also a member of that coalition is Senator Youri Latortue, a retired military official who is considered one of Haiti's most powerful politicians. He worked under former presidents Jean-Bertrand Aristide and René Préval and has denied corruption allegations including drug trafficking that the U.S. made against him more than a decade ago. Until recently, he led a party allied with Moïse's Tet Kale faction until he broke away.

"The president has shown he is incapable of governing," Latortue told AP.

He noted that a company once owned by Moïse was named in a Senate investigation that found that huge sums of money from a Venezuelan subsidized oil program were misspent during Haiti's previous government. Moïse has denied any wrongdoing. The investigation also named several former top government officials from the administration of President Michel Martelly, who preceded Moïse in office and is an ally.

Other members of the coalition include former Army Col. Himmler Rébu, who was accused of instigating an attempted 1988 coup against a transitional government installed after former president Jean-Claude Duvalier was forced out, and Senator Sorel Jacinthe, a one-time Moïse ally who recently told local reporters that certain legislators accepted money to approve Moïse's choice for prime minister.

Joining veteran politicians in their call for Moïse's resignation is well-known Haitian businessman Reginald Boulos, a former doctor with no political experience who is vying to become president.

"There is no way the president can ever recover his credibility, his legitimacy," Boulos told AP, adding that his goals if elected include the redistribution of wealth and a greater investment in agriculture.

Opposition leaders have created a nine-person commission they say would be responsible for overseeing an orderly transition of power and help choose Haiti's next leader, noting that the constitution calls for the head of the Supreme Court, who was appointed by Moïse earlier this year, to take over if a president resigns.

The leaders also have rejected any suggestion of dialogue, saying they want Moïse to step down immediately.

In her first public comments on Haiti's current situation, U.S. Ambassador Michele Sison told the AP that the country needs a functioning government that can address people's pressing needs. She urged all elected leaders, including Haiti's president, senators and deputies, to work together to identify and agree on a peaceful way forward.

"We're urging the various stakeholders to enter into dialogue in good faith, a dialogue launched and led by Haitians," she said.

Moïse also called for dialogue and unity nearly two weeks ago during a televised speech broadcast at 2 a.m., further angering Haitians. He hasn't spoken in public yet and only briefly appeared in front of a business called Nick's Exterminating last Thursday to shake hands with a handful of vendors in the capital of Port-au-Prince before his convoy sped away.

As protesters continue to clash with police, set up barricades and march through parts of Port-au-Prince and elsewhere in Haiti, many Haitians say they are eager to welcome a new leader but they also warn that they will keep an eye on them.

"They don't work for those who are weakest," said protester and activist Claude Toussaint.

Many demonstrators, such as entrepreneur Pascéus Juvensky St. Fleur, say the protests are not only about replacing a president, but changing a system that they say marginalizes many in a country of nearly 11 million people where 60% makes less than $2 a day and 25% make less than $1 a day.

St. Fleur tapped on a worn copy of Haiti's constitution as he said that Article 35 guarantees freedom to work and that only all Haitians together can bring about change.

Mexico returns 81 migrants to Haiti amid US pressure