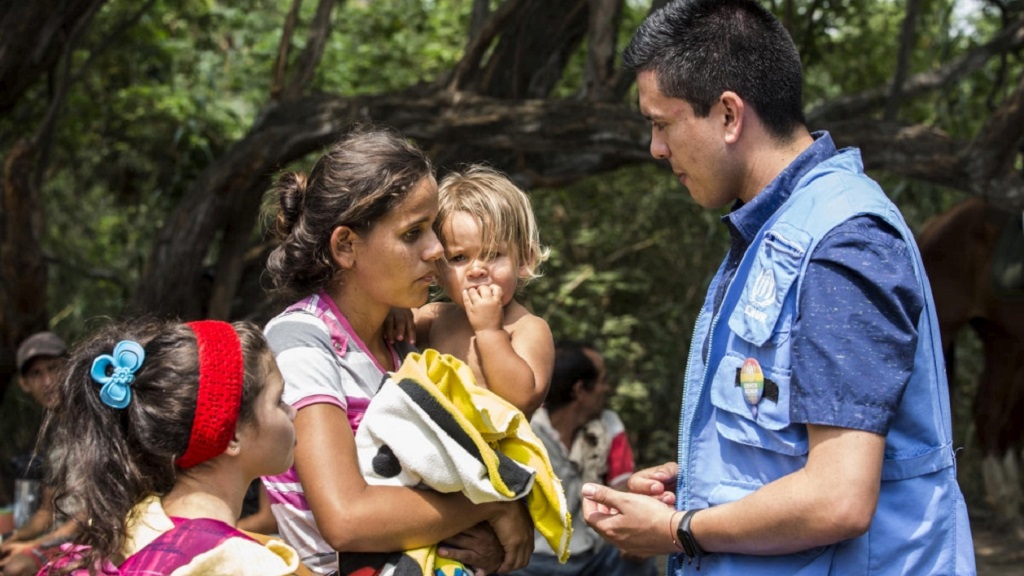 Photo: A UNHCR official speaks to Venezuelan refugees in Colombia.

Amnesty International said it welcomes the launch of Trinidad and Tobago’s migrant registration process which will allow Venezuelans to work for up to one year in the country.

The Venezuelan national identification registration process is open to all Venezuelans who are here, whether legally or illegally, (with the exception of those with work permits or residency documents) and will give them a chance to be able to work in the country for up to one year.

However, in a statement to Prime Minister Dr Keith Rowley on May 28,  Erika Guevara Rosas, Americas Director, raised several questions regarding the registration process, including the two-week time-frame.

“Based on government information, the proposed period for registration will only last for two weeks, and register approximately 28,000 people, between 31 May and 14 June 2019.

“Amnesty International is concerned that the proposed period is likely to be too short to register such a large number of potential applicants and would like to receive further information about how your government proposes to process all the applicants in such a limited period of time, and how it plans to safeguard the confidentiality of those that register and ensure that it does not fall into the hands of the Venezuelan authorities,” Rosas said.

The group also called on government to provide access to education for refugees.

The group is also asking what would be the consequences for refugees who did not register, calling for refugee legislation to be enacted.

“We would also like further information about what will happen to those migrants and refugees that are unable to register during this timeframe.”

“While Amnesty International welcomes states that propose alternatives for Venezuelans to gain legal residency, the proposed registration process does not exempt Trinidad and Tobago from its obligations under the Convention relating to the Status of the Refugees (1951 Refugee Convention) and its Protocol (1967), to respect the rights of those seeking asylum.”

“As such, in line with the recent recommendation of Trinidad and Tobago’s Joint Select Committee on Human Rights, Equality and Diversity on the Treatment of Detainees at the Immigration Detention Centre, we strongly urge your government to approve national refugee legislation, consistent with international law and standards. We welcome the Attorney General’s stated willingness to prepare the legislation,” the organisation said.

After one year, what next?

The group is also asking for information following the end of the one-year period.

“Amnesty International would like further information about what options will be made available for asylum-seekers and recognized refugees following expiration of the one-year amnesty period.

“We remind your government that asylum-seekers and refugees are protected from forcible return to a country in which their life or freedom may be in danger on account of race, religion, nationality, membership in a particular social group or political opinion.

“As such, deportation of those registered with UNHCR would be contrary to international law,” the group said.

The group noted with concern media reports that boats were turned away, saying this violates Trinidad and Tobago's agreement with the 1951 Refugee Convention.

“Amnesty International also notes with concern a series of recent media reports which suggest that the Trinidad and Tobago authorities have turned back boats of Venezuelan migrants and asylum-seekers pursuing legal entry.”

“As previously raised with your government, the principle of non-refoulement, prohibits states from transferring people to another country or jurisdiction where they would face a real risk of serious human rights violations or abuses, and is binding on all states as part of customary international law.”

“According to international law, when a state establishes effective control over a boat, that state is responsible for securing and protecting human rights, including allowing access to asylum procedures if anyone claims a fear of return to their country.”

“As such, if Trinidad and Tobago authorities are indeed returning boats of Venezuelans, they may be doing so in violation of the non-refoulement principle.”

Rosas also criticised the reference to Venezuelans as migrants, referring to the UNHCR’s guidance notes which now identifies them as refugees.

“Prime Minister, those fleeing Venezuela are overwhelmingly not “economic migrants” from whom your government needs to “protect (the) interests of the people of Trinidad and Tobago” as you stated in a recent press conference, but people in need of international protection fleeing a situation in which their lives, security and freedom are at risk.”

“Just days ago the UNCHR updated its Guidance Note on Venezuelans, detailing that the majority fleeing Venezuela are in need of refugee protection.”

The group said it is willing to lend assistance if required.

“Amnesty International also stands ready to offer guidance to your government on the implementation of its international human rights obligations,” the group said.