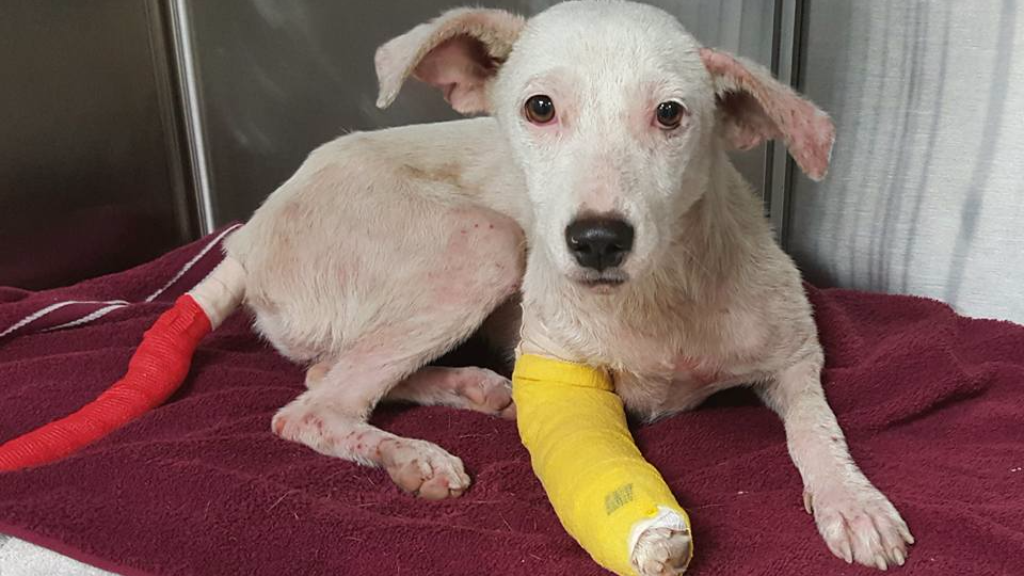 Photo: Lilly was rescued by the Animal Welfare Group and residents of Carenage after she had been thrown down a 20-foot drain and rocks were tossed at her.

Animal lovers are once again calling on Government to amend legislation protecting animals, after a series of cruel incidents including the poisoning of animals in a supermarket carpark.

Animal welfare group Animals Alive has launched a petition, which will be submitted to Attorney General, Faris Al-Rawi, calling for more protection for the nation's animals.

President of the group, Kathryn Cleghorn, said too many animals are being tortured, neglected and abused.

"This is an open letter to the Attorney General. Last night I watched a new vehicle drive down the shelter road and fling two cats into the bamboo and drive off."

"This was after an exhausting day of rounds of looking after the shelter animals. The poor shell-shocked cats shot off in the darkness and disappeared. Who knows if they are alive still."

"The question is how can persons be so cruel to abandon their pets and devalue their lives. Does the blame lie in the fact that the school system does not teach young people enough about respect for animals and the interrelatedness of humans and animals or is it because there are hardly any strong laws to protect animals from cruelty and make offenders accountable?"

Related article :‘Lilly’ recovering after being dumped into 20-foot drain

"Cruelty is an acceptable norm. Animal Shelters and Animal Welfare Groups are inundated with calls and cases of abuse and we have no successful way of dealing with these reports. SOS calls for animals are hardly taken seriously by the police."

"So animals are still in 2017, largely unprotected by the law."

"Please Mr Attorney General get the the welfare and interest groups to convene so we can recommend the updating of laws and the increase of fines and by so doing protect our animals from cruelty."

"This is long overdue and we are begging. Pet ownership especially needs to be a regulated and legal undertaking. If jurisprudence is too lengthy a process, then fines could simply be increased."

"This good source of revenue will also be a grand deterrent for persons who may want to take advantage of animals," the group said.

The group added that the State should help subsidise the cost for spaying and neutering dogs in order to prevent additional cruelty being meted out to animals.

"Most importantly, the State needs to subsidize the spaying and neutering of dogs and cats because the most widespread form of cruelty is how unwanted litters have to needlessly suffer."

"Please, I plead on behalf of the Animals Welfare groups as we crave a more humane and civil society for Trinidad and Tobago."

After recovering from fall, Lilly searches for 'furever home'

Citizens upset over photo of animal seen dangling from truck