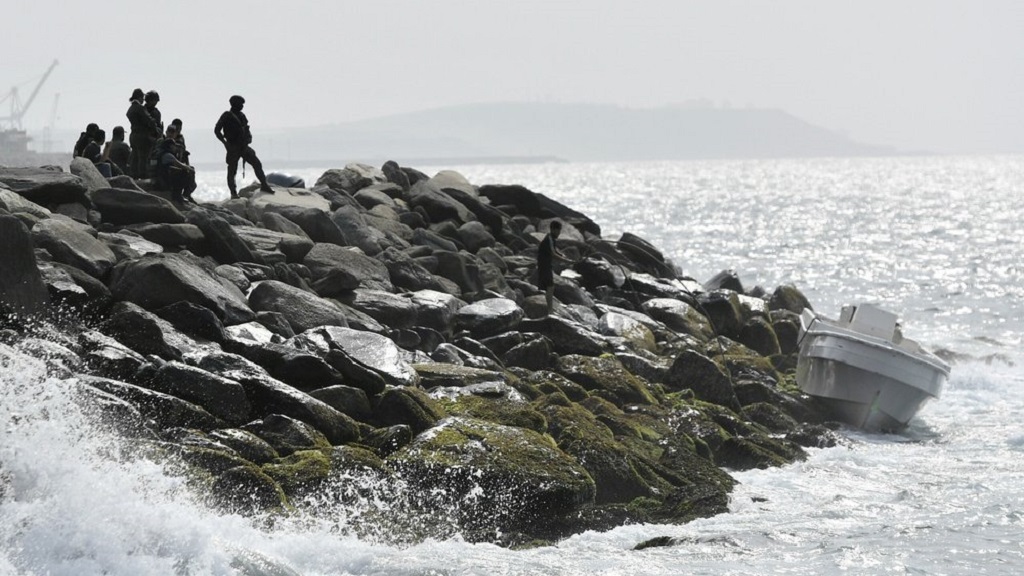 Security forces guard the shore area and a boat in which authorities claim a group of armed men landed in the port city of La Guaira, Venezuela, Sunday, May 3, 2020. Interior Minister Nestor Reverol said on state television that security forces overcame before dawn Sunday an armed maritime incursion with speedboats from neighboring Colombia in which several attackers were killed and others detained. (AP Photo/Matias Delacroix)

A former Green Beret has taken responsibility for what he claimed was a failed attack Sunday aimed at overthrowing Venezuelan President Nicolás Maduro and that the socialist government said ended with eight dead.

Jordan Goudreau's comments in an interview with an exiled Venezuelan journalist capped a bizarre day that started with reports of a predawn amphibious raid near the South American country's heavily guarded capital.

An AP investigation published Friday found that Goudreau had been working with a retired Venezuelan army general now facing US narcotics charges to train dozens of deserters from Venezuela's security forces at secret camps inside neighbouring Colombia.

The goal was to mount a cross-border raid that would end in Maduro's arrest.

But from the outset the ragtag army lacked funding and US government support, all but guaranteeing defeat against Maduro's sizable-if-demoralized military.

It also appears to have been penetrated by Maduro's extensive Cuban-backed intelligence network.

Both Goudreau and retired Venezuelan Captain Javier Nieto declined to speak to the AP on Sunday when contacted after posting a video from an undisclosed location saying they had launched an anti-Maduro putsch called "Operation Gideon." Both men live in Florida.

"A daring amphibious raid was launched from the border of Colombia deep into the heart of Caracas," Goudreau, in a New York Yankees ball cap, said in the video standing next to Nieto who was dressed in armored vest with a rolled-up Venezuelan flag pinned to his shoulder. "Our units have been activated in the south, west and east of Venezuela."

Goudreau said 60 of his men were still on the ground and calls were being activated inside Venezuela, some of them fighting under the command of Venezuelan National Guardsman Captain Antonio Sequea, who participated in a barracks revolt against Maduro a year ago.

None of their claims of an ongoing operation could be independently verified. But Goudreau said he hoped to join the rebels soon and invited Venezuelans and Maduro's troops to join the would-be insurgency although there was no sign of any fighting in the capital or elsewhere as night fell.

In an interview later with Miami-based journalist Patricia Poleo, he provided a contradictory account of his activities and the support he claims to have once had — and then lost — from Juan Guaidó, the opposition leader recognized as Venezuela's interim president by the US and some 60 countries.

He provided to Poleo what he said was an 8-page contract signed by Guaidó and two political advisers in Miami in October for $213 million.

The alleged "general services" contract doesn't specify what work his company, Silvercorp USA, was to undertake.

He also released via Poleo a four-minute audio recording, made on a hidden cellphone, in the moment when he purportedly signed the contract as Guaidó participated via videoconference.

In the recording, a person he claims is Guaido can be heard giving vague encouragement in broken English but not discussing any military plans.

"Let's get to work!" said the man who is purportedly Guaido.

The AP was unable to confirm the veracity of the recording.

There was no immediate comment from Guaidó on Goudreau's claim that the two had signed a contract. Previously, Guaidó has said he hadn't signed any contract for a military incursion.

Goudreau said he never received a penny from the Guaidó team and instead the Venezuelan soldiers he was advising had to scrounge for donations from Venezuelan migrants driving for car share service Uber in Colombia.

"It's almost like crowdfunded the liberating of a country," he said.

Goudreau said everything he did was legal but in any case he's prepared to pay the cost for anything he did if it saves the lives of Venezuelans trying to restore their democracy.

"I've been a freedom fighter my whole life. This is all I know," said Goudreau, who is a decorated three-time Bronze Star recipient for courage in deployments to Iraq and Afghanistan as a special forces medic.

Asked about why his troops would land at one of Venezuela's most fortified coastlines — some 20 miles from Caracas next to the country's biggest airport — he cited the example set by Alexander the Great, who had "struck deep into the heart of the enemy" at the Battle of Guagamela.

The government's claims that it had foiled a beach landing Sunday triggered a frenzy of confusing claims and counterclaims about the alleged plot.

While Maduro's allies said it had been backed by Guaidó, Colombia and the US, the opposition accused Maduro of fabricating the whole episode to distract attention from the country's ongoing humanitarian crisis.

"Those who assume they can attack the institutional framework in Venezuela will have to assume the consequences of their action," said socialist party boss Diosdado Cabello, adding that one of two captured insurgents claimed to be an agent of the US Drug Enforcement Administration.

Both US and Colombian officials dismissed the Venezuelan allegations.

"We have little reason to believe anything that comes out of the former regime," said a State Department spokesperson, referring to Maduro's government.

"The Maduro regime has been consistent in its use of misinformation in order to shift focus from its mismanagement of Venezuela."

Venezuela has been in a deepening political and economic crisis under Maduro's rule. Crumbling public services such as running water, electricity and medical care have driven nearly 5 million to migrate.

The United States has led a campaign to oust Maduro, increasing pressure in recent weeks by indicting the socialist leader as a drug trafficker and offering a $15 million reward for his arrest. The US also has increased stiff sanctions.

In addition to US economic and diplomatic pressure, Maduro's government has faced several small-scale military threats, including an attempt to assassinate Maduro with a drone in 2018 and Guaidó's call for a military uprising a year ago.

Cabello linked Sunday's attack to key players in the alleged plot led by Goudreau and Retired Major General Cliver Alcala, who is now in US custody awaiting trial after being indicted alongside Maduro on narcoterrorist charges.

One of the men he said was killed, nicknamed "the Panther," had been identified as involved in obtaining weapons for the covert force in Colombia.

Guaidó accused Maduro's government of seizing on the incident to draw the world's attention away from the country's problems.

"Of course, there are patriotic members of the military willing to fight for Venezuela," Guaidó said. "But it's clear that what happened in Vargas is another distraction ploy."