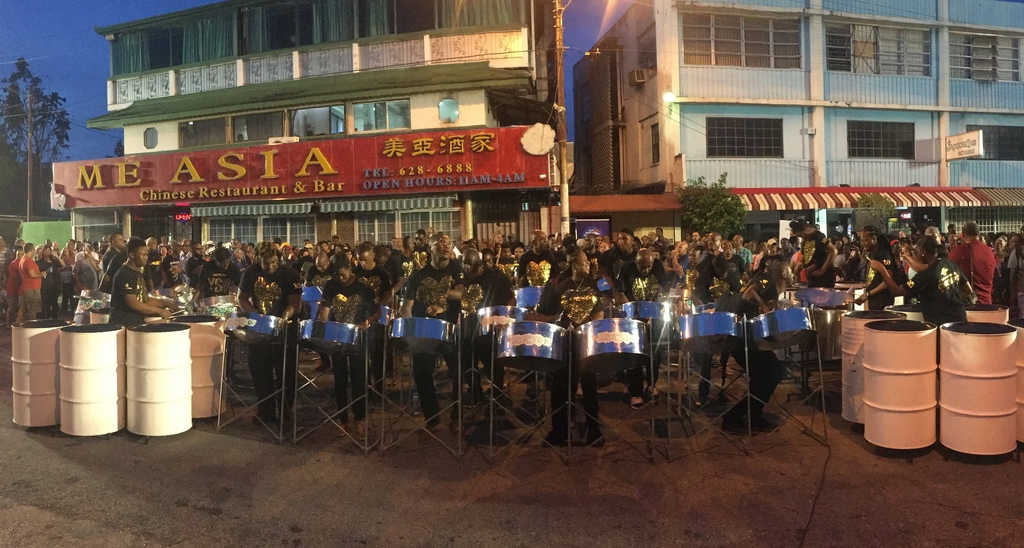 Hundreds of spectators savoured a variety of local performances on Sunday at MusicTT’s concert entitled Live on the Avenue. The event, which was hosted on Ariapita Avenue in Port of Spain, was the first executed at that location. Live on the Avenue is one of the activities being implemented as part of the Live Music District (LMD) pilot project.

The Ministry of Trade and Industry and MusicTT partnered with the Ministries of Community Development Culture and the Arts, National Security and Tourism, the Port-of-Spain City Corporation and the 2018 Panorama Champions, BP Renegades to offer the public an evening of pan and performances. The National Lotteries Control Board is a primary sponsor of the LMD.

Minister of Trade and Industry, Senator the Honourable Paula Gopee-Scoon lauded all stakeholders involved for ensuring its continued success. The event, she added, afforded local artistes a forum for showcasing their talent as the government seeks to enable commercialization of the country’s creative sector.

“This event is just one of many that have created opportunities for both up-and-coming and established artists to be heard while, simultaneously, providing music lovers with the entertainment they crave,” says MusicTT’s Chairman, John Arnold.

“MusicTT has partnered with various venues throughout Port-of-Spain, this phase’s chosen district, to host live performances. They have shown great support for the development of the local artists and the music industry as a whole. We hope to continue these existing partnerships, as well as build new ones, as the project progresses.”

BP Renegades, clad in black and gold, took to the streets and gave an energetic, crowd-stirring performance. They treated the onlookers to a medley of songs, including their title-winning version of Voice’s 'Year for Love'. Performing along with BP Renegades were some of the Live Music District’s artists: Neal and Joel, Sherisse Collymore, Chenko and Xone. Each performer brought their own unique flavour and style to popular local and international songs.

The creation of the Live Music District is a key strategy being undertaken by MusicTT through CreativeTT and the Ministry of Trade and Industry in order to address some of the challenges of stakeholders in having performance opportunities.  Access to music performance spaces was seen to be a major issue for music creatives, most of whom work a full-time job parallel to their musical activities. In this four-month pilot phase, Trinidad and Tobago’s first Live Music District has established an online means by which venues and artists can connect, be booked and have regular performances throughout restaurants, bars, lounges and hotels. This music-tourism hub is intended to be a new tourist attraction outside of the Carnival season, creating jobs and other related forms of revenue generation.