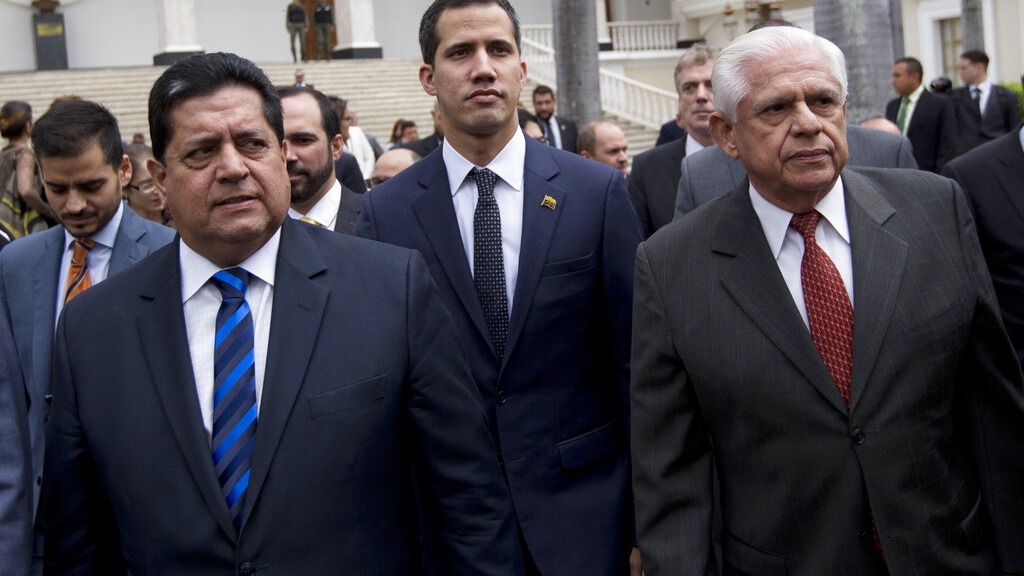 European and Latin American countries that support Venezuela's opposition condemned on Thursday the arrest of a top lawmaker who backed calls for a military uprising against President Nicolás Maduro.

Edgar Zambrano, vice president of the opposition-controlled National Assembly in Venezuela, was leaving his Democratic Action party's headquarters on Wednesday when he was detained by members of Venezuela's intelligence agency who surrounded his car.

The Lima Group, which includes a dozen Latin American countries and Canada, said his arrest was unconstitutional because his parliamentary immunity was illegally lifted.

Germany also called for the release of the No. 2 leader of the Venezuelan congress, which is coming under increasing pressure as Maduro's government seeks to subdue the U.S.-backed opposition led by Juan Guaidó.

Richard Blanco, another National Assembly member facing possible arrest, told VPItv, a local media outlet, that he had sought refuge in the Argentine embassy in Caracas. Still another, Mariela Magallanes, is staying at the home of the Italian ambassador in the Venezuelan capital.

Opposition activist Leopoldo López entered the home of the Spanish ambassador last week, after he joined Guaidó in a failed attempt to get the military to topple Maduro. López was detained for leading anti-government protests in 2014 and had been under house arrest for two years before he was freed.

Maduro has not tried to arrest Guaidó, who is leading a campaign for political change after declaring himself interim president of Venezuela in January. The United States says Maduro was elected illegitimately last year and has warned of severe repercussions if the Venezuelan government moves to detain the National Assembly leader.

Despite intense international pressure, Maduro has maintained the support of the bulk of Venezuela's military, which did not heed Guaidó's appeal for an uprising on April 30. Six people died during clashes between police and protesters that followed the opposition's bid to oust the government.

Maduro describes Guaidó as a collaborator in a U.S.-engineered coup plot.