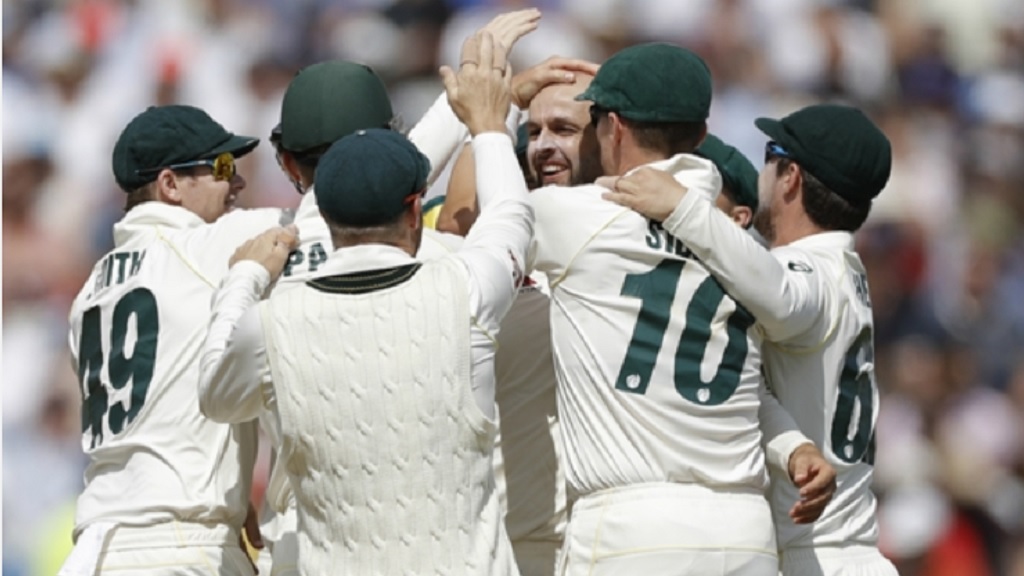 Australia completed a resounding 251-run victory on day five to seal the opening Ashes Test as Nathan Lyon tormented sorry England with a sublime six-for at Edgbaston as they were bowled out for 146.

The heroics of centurions Steve Smith and Matthew Wade a day previous set England a near-impossible 398 target and their only realistic chance of avoiding defeat was to bat out the day for a draw.

But predictions that a wearing day-five pitch would be suited to the spinning skills of Lyon bore fruit and he finished with 6-49, becoming the fourth Australian to rack up 350 Test wickets in the process.

Pat Cummins added 4-32 and now has 100 Test wickets as England played like the proverbial deer in the headlights to fall behind in the five-match series.

The inquest will now begin for England, who had Australia at 122-8 in the first innings before the first of Smith's centuries brought the tourists back into the match.

Even still, England held a 90-run lead heading into the second innings but their inability to remove Smith proved costly in an enthralling contest and the Australians now have the psychological edge with their star batsman in phenomenal form.

Tim Paine's side head to Lord's with a 1-0 lead having ended an 18-year wait for an Edgbaston win in any format, while it marks just England's second defeat in 15 Test matches at the venue.

England would have been relatively content with the opening hour despite the loss of first-innings centurion Rory Burns (11) when a short one from Cummins was gloved to Lyon at gully.

Jason Roy (28) and Joe Root made 41 for the second wicket, only for the former to make a complete hash of attacking a Lyon delivery that turned through the gap.

Lyon quickly added Joe Denly (11), who wastefully reviewed when there was clearly a nick on a looped one to Cameron Bancroft at short leg, and the same combination snared the crucial wicket of Root – who England really needed to bat most of the day – with the fielder snaffling a sharp take.

It left England 85-4 by lunch and the situation did not improve in the afternoon session, Cummins ripping up Jos Buttler's off stump before Jonny Bairstow gloved the same man to the slips.

When Ben Stokes edged Lyon behind to gleeful Australia captain Paine the writing was on the wall.

Chris Woakes tried to delay the inevitable with an enterprising 37, but the out-of-sorts Moeen Ali and Stuart Broad had no answer to Lyon and Cummins accounted for Woakes with a short delivery to bring an end to proceedings.

Lyon joined an elite club when it comes to Test scalps for Australia - only Shane Warne, Glenn McGrath and Dennis Lillee have also made it to 350.

All the focus pre-match was on the tourists' pace attack and which options they may use to try and cut down England. While the trio selected played their part throughout the Test, it was instead the one frontline spin bowler who was left to take centre stage on a worn surface.

STICK OR TWIST? NEITHER HELP OUT ENGLAND

The home side must be wondering where it all went wrong, having reduced Australia to 122-8 on the opening day. Coming to the ground on Monday, they always faced a tough order to survive and keep the series level heading to Lord's.

Their top-order batsmen attempted different methods to cope with Lyon, though none worked for a sustained period. Roy's adventurous march down the pitch will draw criticism, but even the reliable Root succumbed when choosing the more defensive approach. With issues over the form and fitness of key players, England's selectors have plenty to ponder in the break between games.

MOMENT OF THE DAY

The longevity of Root's innings was always likely to be crucial to England's chances of survival. But the skipper was sent on his way after a fine pouch by Bancroft shortly before lunch. Had Root managed to hold on England may have still maintained some hope of a draw, but Australia's celebrations told a story in itself.

- Lyon has become only the seventh spinner ever to record 350 Test wickets.
- Cummins has now taken 100 Test wickets (21 matches); no Australian bowler has got there faster since 1937 (Bill O'Reilly - 20).
- No bowler has dismissed Root more often in Tests than Lyon (five).
- Denly has scored more than 23 just once in eight Test innings for England.
- Buttler has failed to score more than five runs in four of his eight Test innings in 2019.

Ashes 2019: England paceman Anderson out of 2nd Test against Australia