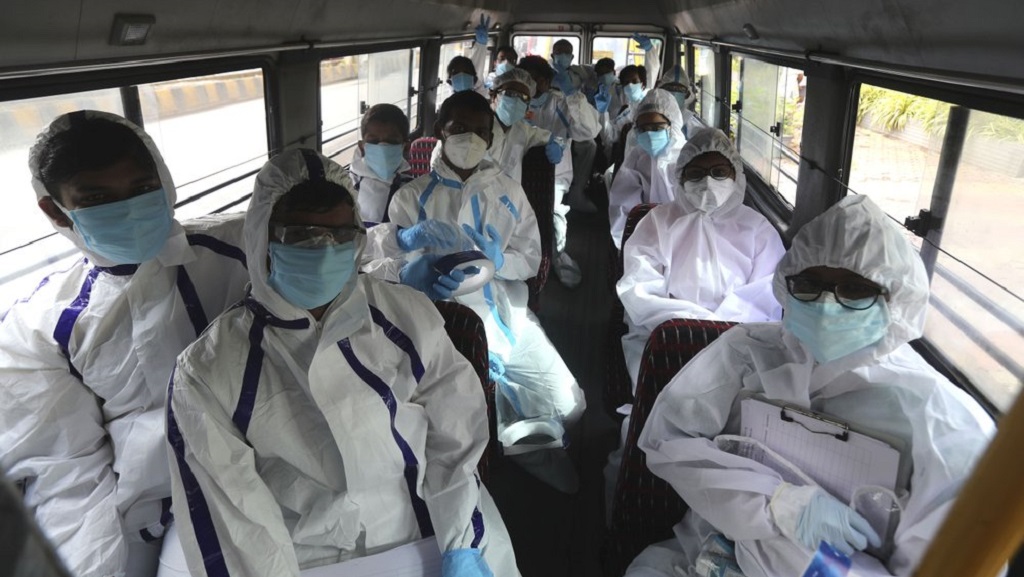 Health workers arrive on a bus to conduct a free medical checkup at residential building in Mumbai, India, Thursday, July 2, 2020. Indian Prime Minister Narendra Modi said in a live address Tuesday that the country's coronavirus death rate is under control, but that the country is at a "critical juncture." But since the lockdown was lifted, the caseload has shot up, making India the world's fourth-worst affected country. (AP Photo/Rafiq Maqbool)

India's number of coronavirus cases passed 600,000 on Thursday with the nation's infection curve rising and its testing capacity being increased.

A total of 17,834 people have died so far due to the virus, according to India's Health Ministry.

More than 60 percent of the cases are in the worst-hit Maharashtra state, Tamil Nadu state, and the capital territory of New Delhi.

However, the western beach of state of Goa, a popular backpacking destination, opened for tourism on Thursday with the state government allowing 250 hotels to reopen after more than three months. Tourists will either have to carry COVID-19 negative certificates or get tested on arrival.

The state has reported 1,387 positive cases with four deaths.

Many industries and businesses have reopened since the country eased its strict lockdown in early June, and Indians have cautiously returned to the streets. Schools, colleges and movie theatres remain shuttered.

Prime Minister Narendra Modi said in a live address Tuesday that the death rate is under control but the country is at a "critical juncture." He urged more stringent enforcement of distancing and other health guidelines.

The Health Ministry said testing has been ramped up to more than 200,000 every day, with 8.8 million test conducted so far. The recovery rate is 59.43 percent.

In other developments around the Asia-Pacific region:

— Tokyo Gov. Yuriko Koike warned Thursday that the spread of the coronavirus is beginning to accelerate again in Japan's capital as daily confirmed new infections jumped to a two-month high of 107.

She urged residents to take more precautions and stay away from nightlife districts. Thursday's rise in new cases spiked from 67 the day before and is the highest since 154 on May 2, when Japan was under a state of emergency for the pandemic.

The number tripled from 31 in just over a week. Tokyo now has 6,399 cases with 325 deaths, accounting for about one-third of Japan's national total. Koike said, however, that she has no plans to ask for business closures across Tokyo.

"Nobody wants to go back to that situation," she said. "We are now in the phase of living with the coronavirus. Our policy is to balance the economy and social activity with disease prevention." The majority of recent cases were younger people in their 20s and 30s, and about 40 percent were linked to nightlife establishments, Koike said.

— A coronavirus outbreak in Australia's second-largest city continued to grow, and the Northern Territory detected its first case in three months.

The man from the Northern Territory had travelled overseas and stayed in the virus hot spot of Melbourne recently. The territory's health minister did not say whether the man was likely infected in Melbourne or overseas. Most of Melbourne's 77 latest cases were in suburbs that were put under a one-month lockdown Wednesday night.

— The Philippine government is shifting defence spending and putting on hold military modernization projects to help finance the response to COVID-19. Defense Secretary Delfin Lorenzana told a news forum that $260 million from his department's budget was shifted to the pandemic campaign.

Defence spokesman Arsenio Andolong told The Associated Press the country's military modernization program may be set back by up to three years after its annual allocation was also slashed by $348 million, which will be used to fight the virus.

It's a tough balancing act for a country with a surfeit of security concerns, including Muslim and communist insurgencies and South China Sea territorial conflicts. Its coronavirus cases exceed 38,500, including 1, 270 deaths.

— South Korea reported 54 new cases as the virus continues to spread beyond the capital area and reach cities like Gwangju, which has shut schools and tightened social restrictions after dozens were found infected this week.

Health Minister Park Neung-hoo during a virus meeting expressed alarm over the rise of infections in Gwangju, which had one of the smallest caseloads among major South Korean cities before this week. Park urged the city's residents to refrain from unnecessary gatherings, maintain distance from others and wear masks.

— China reported three new cases of coronavirus, including just one case of local transmission in the capital Beijing, appearing to put the country where the virus was first detected late last year on course to eradicating it domestically, at least temporarily.

The other two cases were brought from outside the country, according to the National Health Commission. China credits strict quarantine, social distancing and case tracing policies with reducing its cases.

Masks are required for entry into many buildings, sometimes along with proof on a mobile phone app that the person is healthy.

David Clark had earlier described himself as an "idiot" for breaking the nation's lockdown measures and then last week appeared to blame a beloved health official for border lapses, generating an angry response from the public. Clark said he was becoming a distraction from the country's virus response.