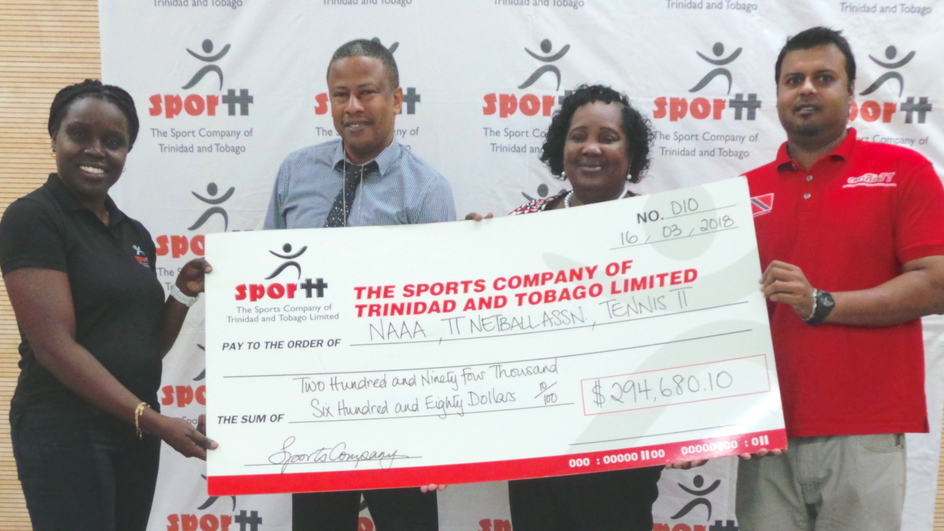 Three National Governing Bodies (NGBs) received a total of $294,680.10 on Friday towards the participation of national athletes, teams and coaches at various events. The funding is part of the Sports Company of Trinidad & Tobago’s disbursement of subventions to NGBs, who are required to submit the relevant justifications in an annual operational plan.

The Trinidad and Tobago Tennis Association (TennisTT) is being represented by three athletes at the World Junior Tennis tournament, currently ongoing in Guatemala. Aidan Carter, the 2018 Tranquility Tennis champion is among the World Juniors participants and is expected to take part in the ITF/Cotecc Trinity Cup, also being hosted in Trinidad and Tobago from 6-14 April at the National Racquet Sport Centre in Tacarigua. According to TennisTT Treasurer Dexter Mahase, “The organisation’s hosting of junior tournaments aligns with our focus on development. We are on a drive to raise the level of tennis while positioning Trinidad and Tobago as a regional hub for the sport.”

The Trinidad and Tobago Netball Association (TTNA) was represented at the cheque presentation by PRO Lynette Duncan who was appreciative of SporTT’s contribution of $89,012.00. “The funds will go towards our participation of the 17-member team at the 20th Jean Pierre Youth Netball tournament in St. Lucia this year. We are always proud to be a part of an event initiated by a national icon and are looking to return to winning ways, based on the new coaching staff we have brought on board.” Trinidad and Tobago last won the tournament when it hosted in 2006. The Jean Pierre Youth Netball tournament featured over 300 U16 girls from 16 countries and is the nursery for the sport in the region.

The country’s leading distance athlete Tonya Nero is on her way to the IAAF World Half Marathon in Valencia, Spain thanks to SporTT. Dexter Voisin, NAAA General Secretary said the event will serve as a warm-up and preparation for Nero’s first Commonwealth Games. Having qualified for the multi-sport event last year Voisin added, “Tonya told me that she wants to set a new national record at Commonwealth this year. She has been knocking at the door for some time and is well poised now to cement her place on the world stage.”

The NAAA received $37,246.60 towards the travel and accommodation for Tonya and her coach.

Trinidad Boxing Board of Control gets a new home

St Louis to captain T&T Women in friendlies versus Panama