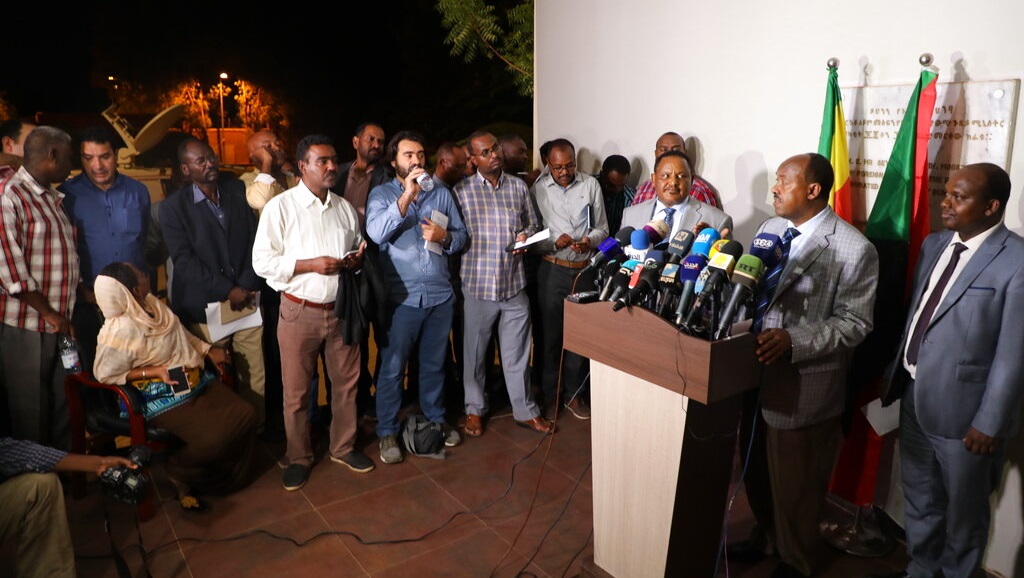 An African Union envoy was in Sudan on Thursday trying to mediate in the country's crisis as leaders of the protest movement accused the ruling military of pursuing a brutal crackdown on protesters.

Ethiopia and the U.S. have recently stepped up diplomatic efforts to ease the growing tensions, following the deadly dispersal last week by security forces of pro-democracy demonstrators' main protest sit-in in Khartoum. Over 100 people were killed in the capital and across Sudan in a sweeping crackdown, according to protest organizers.

The dispersal was an alarming turn in the standoff between the protesters and the military, which removed President Omar al-Bashir from power in April after a months-long popular uprising against his 30-year rule.

In the face of the deadly clampdown, the Forces for the Declaration of Freedom and Change, a coalition of political groups representing the protesters, called off their general strike and campaign of civil disobedience this week.

Ethiopia's Foreign Ministry said Wednesday the military council and leaders of the protest movement had agreed to resume their talks soon, "in good-faith to iron-out the remaining outstanding points," including setting up a government council to run Sudan during a transition period.

The statement added that all previous deals between the generals and the protest leaders, prior to the break in the talks, have been restored — including a three-year transition period, a Cabinet appointed by the protester leaders, and a legislative body with a civilian majority.

The ministry said both sides also agreed to refrain from inflammatory rhetoric and de-escalate tensions, and that the military council would to take confidence-building measures including the release of political prisoners.

There was no immediate confirmation from the protesters or the Sudanese military on the resumption of talks.

However, the Sudanese Professionals Association issued a strongly-worded statement Thursday accusing the security forces of arresting, firing at and intimidating workers who participated in the general strike.

The association claimed the military had threatened to evacuate government-owned residential apartment buildings to force strikers to go to work. Owners of private businesses faced similar threats, it added.

"We will work with our people on exposing the perpetrators of these crimes, which are no less serious than crimes of dispersing sit-ins and confronting rallies with bullets and tear gas," the SPA said.

Later Thursday, AU envoy to Sudan, Mohamed Labbat, was expected to brief the media on his mediation efforts.