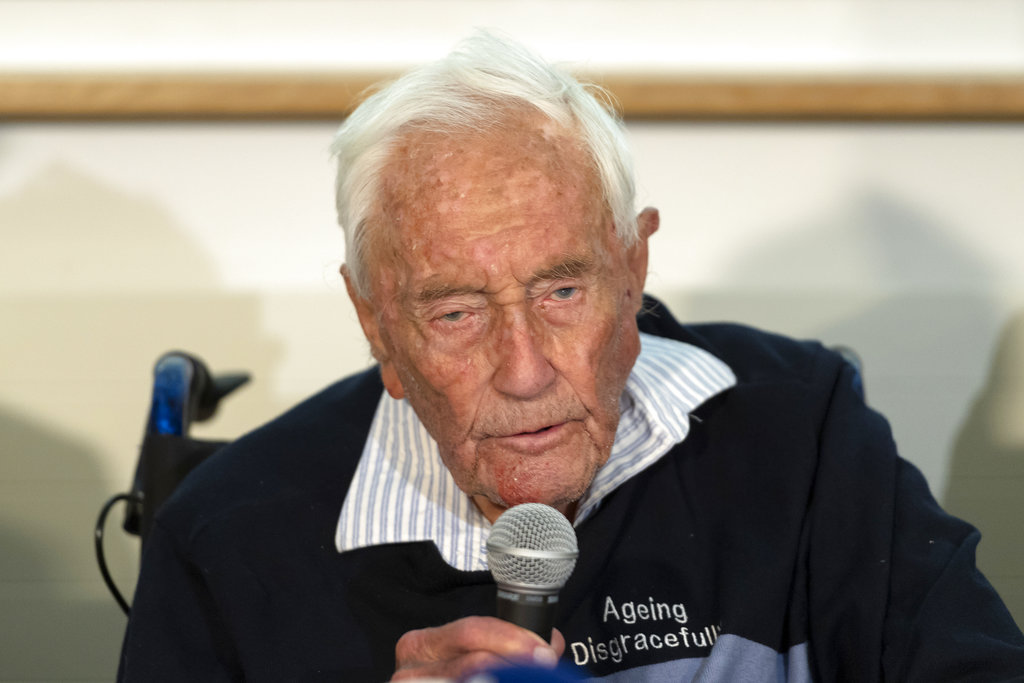 104-year-old Australian scientist David Goodall speaks during a press conference a day before his assisted suicide in Basel, Switzerland. (Georgios Kefalas/Keystone via AP)

A 104-year-old Australian biologist ended his life in Switzerland on Thursday, a right-to-die group said. The British-born scientist, David Goodall, said his life had been "rather poor" recently and he was happy to end it.

Philipp Nitschke, director of Exit International, said Goodall was declared dead at 12:30 p.m. in Liestal, a town outside the city of Basel, where he had traveled to take advantage of Switzerland's assisted-suicide laws.

The British-born scientist, described by Exit International as its first member, said this week that he had been contemplating the idea of suicide for about 20 years, but only started thinking about it for himself after his quality of life deteriorated over the last year.

He cited a lack of mobility, doctor's restrictions and an Australian law prohibiting him from taking his own life among his complaints, but he was not ill.

Assisted suicide is legal in Switzerland, but frowned upon by many doctors and some others who say it should be reserved for the terminally ill. Goodall's supporters want the practice to be more accepted as a legitimate choice for elderly people in sound mind.

Hundreds of people — some far more frail than Goodall, who used a wheelchair — travel to Switzerland every year to take their lives. The best-known group to help foreigners end their days in the Alpine country is Dignitas, but others include Life Circle in Basel, Goodall's choice.

Speaking Thursday in the room where he later died, Goodall said: "My life has been rather poor for the last year or so. And I'm very happy to end it."

Goodall took his life with an intravenous drip of pentobarbital, a chemical often used as an anesthetic but which is lethal in excessive doses.

Nitschke said, before activating the drip, Goodall had to answer "several questions so he knew who he was, where he was and what he was about to do."

"He answered those questions with great clarity, activated the process" while music played in the background, he added.

His last words before losing consciousness were "this is taking an awfully long time," Nitschke said, but "he died shortly thereafter."