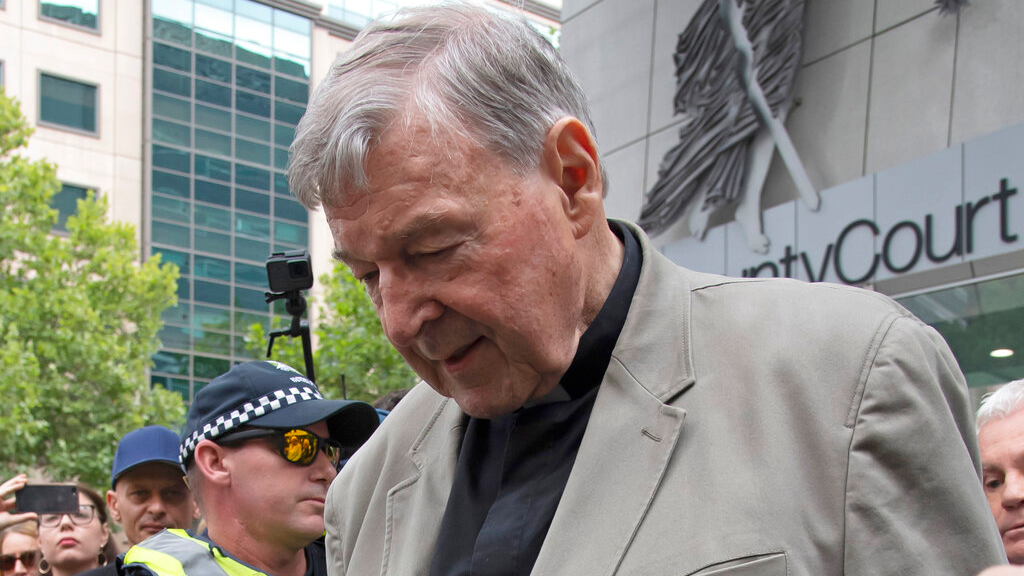 Cardinal George Pell leaves the County Court in Melbourne, Australia, Tuesday, Feb. 26, 2019. The most senior Catholic cleric ever charged with child sex abuse has been convicted of molesting two choirboys moments after celebrating Mass, dealing a new blow to the Catholic hierarchy's credibility after a year of global revelations of abuse and cover-up. (AP Photo/Andy Brownbill)

The most senior Catholic cleric ever charged with child sex abuse has been convicted of molesting two choirboys moments after celebrating Mass, dealing a new blow to the Catholic hierarchy's credibility after a year of global revelations of abuse and cover-up.

Cardinal George Pell, Pope Francis' top financial adviser and the Vatican's economy minister, bowed his head but then regained his composure as the 12-member jury delivered unanimous verdicts in the Victoria state County Court on Dec. 11 after more than two days of deliberation.

The court had until Tuesday forbidden publication of any details about the trial.

Pell faces a potential maximum 50-year prison term after a sentencing hearing that begins on Wednesday. He lodged an appeal last week of the convictions.

Details of the trial had been suppressed because until Tuesday, Pell had faced a second trial in April on charges that he indecently assaulted two boys aged 9 or 10 and 11 or 12 as a young priest in the late 1970s in a public pool in his hometown of Ballarat.

Prosecutor Fran Dalziel told the court on Tuesday that the Ballarat charges had been dropped and asked for the suppression order to be lifted. The move came days after a judge ruled out two key prosecution witnesses in the Ballarat case.

Acting Holy See spokesman Alessandro Gisotti read a statement to reporters Tuesday at the Vatican, saying Pope Francis has confirmed "precautionary measures" already taken against Pell, including a ban on his saying Mass in public and "as is the rule, contact in any way or form with minors."

The victim who testified at Pell's trial said after the conviction was revealed that he has experienced "shame, loneliness, depression and struggle." In his statement, the man said it had taken him years to understand the impact the assault had on his life.

Lawyer Lisa Flynn said the father of the second victim, who died of a heroin overdose in 2014 at the age of 31, is planning to sue the church or Pell individually once the appeal is resolved.

Pell was surrounded by a crush of cameras and members of the public as he was ushered from the courthouse to a waiting car. "You're a monster!" one man shouted. "You're going to burn in hell, you freak!"

"Are you sorry?" one woman shouted. Pell did not respond.

Another of Pell's lawyers, Paul Galbally, said Pell continued to maintain his innocence.

The revelations came in the same month that the Vatican announced Francis approved the expulsion from the priesthood of a former high-ranking American cardinal, Theodore McCarrick, for sexual abuse of minors and adults.

The convictions were also confirmed days after Francis concluded his extraordinary summit of Catholic leaders summoned to Rome for a tutorial on preventing clergy sexual abuse and protecting children from predator priests.

Australia's ranking bishop, Mark Coleridge, who delivered the homily at the final Mass of the summit, said Pell's convictions "shocked many across Australia and around the world, including the Catholic Bishops of Australia."

"The bishops agree that everyone should be equal under the law and we respect the Australian legal system," said Coleridge, who is president of the Australian Catholic Bishops Conference.

The lifting of the suppression order was welcomed by SNAP, a U.S. support group for victim of clergy abuse.

"We hope that his conviction will not only bring healing to his victims in Australia but hope to survivors across the world who are yearning for accountability at the top levels of the church," SNAP said in a statement. "We believe (the) conviction will make Australian children safer and parents and parishioners better informed about how to prevent sexual abuse."

The jury convicted Pell of abusing two boys whom he had caught swigging sacramental wine in a rear room of Melbourne's St. Patrick's Cathedral in late 1996, as hundreds of worshippers were streaming out of Sunday services.

Pell, now 77 but 55 at the time, had just been named the most senior Catholic in Australia's second-largest city, Melbourne.

The boys were both 13 years old. The jury also found Pell guilty of indecently assaulting one of the boys in a corridor more than a month later.

Pell had maintained his innocence throughout, describing the accusations as "vile and disgusting conduct."

Pell's lawyer, Robert Richter, had told the jury that only a "mad man" would take the risk of abusing boys in such a public place. He said it was "laughable" that Pell would have been able to expose his penis and force the victim to take it in his mouth, given the cumbersome robes he was wearing.

Both he and Chief Judge Peter Kidd urged the jury of eight men and four women not to punish Pell for all the failings of the Catholic Church, which in Australia have been staggering.

Along with Ireland and the U.S., Australia has been devastated by the impact of the clerical abuse scandal, with a Royal Commission inquiry finding that 4,444 people reported they had been abused at more than 1,000 Catholic institutions across Australia between 1980 and 2015.

As a result, Pell's trial amounted to something of a reckoning for survivors, with the brash and towering cardinal becoming the poster child for all that went wrong with the way the Catholic Church handled the scandal.

The conviction capped a year that had been so dominated by revelations of high-ranking sex abuse and cover-up that analysts openly speak of a crisis unparalleled since the Reformation. In addition to Pell, the allegations against McCarrick of groping a minor in the 1970s and of sleeping with adult seminarians became public.

As a result of the scandal, Francis' approval ratings have tanked in the United States, and his standing with conservative Catholics around the world has plunged.

When the jury chairman delivered the first guilty verdict, Pell's hands slipped from the arm rests of the chair where he sat in the dock at the back of the courtroom. His head bowed after the second verdict, but he restored his composure for the final verdicts.

Pell, who walked to and from court throughout his monthlong trial with a crutch under his right arm, was released on bail to undergo surgical knee replacements in Sydney on Dec. 14.

The first four offenses occurred at the first or second Solemn Mass that Archbishop Pell celebrated as leader of the magnificent blue-stone century-old cathedral in the center of Melbourne. Pell was wearing his full robes — though not his staff or pointed bishops' hat — at the time.

The other victim died of a heroin overdose in 2014 without ever complaining of the abuse, and even denying to his suspicious mother that he had been molested while he was part of the choir.

Neither boy can now be identified, because it is illegal to name victims of sexual assault in Victoria state.

Pell was initially charged with orally raping the second boy. But that charge was downgraded to indecent assault when the victim who testified said that he couldn't see the other's boy mouth at that moment from his vantage point.

More than a month later, the complainant testified that Pell pushed him against a cathedral corridor wall after a Mass and squeezed the boy's genitals painfully before walking away in silence.

The complainant testified that he feared that making such accusations against a powerful church man would cost him his place in the choir and with it his scholarship to prestigious St. Kevin's College.

He did not testify at his trial. But the jury saw a video recording of an interview he gave Australian detectives in Rome in 2016 in which he stridently denied the allegations.

Pell grimaced, appearing incredulous and distressed, waved his arms over his head and muttered to himself as the detectives detailed the accusations that his victim had leveled against him a year earlier.

"The allegations involve vile and disgusting conduct contrary to everything I hold dear and contrary to the explicit teachings of the church which I have spent my life representing," Pell told police.

Richter told the jury that the prosecution case compounded a series of improbabilities and impossibilities.

He told the jury that Pell could not have "parted" his robes as the complainant had described.

The jury was handed the actual cumbersome robes Pell wore as archbishop.

More than 20 witnesses, including clerics, choristers and altar servers, testified during the trial. None recalled ever seeing the complainant and the other victim break from a procession of choristers, altar servers and clerics to go to the back room.

The complainant testified that he and his friend had run from the procession and back into the cathedral through a side door to, as Prosecutor Mark Gibson said, "have some fun."

Monsignor Charles Portelli, who was the cathedral's master of ceremonies in the 1990s, testified that he was always with Pell after Mass to help him disrobe in the sacristy.

The defense argued that Pell's usual practice was to linger at the cathedral front steps talking to members of the congregation after Mass. But Gibson said there was evidence that Pell didn't always chat outside and had the opportunity to commit the crimes.

The lifting of the gag order comes after Francis charted a new course for the Catholic Church to confront clergy sexual abuse and cover-up, a scandal that has consumed his papacy and threatens the credibility of the Catholic hierarchy at large.

Opening a first-ever Vatican summit on preventing abuse, Francis warned 190 bishops and religious superiors last week that their flocks were demanding concrete action, not just words, to punish predator priests and keep children safe. He offered them 21 proposals to consider going forward, some of them obvious and easy to adopt, others requiring new laws.

But Francis went into the meeting even more weakened and discredited after one of his top advisers was convicted of the very crime he has now decided is worth fighting on a universal scale.