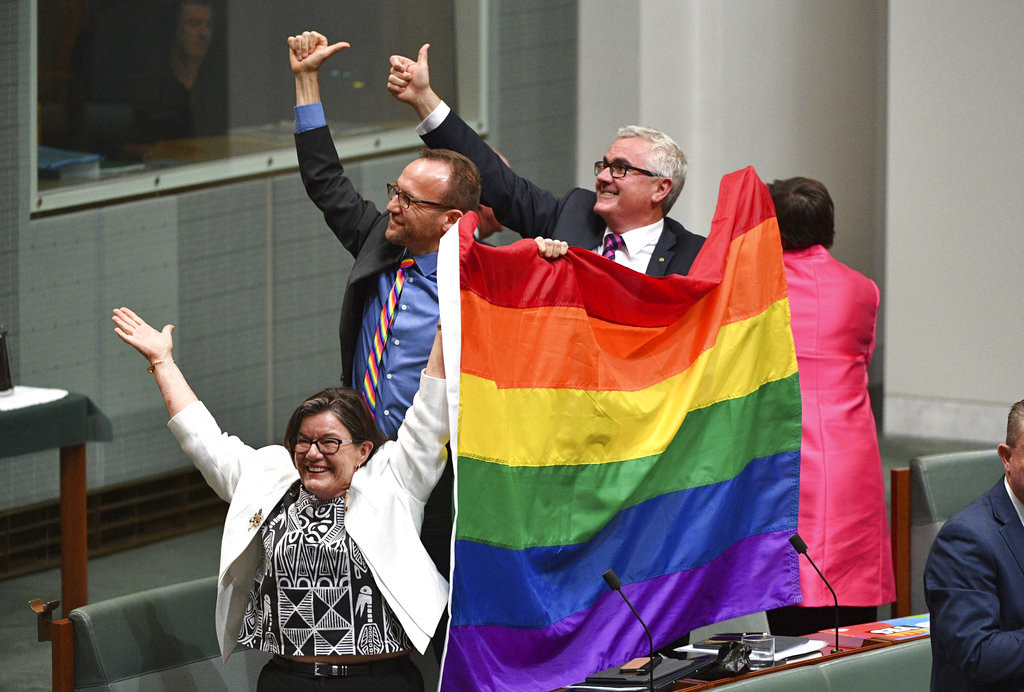 Members of parliament, from left, Cathy McGowan, Adam Brandt and Andrew Wilkie celebrate the passing of the Marriage Amendment Bill in the House of Representatives at Parliament House. (Mick Tsikas/AAP Image via AP)

The public gallery in the House of Representatives erupted with applause when the bill passed. It changes the definition of marriage from solely between a man and a woman to "a union of two people" excluding all others. The legislation passed with a majority that wasn't challenged, although five lawmakers registered their opposition.

The Senate passed the same legislation last week 43 votes to 12. After royal assent and other formalities, the law will likely take effect in about a month, with the first weddings expected about a month later.

Champagne and tears of flowed in the halls of Parliament House as gay celebrities including Olympic champion swimmer Ian Thorpe and actress Magda Szubanski hugged lawmakers and ordinary folk in a party atmosphere.

"What an amazing day, I'm a little bit delirious, it's extraordinary," said Szubanski, who sat in the public gallery during Thursday's daylong debate.

"Quite literally without them voting for us, this would never have happened," Thorpe said.

"It means that we've created an Australia that is more equitable, it's more fair, it's more just," he added.

Amendments meant to safeguard freedoms of speech and religion for gay-marriage opponents were all rejected, though those issues may be considered later. The government has appointed a panel to examine how to safeguard religious freedoms once gay marriage is a reality in Australia.

Lawmakers advocating marriage equality had argued that the national postal survey in November mandated a change of the marriage definition alone, so changing the law should not be delayed by other considerations.

Gay marriage was endorsed by 62 percent of voters who responded to the postal ballot.

"It is now our job as members of Parliament to pass a fair bill that does not extend or create any new discriminations," an emotional government lawmaker Warren Entsch, who helped draft the bill, told Parliament. "It is a strong bill that already strikes the right balance between equality and freedom of religion."

"It's an historic day for Australia today and I think the celebrations around the country when we finally ... achieve marriage equality are going to be immense," Janet Rice said before the vote. Rice is a minor Greens party senator who was only able to remain married to her transgender wife of 31 years, Penny, because Penny remained listed as male on her birth certificate.

Penny Wong, an opposition Labor Party senator who has two children with her lesbian partner, said, "I am feeling happy."

Most gay rights advocates believed the government should have allowed marriages years ago and saw various ideas for a public survey as a delaying tactic. The U.N. Human Rights Committee had called the ballot survey "an unnecessary and divisive public opinion poll."

Existing civil celebrants can also refuse to officiate at gay weddings, but celebrants registered after gay marriage becomes law would not be exempt from anti-discrimination laws.

One of the rejected amendments would have ensured Australians could speak freely about their traditional views of marriage without fear of legal action. It was proposed by Attorney-General George Brandis and supported by Prime Minister Malcolm Turnbull, both gay marriage supporters.

Former Prime Minister Tony Abbott, who was a high-profile advocate of traditional marriage, told Parliament that Turnbull and opposition leader Bill Shorten had failed to deliver detailed protections for freedoms of speech, conscience and religion in the bill.

"A promise was made by the leaders of this Parliament and the promise has not adequately been delivered on," Abbott said.

Abbott pointed to an Australian teenager who lost her job for advocating against gay marriage on social media and an Australian Catholic bishop who was taken before a state anti-discrimination tribunal over a pamphlet he published extolling traditional marriage. The complaint against the bishop was dropped.

"The last thing we should want to do is to subject Australians to new forms of discrimination in place of old ones that are rightly gone," he said.

Government lawmaker Trevor Evans ruled out an Australian equivalent of the U.S. Supreme Court case in which a baker who refused to provide a wedding cake for a gay couple argued he was exercising artistic freedom and was exempt from Colorado anti-discrimination laws.

"Let's be honest here, for a case like that to arise in Australia, it would require a gay couple who care more about activism than about the success of their own wedding, to find a business operator who cares more about religious doctrine than the commercial success of their own small business, and for both of them to commit to having a fight," Evans told Parliament.

"Typical Australians would genuinely question the bona fides of the players in a case like that and the slim prospects of that occurring doesn't warrant the pages and pages of commentary and debate that have been dedicated to it," he added.

Several gay marriage opponents in Turnbull's conservative coalition have regarded marriage equality as inevitable and have welcomed an end to an issue that has long divided the government ranks.

Finance Minister Mathias Cormann, a same-sex marriage opponent who oversaw the postal ballot, said he felt "great satisfaction" that the issue was resolved.

"It was a polarizing issue on which good Australians had strongly and sincerely held views on both sides of the argument," Cormann said.

The result is a political win for Turnbull, who became prime minister after deposing Abbott in 2015 in an internal government leadership ballot.

Abbott was head-butted by a gay rights advocate during the postal survey campaign in September. Kevin Rudd, a center-left Labor Party prime minister whom Abbott defeated in elections in 2013, blamed the postal ballot for an assault on his 19-year-old godson as he campaigned for marriage equality a week earlier.

The law will likely take effect after a month. State laws then require couples to give 28 days' notice of their intention to marry, Croome said.