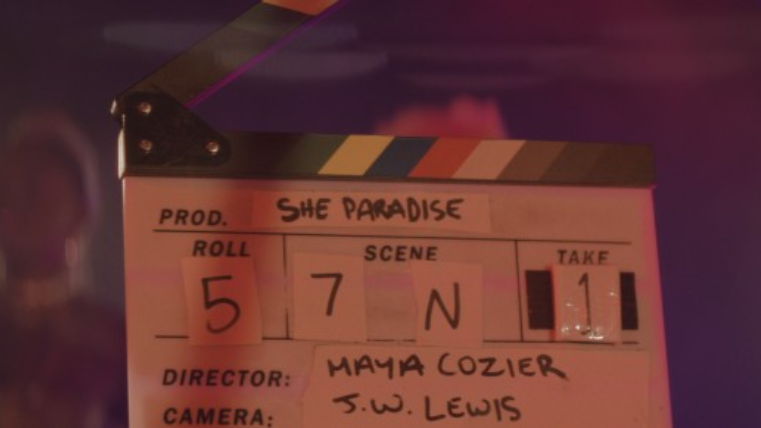 Following the success of her film short, "Short Drop", award-winning director Maya Cozier is back at it again, having just wrapped shooting on her latest project, "She Paradise."

"She Paradise" is a short film about a teenage girl whose world gets turned upside down when she meets a crew of soca backup dancers. The crew presents her with an opportunity for friendship and escape. Her first chance on stage becomes a night of difficult choices but also possibilities for an exciting new future.

As any artist would tell you, trying to put out a body of work isn't cheap and shooting a film is no different. She was able to subsidize production costs as a result of a small grant from the Ministry of Community Development Culture and the Arts as well support from major brands including MAC cosmetics, MUA House, Vemco, Vembev, Carib, Punchy Punch and Blue Waters.

However, that's just half the battle. Post-production costs can run pretty high and Cozier has launched an Indiegogo campaign to help complete the film, and in turn, submit to numerous film festivals.

The funds raised from the Indiegogo campaign will cover editing, colour correction, sound design and festival submissions. Maya stopped by our studio to tell us more about her film and her Indiegogo campaign, which has already reached just over half of her US$10,000 goal.

Contributions are flexible and can start as low as US$5; in exchange for each valued contribution, donors can receive a variety of items including signed movie posters, thank you credits, and the opportunity to preview "She Paradise".

To help back Maya's initiative, visit her campaign page on Indiegogo.

'Green Days by the River' to premiere in London