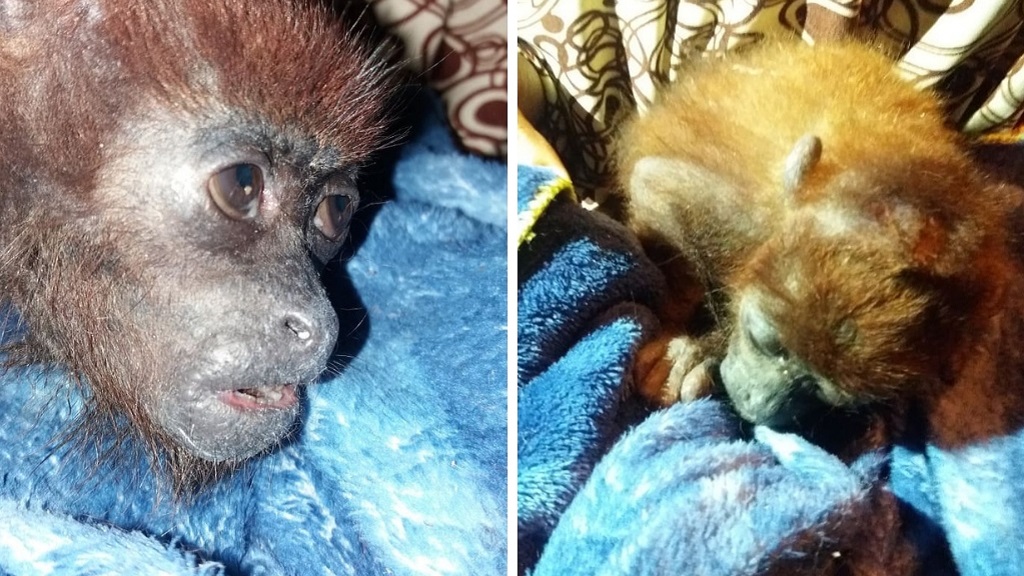 A baby Red Howley monkey which had probably been torn from its mother’s arms and sold into the illegal pet trade, was found by the roadside by rescuers, said Director of the El Socorro Centre for Wildlife Conservation, Ricardo Meade.

Sadly, the baby monkey, which was brought to the Centre after it was taken to a local vet, died despite efforts to save it.

Meade shared a post publicly to Facebook relating the incident and urging people not to support the illegal pet trade.

“The baby howler pictured was found at the side of the road in extremely poor condition as the pictures indicate.”

“It was weak, dehydrated, emaciated and severely underweight with bruising and scarring and fur missing all over its body.”

“Despite our best efforts this suffering animal did not last 24 hours,” he said.

Meade said someone may have tried to treat the animal as it had gentian violet, an antiseptic dye used for wounds, on its body.

He pointed to the animal’s eyes which showed the effect of the trauma it went through.

“Look at the pictures and see the pain and trauma that this non-human primate went through. Please do not attempt to keep these animals as pets.”

“They have a life span of 15 to 20 years but most die within months of being removed from their mothers,” he said.

Meade said these babies cannot survive without their mothers until they are weaned, so the likelihood is high that the baby’s mother was killed by poachers.

Meade said these animals are wild and are not suitable as pets.

“Many people believe that monkeys make great pets but that is indeed far from the truth. To get a baby monkey you must first kill the mother since they are inseparable from birth till weaning.”

“This orphaned baby will carry the trauma of the tragic loss of its mother for life and may cause violent reactions or stressful reactions to some situations.”

Many condemned the act and called for a stop to the illegal wildlife trade.

Malinda Cezair: "Lord help us as a people to love animals, treasure them and protect them. My heart is broken at these pics. RIP baby."

Ester Noronha: "So sad. His pain is over. Hope people will not keep them as pets need proper care N most of the people don't do that."

Sue Dookie: "This really hurts me. Animals were meant to live as the Lord intended. Free and wild for us to enjoy. Only despicable people would want as a pet any creature that's born in the wild."

Lutchman Jaisarie: "Don't know if ppl will ever stop this nonsense, leave these creatures alone, they killed the mother and now the baby, this is really heartbreaking."

Neesha Maharaj: "A lot of people have fooled themselves into believing if they put an animal in a cage they are caring for them....it is for your amusement not the animals welfare, leave them alone they have a life of their own."

Red Howler monkeys are native to Trinidad but are not currently found in Tobago – they are protected by law under the Conservation of Wildlife Act.

In February 2019, Minister of Agriculture, Land and Fisheries, Clarence Rambharat, said requests were made to have the Red Howler monkey declared an Environmentally Sensitive Species.

Once approved, anyone caught with a Red Howler Monkey would be liable to a fine of up to $100,000 and/or two years jail time.

The Guyanan Red Howler monkey (Alouatta macconnelli) is considered a vulnerable species according to the International Union for the Conservation of Nature (IUCN).

They are subject to threats including the removal of their habitats due to illegal logging, forest clearance for agriculture, as well as poaching.

According to a study done in 1996, in areas around wildlife sanctuaries in Trinidad, up to 85 percent of individuals interviewed admitted to eating or hunting monkeys for meat.

Government implemented stricter fines for poaching and other hunting offences with amendments made to the Conservation of Wildlife Act as follows: