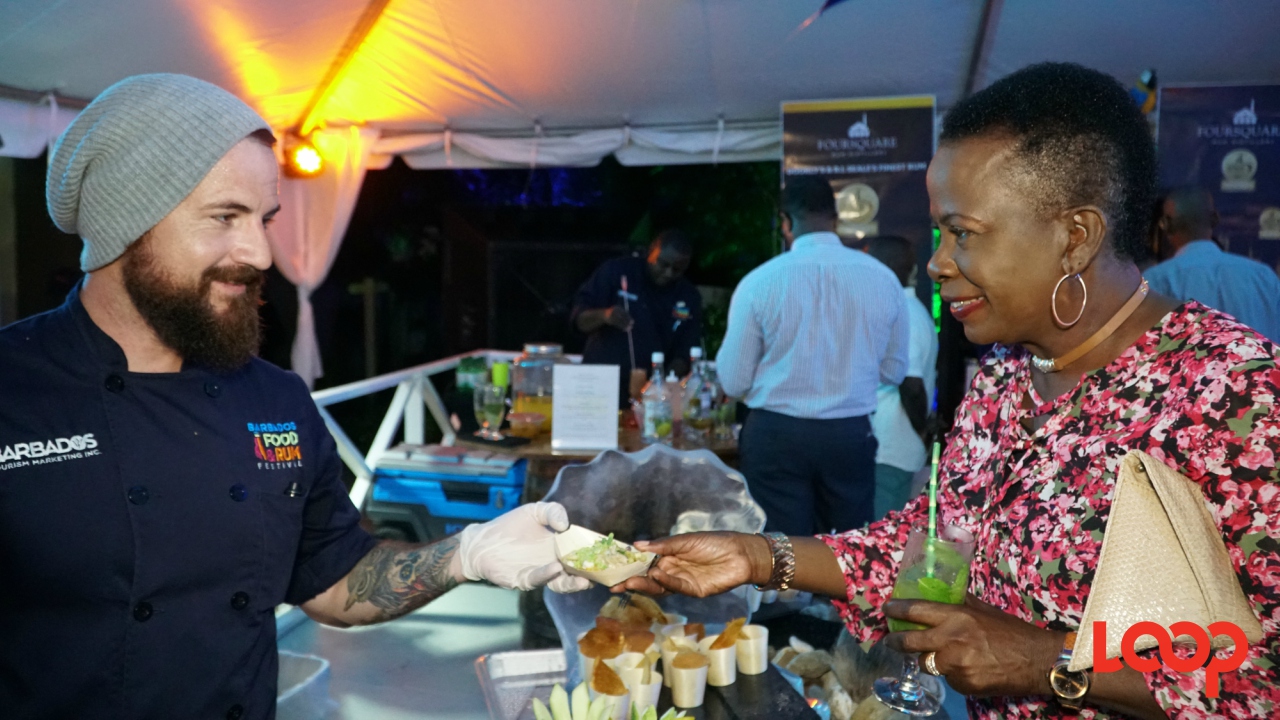 Chef Damian Leach serving one of his seafood dishes at the launch of the 2017 Barbados Food & Rum Festival. (PHOTO: Richard Grimes)

With local chefs and mixologists dominating the lineup for the 2017 Barbados Food and Rum Festival, it would appear the eight-year-old epicurean event has come of age.

So says Tourism Minister Richard Sealy, as he addressed fellow tourism officials, media personnel, event partners and other specially invited guests at the launch of the 2017 Festival, slated for November 16 – 19.

Chefs Damian Leach, Creig Greenidge, Michael Hinds, Michael Harrison, John Hazzard, Henderson Butcher and more, will be joined by mixologists such as Ryan Adamson and Jamaal Bowen to present “a celebration of Bajan flavour” over the four nights of activities.

Many of them have been top winners at the CHTA Taste of the Caribbean culinary competition.

“The headline chefs are mainly Barbadian and I think that is a sign of coming of age,” Sealy declared, adding, “That doesn’t take anything away from the international chefs.”

Chefs Tom Aikens, Chris de la Rosa and Jean-Georges Vongerichten are the international chefs set to spice things up at the festival.

The three chefs hail from Barbados’ top source markets and will be featured in the three-part Gourmet Safari dinner series at some of Barbados’ finest restaurants including The Cliff Restaurant, The Crane and The Tides.

The menu for the evening showcased local ingredients such as Black Belly sheep, marlin, dolphin, lobster and lionfish, all prepared in exciting ways to tantalise the palate. Traditional cocktails got a Bajan twist with tropical flavours such as mango, grapefruit and sorrel.

Meanwhile, CEO of the Barbados Tourism Marketing Inc., William ‘Billy’ Griffith, spoke about the successful rebrand of the festival in 2016.

“It was a strategic move to further enrich our focus on promoting the unique elements of Barbados, namely out claim to the birthplace of rum. We are pleased with how much the Festival has grown and how much attention it has attracted both here and abroad. Moving forward, we want to ensure that we’re creating not just unique experiences for visitors, but also a sustainable product that all Barbadians can feel invested in.

The 2017 Food and Rum Festival will feature a range of diverse culinary and cultural experiences including polo, a flotilla and beach party, and a night out in Oistins.

Barbados tops Taste of the Caribbean