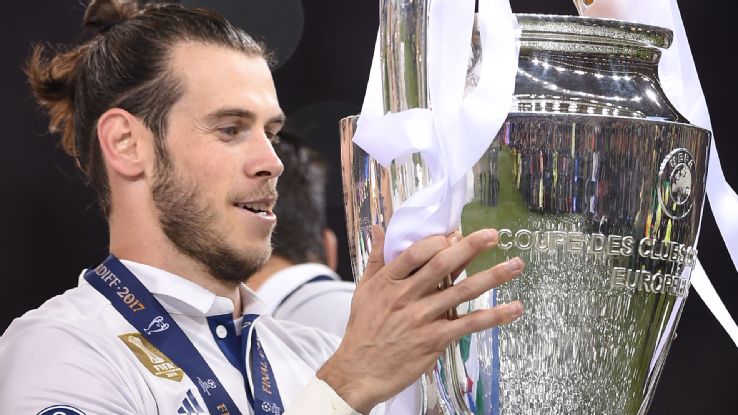 Gareth Bale says he is not interested in speculation linking him with a move away from Real Madrid in the transfer window.

The Wales international was a second-half substitute on Saturday as Madrid claimed their second Champions League triumph in as many seasons with a 4-1 win over Juventus in Cardiff.

Bale has struggled for regular starts under Zinedine Zidane this season due to a string of injury problems, prompting reports that he could leave Santiago Bernabeu.

Manchester United have been credited with a strong interest this week, with Atletico Madrid star Antoine Griezmann having confirmed that he will not join Jose Mourinho's side.

Bale, however, insists he is fully committed to Madrid and is revelling in a third winners' medal in Europe's top competition since he joined from Tottenham in 2013.

"I don't even read anything, so I don't know what to say," he said of the speculation. "I'm happy here, I signed a long-term deal last summer. So yes, three Champions Leagues in four seasons will do that.

"It's incredible, it's the reason I came to Real Madrid: to win trophies. And we're enjoying winning them at the moment.

"To play a final in your home city is incredible, but to win it is even better. So yes, an incredible occasion and great to experience.

"It's been difficult with my ankle this year. I obviously came back way too early from my surgery and I suffered a bit and obviously we were considering having more at one point. But I worked tirelessly hard to get back and to get ready for this game. So yes, just happy to get on for the last few minutes."

Madrid and Juve were level at 1-1 at half-time before a rousing second-half display from Zidane's side saw them cruise to victory.

"I think we just had to go for it," Bale said of their performance after the break. "But it's just one of those things, it's a game of two halves, it's always cagey in the final and at the end of the day we're happy with the win.

"As I said it's a very special moment for me. I don't think many players have won the Champions League in the home city [where] they were born. So it's a great memory to have."

Bale will have to watch on from the sidelines next week when Wales take on Serbia in World Cup qualifying, with the forward having picked up a one-game ban after being booked in the 0-0 draw with Republic of Ireland.

"It's very disappointing to be honest," he said. "I'll be cheering on the boys but I need to go on holiday and rest, and come back stronger next season.

"I've spoken to the boys already but I'm sure they'll be working hard and yes, I'll be watching and praying we get the three points."