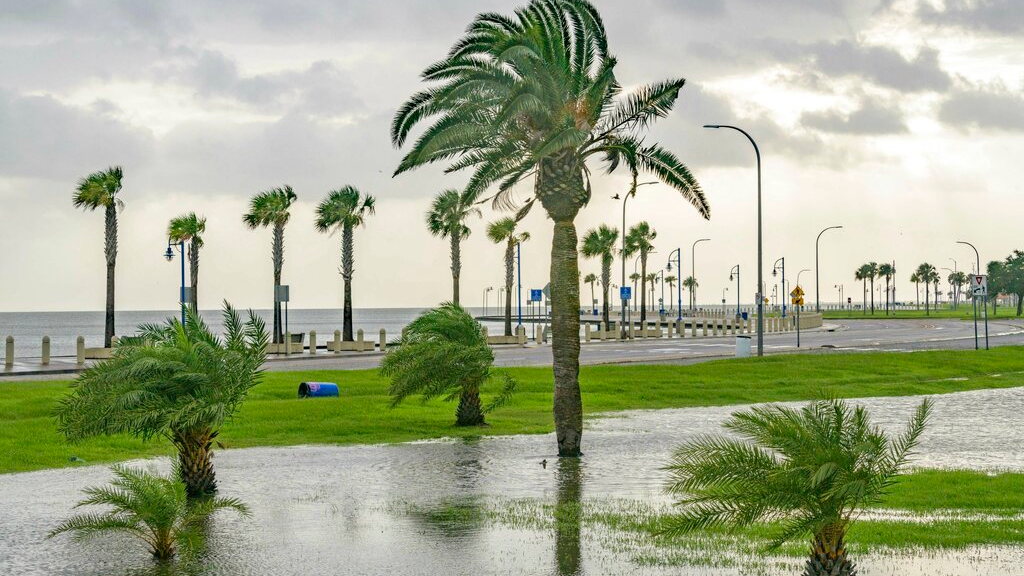 Wind blows through the trees as there is very little flooding from Lake Pontchartrain on Lakeshore Drive in New Orleans, Saturday, July 13, 2019 ahead of landfall of Tropical Storm Barry in the Gulf of Mexico. (AP Photo/Matthew Hinton)

Carrying "off the chart" amounts of moisture, sprawling Barry strengthened into a hurricane Saturday as it crawled slowly toward shore, knocking out power on the Gulf Coast and dumping heavy rains that could last for days in a test of flood-prevention efforts implemented after Hurricane Katrina devastated New Orleans 14 years ago.

The Coast Guard rescued more than a dozen people from the flooded remote island of Isle de Jean Charles, south of New Orleans, where water had risen so high that some residents were clinging to rooftops. But in the Big Easy, residents and tourists wandered calmly through mostly empty streets under a light rain.

Video showed water overtopping a levee in Plaquemines Parish, an area south of New Orleans where fingers of land extend deep into the Gulf of Mexico. Officials were still confident that New Orleans' levees would hold firm. The barriers range in height from about 20 feet to 25 feet (6 meters to 7.5 meters).

Barry had strengthened into a Category 1 hurricane by Saturday morning, with maximum sustained winds of 75 mph (120 kph), the National Hurricane Center said. Storms become hurricanes when their winds reach 74 mph (120 kph) or higher. Barry was expected to weaken again after reaching land and become a tropical depression on Sunday.

Officials predicted Barry would make landfall near Morgan City, west of New Orleans. The small town had an overnight curfew that expired Saturday morning, after on-and-off rain and power outages. People used cellphones to see in the dark, and opened doors and windows to let the warm, sticky tropical air circulate.

More than 70,000 customers were without power Saturday morning, including 66,830 in Louisiana and 3,140 in Mississippi, according to poweroutage.us.

Though expected to be a weak hurricane, Barry threatened disastrous flooding across a swath of the Gulf Coast. By Saturday morning, the storm system had gathered a "big slough of moisture," meaning "a lot of rain is on the way," said National Hurricane Center Director Ken Graham.

During a storm update through Facebook Live, Graham pointed to a computer screen showing a huge, swirling mess of airborne water. "That is just an amazing amount of moisture," he said. "That is off the chart."

The rains were hitting coastal Alabama and Mississippi the hardest.

Parts of Dauphin Island, a barrier island in Alabama 200 miles (322 kilometers) away from where Barry was headed, were flooded both by rain and surging water from the Gulf, said Mayor Jeff Collier, who was driving around in a Humvee to survey damage. He said the island still had power early Saturday afternoon and wind damage was minimal. The island is often affected by far-away storms, he said.

Barry was moving so slowly, it was likely that heavy rain would continue throughout the weekend, Graham said. There were predictions of 10 to 20 inches (25 to 50 centimeters) of rain through Sunday across a swath of Louisiana that includes New Orleans and Baton Rouge, with some parts of the state possibly getting 25 inches (63 centimeters). Looking ahead, tracking forecasts showed the storm moving toward Chicago, swelling the Mississippi River basin with water that must eventually flow south again.

Water was flowing over a "back levee" in Point Celeste in Plaquemines Parish, officials said in an automated telephone recording distributed to residents. The levee was not on the Mississippi River and there was no indication that the barrier was breached or broken or that major flooding was occurring, the recording said.

Officials said they were worried the water could close Highway 23, cutting off a key road and the rest of the parish to the south. Much of Plaquemines Parish had been under an evacuation order since Thursday.

Governors declared emergencies in Louisiana and Mississippi, and authorities took unprecedented precautions in closing floodgates and raising the barriers around New Orleans.

Gov. John Bel Edwards said it was the first time all floodgates were sealed in the New Orleans-area Hurricane Risk Reduction System since Katrina. Still, he said he didn't expect the Mississippi River to spill over the levees despite water levels already running high from spring rains and melting snow upstream.

There was one piece of good news: Late Friday night, forecasters said the Mississippi River was expected to crest in New Orleans at about 17.1 feet (5.2 meters) on Monday, not 19 feet (5.8 meters) as had been earlier predicted. The levees protecting the city range from about 20 to 25 feet (6 to 7.5 meters) in height.

On-again, off again rain hit New Orleans overnight. As day broke, streets in the normally raucous French Quarter tourist district were largely empty and barely damp. Street sweepers rambled by. It was breezy, but flags on balconies overhanging the empty streets still occasionally fell limp. A few cars were out on roads. Some nearby homes had piled sandbags outside their doors.

"So far it's been really nice. It's been cool. It's been a little breezy," said Wayne Wilkinson, out with his dog in the French Quarter. He welcomed the pre-storm respite from July's normal heat, but said he was mindful things could change: "I know we have to be on the alert."

Baton Rouge , which was devastated by floods in 2016 , was similarly quiet Saturday, with puddles left from overnight rains, wind shaking the trees and only a few cars and trucks on thoroughfare Interstate 10. In Alabama, rain pounded the eastern shore of Mobile Bay overnight, with scattered power outages in communities including Daphne, along Interstate 10.

Authorities told at least 10,000 people in exposed, low-lying areas along the Gulf Coast to leave, but no evacuations were ordered in New Orleans , where officials urged residents to "shelter in place."

Before they did, people packed stores to stock up on bottled water, food and other essentials.

Lifelong New Orleans resident Terrence Watkins grabbed supplies at a Costco. He said he has a few simple big-storm rules: "Stock up on water. Stock up food. Get ready for the storm — ride it out."