Besieged IS militants refuse to surrender, ask for an exit 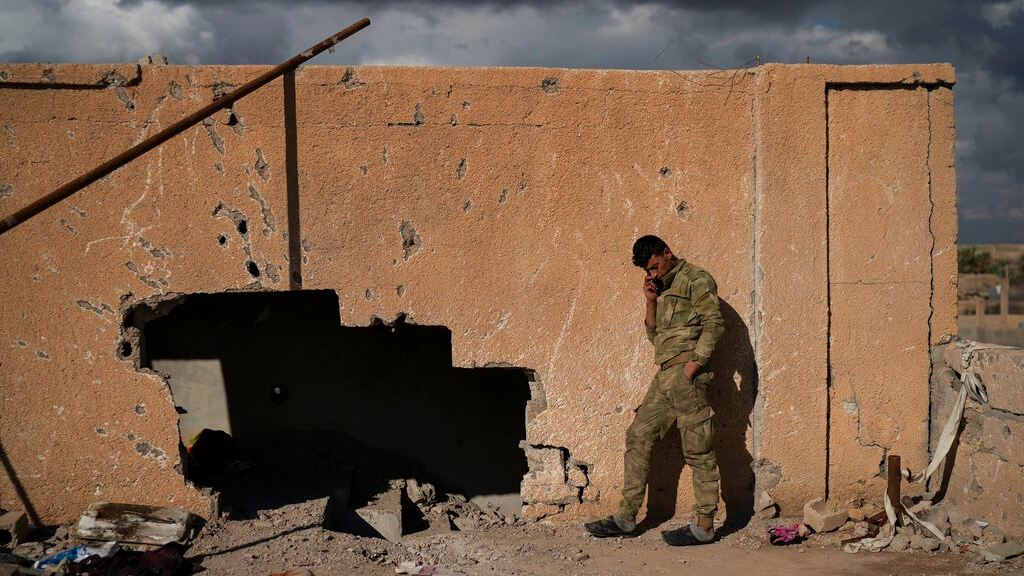 More than 300 Islamic State militants surrounded in a tiny area in eastern Syria are refusing to surrender to U.S.-backed Syrian forces and are trying to negotiate an exit, Syrian activists and a person close to the negotiations said Monday.

The development comes amid the Islamic State group's last stand in the village of Baghouz, where militants are hiding among hundreds of civilians and preventing them from leaving. It also will likely further delay a declaration on IS' territorial defeat that U.S.-backed Syrian forces were hoping to make last week.

A person familiar with the negotiations said the militants are asking for a corridor to the rebel-held northwestern province of Idlib, and demand that they be allowed to leave along with the evacuated civilians. He spoke on condition of anonymity because he was not authorized to speak about the talks, which he described as taking place indirectly.

It was not clear how the current standoff would be resolved.

The Britain-based Syrian Observatory for Human Rights, an activist group that monitors the civil war in Syria, said another request by IS to be evacuated to neighboring Iraq was also rejected. The group said that IS released Sunday 10 SDF fighters it had been holding, adding that it was not clear what, if anything, the extremists would get in return.

From a self-proclaimed caliphate that once spread across much of Syria and Iraq, the Islamic State group has been knocked back to a speck of land in Baghouz in Deir el-Zour province, on the countries' shared border.

In that tiny patch on the banks of the Euphrates River, the militants are holed up in what SDF officials described as a small tented village, atop a network of tunnels and caves with the civilians — some of them possibly hostages.

The SDF and the coalition have battled to uproot the militants from villages and towns on the eastern banks of the Euphrates since September.

The capture of the last pocket of IS territory in either Syria or Iraq would mark the end of a four-year global campaign to crush the extremist group's caliphate. It has been a long and destructive battle. In decline since 2016, the militant group was stripped of its self-declared capital of Raqqa, in Syria, in the summer of 2017, leaving behind a destroyed city whose residents are still struggling to return.

The DeirEzzor 24, an activist collective in eastern Syria, said several trucks loaded with foodstuff entered IS-held areas in Baghouz in Deir el-Zour on Monday morning. The group also reported that IS released 10 SDF fighters were released Sunday without saying whether the supplies of the foodstuff were in return for the release.

DeirEzzor 24 said that the truce reached between IS and the SDF last week has been extended for five more days as of Sunday. It added that in return several trucks loaded with food entered IS-held area on Sunday.