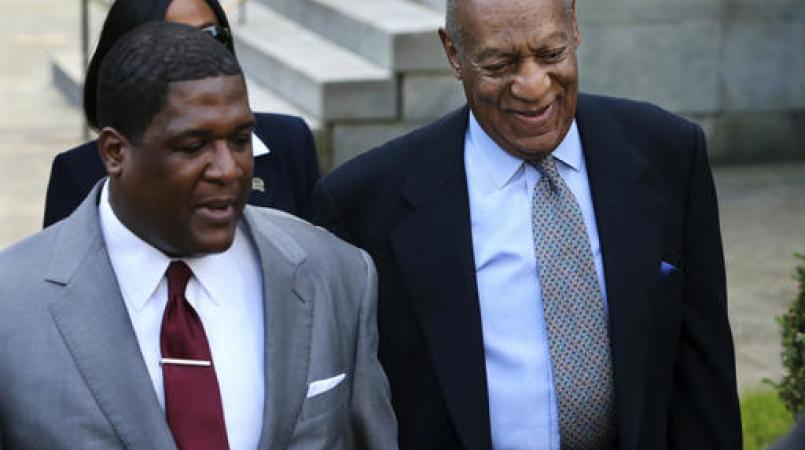 After a showdown over race, the jury picked to decide Bill Cosby's fate in the first big trial of the #MeToo era ended up mirroring the gender and racial makeup of the group that deadlocked last year: seven men and five women — 10 white, two black.

Cosby's lawyers alleged a member of the prosecution team made a disparaging remark after prosecutors rejected one of the few black women considered for the case. The defense, which argued nixing her was illegal, never revealed the remark they claim was said and eventually agreed to pick more jurors.

District Attorney Kevin Steele rejected the allegations, saying that prosecutors had no problem seating the two other black people who had appeared for individual questioning. He contended that Cosby's lawyers were playing to the media.

"There's absolutely no legitimacy to this," Steele said.

Both sides will return to court on Thursday to select six alternates.

The battle over the black juror's removal highlighted a vast racial disparity that limited the number of black people available for consideration in the suburban Philadelphia jury pool.

Just 10 of about 240 prospective jurors questioned on the first three days of jury selection were black, or about 4.2 percent. The black population in Montgomery County is about 9.6 percent black, according to the latest U.S. Census estimates.

The county says the names of people called for jury duty are selected randomly from a master list that combines voter registration records and driver's license records.

Two of the six black people in an initial group of 120 potential jurors were invited back for individual questioning and wound up getting picked for the jury. The woman rejected on Wednesday was the only black person to reach that stage.

The jury for Cosby's first trial was selected from about 300 miles (483 kilometers) away in the Pittsburgh area. The retrial jury is being picked from the same county where the 80-year-old Cosby is on trial on charges he drugged and molested a woman in 2004.

"This man faces the rest of his life in jail," lawyer Kathleen Bliss said, arguing Cosby, who is black, deserved to have more people on the jury who looked like him.

Cosby's lawyers had appeared ready to strike at the first instance of prosecutors blocking a black juror, producing a legal brief that argued the move violated a 32-year-old Supreme Court ruling that prohibits prosecutors from excluding prospective jurors because of their race. The defense had made the same argument on Tuesday regarding the prosecution's exclusion of several white men, but O'Neill rejected it.

Cosby has pleaded not guilty. He says the encounter with former Temple University women's basketball administrator Andrea Constand was consensual.

The retrial jury appeared to skew younger than the hung jury from last year's trial. Eight of the jurors picked this week are middle-aged men or women. The rest are millennials or on the cusp of middle-age.

Last year's panel included a man in his 80s who told reporters he was suspicious of Constand's story and suspected that "politics was involved" in reviving the decade-old case with "no stained clothing, no smoking gun, nothing."

The man, who spoke to The Associated Press on condition of anonymity due to the sensitivity of the deliberations, had insight into what jurors could be in for when they deliberate the charges.

"Crying by men and by women and more than one," he said. "And the tears came towards the end, it was so tense."

Prosecutors plan to call as many as five additional accusers in a bid to portray Cosby — the former TV star once revered as "America's Dad" for his family sitcom "The Cosby Show" — as a serial predator.

The AP does not typically identify people who say they are victims of sexual assault unless they grant permission, which Constand has done.