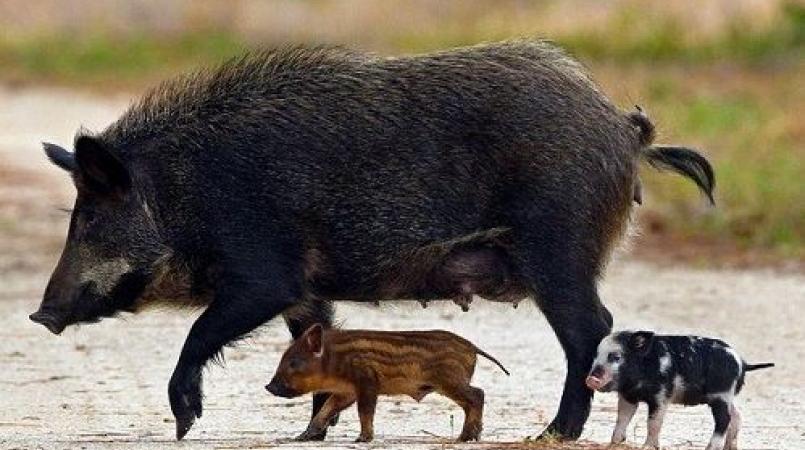 Wildlife biologists are fighting what they call the "ecological train wreck" of wild pigs running amok in Ohio fields and forests.

It's easy to spot the signs that pigs are roaming the Wayne National Forest, say biologists Steve Blatt and Patrick Mercer. Indicators include mud holes dug for wallowing and swaths of soil rooted so deeply it looks like a rototiller came through.

The pigs are so unwanted that federal and state wildlife officials are working to completely eradicate them in Ohio and the rest of the country, The Columbus Dispatch reports (http://bit.ly/2cmfWrQ).

Officials encourage the hunting of feral swine, which is permitted year-round without limits.

"Feral swine are an ecological train wreck," said Craig Hicks, a wildlife-disease biologist with the U.S. Department of Agriculture's Wildlife Services and the Ohio feral-swine coordinator.

Hicks and his team, based in Groveport in suburban Columbus, have trapped and shot wild pigs since 2009. They work with the USDA's Forest Service, which manages the Wayne, and the Ohio Department of Natural Resources' Division of Wildlife to eliminate the animals from public and private land.

Wild pigs compete for food such as acorns with native wildlife including deer, turkeys and squirrels. Pigs' habit of gobbling up acorns also hurts forest-recovery efforts at the Wayne that encourage the growth of oak and hickory trees, Blatt said.

But pigs don't stop at acorns, eating almost anything, Hicks said. That can include insects, grubs, earthworms, mice, rodents and young rabbits, reptiles and amphibians, Hicks said. The eggs of ground-nesting birds such as turkeys, grouse and waterfowl aren't safe, and the swine can even eat the young of large mammals such as deer and cattle, Hicks said.

Their rooting also can destroy forest ecosystems by causing soil erosion and allowing the growth of invasive plant species such as bush honeysuckle or garlic mustard.

Ohio's swine population of fewer than 2,000 is concentrated in southern and southeastern Ohio, particularly in Vinton and Gallia counties, Hicks said.

Nationally, an estimated 6 million feral swine have been reported in at least 35 states. Escaped pigs from farms and hunting preserves have sustained the population by mating with the feral swine.

Hicks uses corn to lure wild pigs into corrals monitored by trail cameras that send images to his smartphone, which he uses to remotely activate a corral gate to drop. Once on the scene, Hicks and his team shoot the pigs, collect blood samples for analysis, gut the pigs and give them to the property owner.