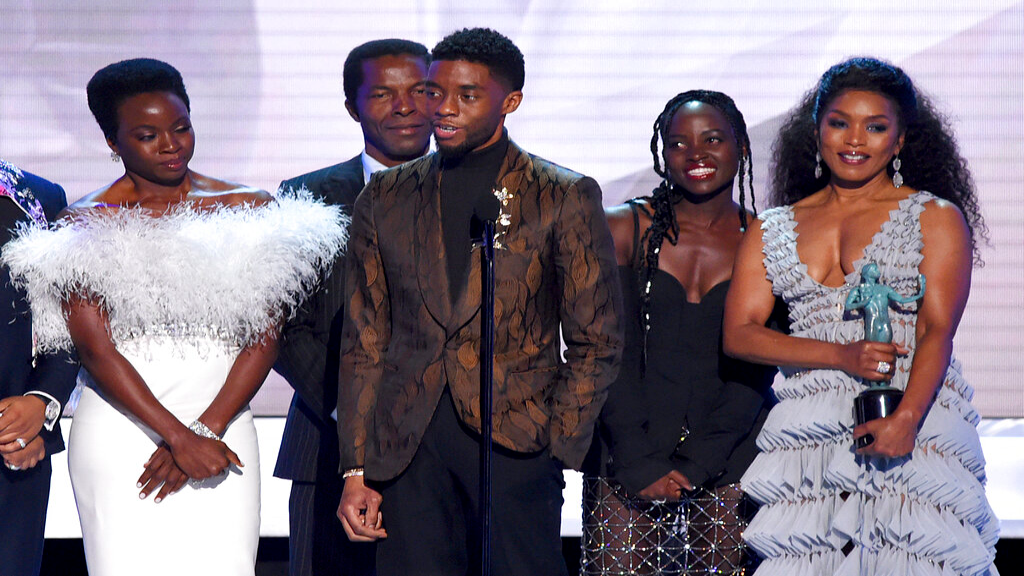 Danai Gurira, from left, Isaach de Bankole, Chadwick Boseman, Lupita Nyong'o and Angela Bassett from the cast of "Black Panther," accept the award for outstanding performance by a cast in a motion picture at the 25th annual Screen Actors Guild Awards at the Shrine Auditorium & Expo Hall on Sunday, Jan. 27, 2019, in Los Angeles. (Photo by Richard Shotwell/Invision/AP)

The two leading Oscar nominees — "Roma" and "The Favourite" — were bypassed by the actors guild for a best ensemble field that also included "BlacKkKlansman," ''Crazy Rich Asians," ''Bohemian Rhapsody" and "A Star Is Born." Although "Black Panther" wasn't nominated for any individual SAG Awards, it took home the final award at the Shrine Auditorium in Los Angeles.

Before a stage full of actors, Chadwick Boseman tried to put into context the moment for the trailblazing "Black Panther," which also won for its stunt performer ensemble. "To be young, gifted and black," he said, quoting the Nina Simone song.

"We know what it's like to be told there isn't a screen for you to be featured on, a stage for you to be featured on. ... We know what's like to be beneath and not above. And that is what we went to work with every day," said Boseman. "We knew that we could create a world that exemplified a world we wanted to see. We knew that we had something to give."

In the lead acting categories, Glenn Close and Rami Malek solidified themselves as front-runners with wins that followed their triumphs at the Golden Globes. The 71-year-old Close, a seven-time nominee but never an Oscar winner, won best actress for her performance in "The Wife." In her speech, she spoke about the power of film in a multiscreen world.

"One of the most powerful things we have as human beings are two eyes looking into two eyes," said Close. "Film is the only art form that allows us the close-up."

Malek, winning best actor over Christian Bale ("Vice") and Bradley Cooper ("A Star Is Born") for his performance in "Bohemian Rhapsody," seemingly sealed the Oscar many are predicting for him. Malek's awards are mounting even as the director of "Bohemian Rhapsody," Bryan Singer, is facing multiple accusations of sexual assault with minors. Singer has denied the claims.

As he did at the Globes, Malek dedicated his award to Mercury.

"I get some power from him that's about stepping up and living your best life, being exactly who you want to be and accomplishing everything you so desire," said Malek.

More surprising was Emily Blunt's best supporting actress win for her performance in the horror thriller "A Quiet Place." Blunt, also nominated by the guild for her lead performance in "Mary Poppins Returns," was visibly shocked. She wasn't among Tuesday's Oscar nominees for either film.

"Guys. That truly has blown my slicked hair back," said Blunt, who praised her husband and "A Quiet Place" director John Krasinski as a "stunning filmmaker." ''Thank you for giving me the part. You would have been in major trouble if you hadn't."

The Amazon series "The Marvelous Mrs. Maisel" won the first three awards handed out Sunday, sweeping the comedy series awards. It won best ensemble in a comedy series, as well as individual honors for Rachel Brosnahan and Tony Shalhoub, whose win was a surprise in a category that included Bill Hader ("Barry") and Michael Douglas ("The Kominsky Method").

"We cannot thank you enough," said Shalhoub, speaking for the cast. "Stay with us."

Tom Hanks presented the lifetime achievement award to Alan Alda , who in July revealed that he had been living with Parkinson's disease for more than three years. The 83-year-old actor took the stage to a standing ovation while the theme to "M.A.S.H" played. He said the award came at a reflective moment for him.

"I see more than ever now how proud I am to be a part of our brotherhood and sisterhood of actors," said Alda. "It may never have been more urgent to see the world through another person's eyes. When a culture is divided so sharply, actors can help — a least a little — just by doing what we do. And the nice part is it's fun to do it. So my wish for all of us is: Let's stay playful."

For the second time, the cast of "This Is Us" won best ensemble in a drama series. Other TV winners included Sandra Oh ("Killing Eve"), Darren Criss for "Assassination of Gianni Versace", Jason Bateman ("Ozark") and Patricia Arquette ("Escape at Dannemora"). Arquette thanked Special Counsel investigator Robert Mueller "and everyone working to make sure we have sovereignty for the United States of America."

The SAG Awards had one thing the Oscars don't: a host. Emcee Megan Mullally kicked off the awards by tweaking their role among the many honors leading up to next month's Oscars. She called the SAGs "the greatest honor an actor can receive this weekend."

The show did not boost the chances of other Oscar hopefuls, "A Star Is Born," ''The Favourite" and "BlacKkKlansman," which were all shut out Sunday night.

Among the attendees Sunday was Geoffrey Owens, the "Cosby Show" actor who caused a stir when he was photographed working at a New Jersey Trader Joe's. He was among the performers who began the show with the SAG Awards' typical "I am an actor" testimony. The SAGs also made time for one reunion: "Fatal Attraction" stars Michael Douglas and Glenn Close joined each other on stage as presenters.